Ying is one of the main characters in BoBoiBoy and BoBoiBoy Galaxy. She is part of BoBoiBoy's Gang and is Yaya’s best friend.

Ying is a good friend of Yaya. At her first appearance, Ying was shown as a shy and a cheerful person. After Ying was given the Power Band by Ochobot, she gained the power of Time Manipulation and with her power, Ying could run around the world in the blink of an eye without feeling tired. This also makes it difficult for the enemies to capture Ying.

At Rintis Island Primary School, Ying was a strong rival to Yaya when it came time for the test, making them compete for the first position. However, they still respect each other and still maintain their close friendship.

In the Movie, when Ochobot was kidnapped by Bora Ra's team with the intention of using it to find Klamkabot, an ancient and powerful Power Sphere hiding in Earth. Ying helps her friends to save Ochobot and at the same time reveal the secret behind the mystery of the Power Spheres.

Three years have passed since the events that took place in the movie, Ying returned to Rintis Island with Yaya after traveling with their families. They were later appointed by Koko Ci to be the Lance Corporals in the TAPOPS team to help other members find and protect the Power Spheres scattered throughout the galaxy.

Ying successfully snatches EggaBot from Adu Du when he stoles it from BoBoiBoy. After completing their mission, they were given permission to return to Earth. Once on Earth, they receive an emergency message from Koko Ci warning that Retak'ka has returned, and directs them to go to Planet Quabaq.

Ying is a young girl with approximately shoulder-length black hair tied in pigtails with yellow hair bands, light skin, and grayish blue (previously brown in Season 1) eyes. She sports a yellow and orange vest with a light blue and white horizontally striped shirt underneath. She wears a pair of dark blue jeans with yellow laces on the side that goes on until the bottom of her knees. She also wears a pair of blue glasses on her head, along with a yellow and light blue beanie with two pins on it. She also sports strap-on yellow, orange and white shoes. Her power band is in the shade of yellow and light blue and is located at her wrist.

Now older, Ying is much taller and more lithe compared to when she was younger. She retains her old hairstyle. Ying now wears yellow, presumably, overalls with light blue short sleeves that goes on until the bottom of her knees. She also wears her blue power bands on top of yellow, finger-less arm bands that goes up until her elbows. She also wears a dark gray and blue fanny pack around her waist. Ying also wears gray and blue knee pads and strap-on boots with yellow and blue straps, along with blue socks underneath it.

Ying is an energetic and happy girl at heart. She is always eager to jump in to help others and her hyperactive nature translates to her Time Manipulation powers. She talks fast and can be very impatient at times, wanting to get things done quickly.

She is sensitive to other's feelings, but can also be fairly shy, sometimes too shy to even talk to people face to face. Her lack of confidence in herself can hamper her own abilities, like when she sneezes she loses her abilities.

However, as she grows older in Season 2 and onwards, she outgrows this reticence and becomes much more extroverted and confident in her abilities. Ying is a short-tempered person, and sometimes impatient. She is scared of losing people that's close to her, and would prioritize other people first before herself. That's how kind Ying is, but she doesn't show it to a lot of people.

Ying is given her powers by Ochobot and believed that her power was Super-Human Speed, until it is revealed that she has the power of Time Manipulation. This allows her to slow the speed at which the objects around her move, giving the illusion of her having super-human speed when she is actually running at a normal pace. She can also slow down or speed up people and objects within her certain controllable radius.

The only drawback to her ability is that it consumes a large amount of power and she has a limit as to how long she can alter time, indicated on her watch. In the original series, her power used to be inhibited when she sneezed and/or lost her confidence, only by sneezing and/or getting through her nervousness again could she retrieve her power back, but some time between Season 1 and Season 2, this weakness was outgrown.

Ying is a very smart individual, having skipped one grade in school, as confirmed by Gopal (Season 2, Episode 3). Being partly Chinese, she is able to speak Chinese and has said phrases and words occasionally during the show.

Although not applicable for combat, she is known to be an excellent gamer, said by Yaya to be the only one who was able to defeat the final boss of Papa Zola No.5 video game.

BoBoiBoy Wiki has a collection of images and media related to Ying. 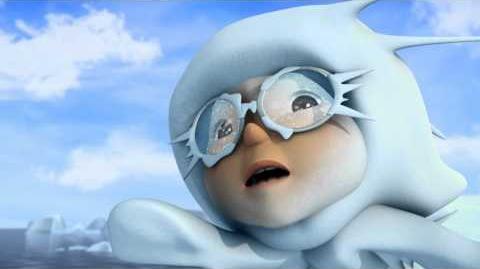