Yaya Yah, nicknamed Yaya (or Hanna in English incarnations), is one of the main characters in BoBoiBoy and BoBoiBoy Galaxy. She is a part of BoBoiBoy's Gang.

Yaya makes her first appearance, greeting BoBoiBoy as he makes his way to Tok Aba's cocoa shop. She, alongside Ying and Gopal later befriended him and became one of the superheroes from the team.

In school, due to her excellent academic and non-academic achievements, she became the President of 5th Grade and the President of every club. The school gave her the wall of success. Gopal also explained to BoBoiBoy about Yaya's Wall of Success (Season 2, Episode 4).

In the movie, Ochobot was kidnapped by Bora Ra who had the intention of using it to find Klamkabot; an ancient and powerful Power Sphere hiding in Earth. She and the others go to save Ochobot and at the same time reveal the secret behind the mystery of the Power Spheres.

Yaya returns in BoBoiBoy Galaxy as one of the members of TAPOPS. She and Ying both return from vacation just in time to join BoBoiBoy on his Galaxy Adventure. Yaya joins TAPOPS as a Lance Corporal alongside Ying.

Yaya successfully rescues Gopal from the Giant Penguin while the others stop Adu Du and rescue EggaBot. They were given permission to return to Earth. Once on Earth, they receive an emergency message from Koko Ci warning that Retak'ka has returned, and directs them to go to Planet Quabaq.

In the original series, Yaya wears a pink fuchsia long sleeve shirt, yellow vest, with small red flowers on the top, and magenta long trousers. She also wears light yellow shoes, her pink power watch that Ochobot gave to her, fuchsia pink belt, and a pink hood (hijab) with yellow flowers. In addition, she has a pair of goggles on her head that she never actually uses.

In Season 2 and 3, she wears the same outfit as Season 1 except the fact that she has a flower clip on her hood and a pink belt around her waist.

Although she hasn't been seen without her hijab on screen, concept art of her reveals that she has wavy brown hair underneath.

Now much older, Yaya is much taller and noticeably more mature than how she looked in the original series. She has long pink sleeves on a white blouse and a yellow belt with a small flower decorated bag hanging on her right waist, along with a pair of brown pants. She also dons a pair of yellow goggles in place of her old ones. Yaya wears a pair of white and pink boots. Her hijab style has changed as well. She wears her power watch on her right wrist, and a yellow bracelet on her left wrist.

For most of the series, Yaya is shown to be one of the kindest and smartest members of the team. She is very hesitant to hurt other people and when she had first gotten her powers, she apologized for attacking Adu Du to defend her friends. Despite her kind demeanor, she is not hesitant to fight and is one of the first people to jump in when BoBoiBoy is in danger. As shown by her numerous academic achievements, Yaya is hardworking, responsible, and a smart individual, always working at the best of her abilities.

A running gag is Yaya's inability to cook edible cookies and biscuits, where she gets upset when friends and people alike avoid having to eat her cookies. She doesn't seem to understand why her cookies are inedible but regardless gets excited when people 'enjoy' her baking.

Due to Ochobot losing part of his memory, her abilities were at first thought to be flight and super strength, when her actual power is Gravity Manipulation (Gravikinesis). With this, she can master gravity and release it, which gives her the supposed 'super strength'. Yaya also manipulates her own gravity, giving the illusion of flight.

While her abilities stay mostly the same, Yaya's boots now glow when she's using her powers, particularly her 'flight'.

Yaya's boots are glowing as she's using the power.

Yaya's using her power to stop the Gurunda Monster.

Her boots are glowing when she's creating a Bubble Ferrokinesis.

Being the class president and captain of all the clubs in just fifth grade, Yaya is shown to have some strong leadership skills, as well as being intelligent and responsible 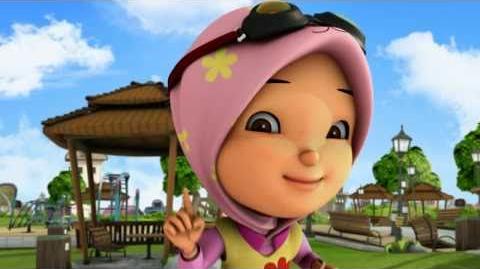 BoBoiBoy Wiki has a collection of images and media related to Yaya Yah.