BoBoiBoy and his friends are given a mission by Maripos to sneak into Kupuri Castle to save Kuputeri. For that, they have to weather the Cyclone that protects the palace. Can they reach Kupuri Palace safely? And what do they have to do to face the threat of Five Generals in order to save Kuputeri?

Kuputeri in a chained state was brought before Reramos on the throne of Kupuri Palace which was also attended by Muskida. Kuputeri threatened that Reramos would be defeated today and tried to fight the elite guard who restrained her, but was eventually subdued by the Kelkatoan Army who held her with chains.

When asked about their mission, Maripos replied that they were required to climb to the top of Kupuri Palace to activate the Signal Crystal for the opposition group. He added that he will be waiting at the edge of the Cyclone and together they will go through a secret route. Gopal was terrified that he might have to face Five Generals other than Muskida, but the others persuaded him to persevere, as the ship entered the palace airspace.

Kuputeri was shocked and asked how Emperor Reramos was able to control the Kelkatoan Army, and he replied that he used the Mace of Light in his grip to control Kelkatoan to obey his orders. Reramos also demanded Kuputeri’s help to unlock absolute control on the Signal Crystal with the aim of doubling the power of the Mace of Light so that all disobedient and rebellious citizens would submit to him. Kuputeri objected because the Signal Crystal was used as a guide, not a tool to control the minds of the people, yet Reramos insisted on finding a way to uncover the secret to accessing the Signal Crystal.

Meanwhile, BoBoiBoy and friends have entered the palace and are passing through the foyer with the guidance of a map read by Ying. Suddenly, they were confronted by two of the Five Generals: the slender-bodied General Vespira and the large-bodied General Karumbang. Despite being persuaded by BoBoiBoy to be patient, Fang gets furious and fuses with Shadow Bear to fight, aided by Yaya and Ying with their respective powers, but are all overthrown by the two generals.

BoBoiBoy got angry and turned into BoBoiBoy Thunderstorm, wielding Thunder Blades to oppose General Vespira who wielded the Stinging Sword. Suddenly, the floor melts, then BoBoiBoy turns into Quake to stop the melting. Two generals attacked Quake. So BoBoiBoy and the others are forced to flee.

The gang had to find another route to the Signal Crystal because the planned route had already been blocked by the General Vespira. Suddenly, a light came out of the key in Fang's storage given to him by Papiliam. Then Fang is called to follow the key signal that leads them to a room in the palace that Papiliam says holds something special.

Two generals assigned against the gang are scolded by Muskida for failing to capture them, but argue that they have no other way to reach the Signal Crystal. Suddenly, the hall door is slammed by the Gravity Shield, and the appearance of the BoBoiBoy's gang wearing knight armors. Ying blocked Kelkatoan Army forces with her powers. The Five Generals realized that the team is wearing the legendary Windara Knights armor from Papiliam's old room. However, their attire was not too perfect: Gopal had difficulty with his hard hat blindfold, while Fang wore an armor that had four extra sleeves.

Regardless, BoBoiBoy vows in front of the Five Generals that they will save Kuputeri and Planet Windara. Then began the most important battle that determined Windara's fate: BoBoiBoy turned into BoBoiBoy Blaze and summons Fire Sword, while Yaya and Ying attacked to bring down the siege of the crowded Kelkatoan Army Elite Guards. Gopal tried to help by using the large hammer that came with his shield but faced difficulties. Fang eventually took advantage of four additional hands using the Shadow Hand.

Gopal is threatened by General Vespra's acidic Stinging Sword, so Yaya tells BoBoiBoy to help Gopal while he confronts the General Vespira. Meanwhile, Fang summons the Shadow Tiger towards General Karumbang, but Karumbang easily repulsed the attack. Gopal was still struggling with his hammer while taunting Fang for having a hard time overcoming the General. Karumbang attacked and almost hit Fang and Gopal. Fang summons Shadow Gorilla Fusion and attacked throwing Gopal like a ball towards Karumbang, then Gopal uses Rubber Candy Transformation to block his opponent's movement, and finally Fang cracked Karumbang's armor.

Ying struggled with the fast Sibella, using Slow-Mo Speed to slow down the enemy's movement. At the same time. Yaya attacked Cikala, but was saved. BoBoiBoy, on the other hand, fought hard against the sword with General. After being taunted for having a hard time overcoming it despite wearing Papiliam's leftover armor, BoBoiBoy turns into BoBoiBoy Thorn and uses Ensnaring Thorns to restrain General Vespira, then releases Tumbosaur to defeat his enemy.

After overcoming the obstacles of General Five, the BoBoiBoy's gang heads to the throne room to meet the Princess. There they met the figure wearing the robe of Kuputeri, but it turned out that Muskida was in disguise, the throne door was locked, and they had entered the trap of Reramos who appeared and greeted them at the top of the palace. BoBoiBoy threatens Reramos to release Kuputeri not wanting to be threatened by the rebels, but Muskida explains that all the rebel threats, even Maripos have been thwarted with the help of his fly spies. 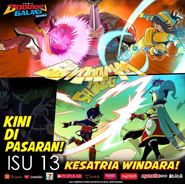 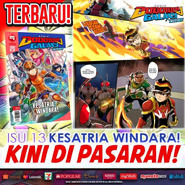 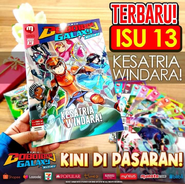 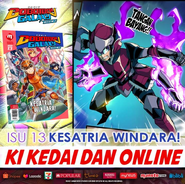