Wak (by Adu Du and Probe)

Wak Baga Ga is a character in BoBoiBoy. He is an illegal shaman on Ata Ta Tiga and one of the Five Scammer Commanders.

Baga Ga came to Cube Fortress claimed to recover Probe's memory. But, Adu Du thinks he was Bago Go disguised. Then Computer was doing a structure analysis about Bago Go and Baga Ga, with the results of 99% similarity to Bago Go and 1% similarity to Baga Ga. When Baga Ga checked Probe's body, he found out a wire was not plugged. But he lied to Adu Du by stating that Probe's memory was in the 7th stage before the 8th stage which is chronic if not treated. Baga Ga proposed to do hypnosis by hypnotizing Probe using his chain pocket watch while Adu Du retelling his memories and relationships with Probe since first met.

After the hypnosis, Baga Ga suggests Probe to use his "Magical Scared Tongkat Bayam Wisdom Medicine". It can be used by applying to the affected area 30 times a day. But Baga Ga explained that this medicine would be effective if they use the "magical cherry-brown wooden cup", using the steel cup would lose the effectiveness. Adu Du then tell the price about the cup, Baga Ga answered that the cup price is RM80,000,000.80, making Adu Du topple to anxiety. At outside, Baga Ga gave the medicine and magical cup to Probe. Baga Ga said to Probe to call him for the updates. Then Baga Ga give the receipt to Probe by opening Probe's hood and reconnect the wires, causing Probe's memory were restored.

Baga Ga came to Earth with all his brother because Adu Du and Probe tricked Baga Ga to refund all his money and bring back his Spaceship. 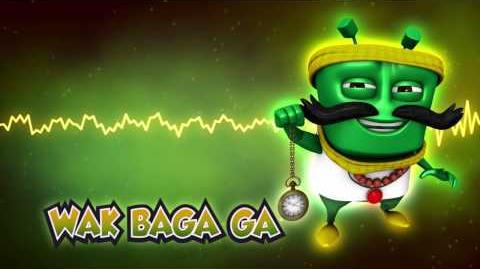