BoBoiBoy and friends accept an invitation from Maripos and Kuputeri to see for themselves the situation on the war-torn Planet Windara. The mastermind of all this chaos is a power-hungry criminal, along with his hordes of armies.

But Maripos' plan has been successfully sniffed by the villain. Can the Earth heroes arrive on Planet Windara safely? Or will they be killed by the violent storm Windara?

BoBoiBoy and his friends Yaya, Ying. Gopal and Fang, went with Kuputeri and Maripos on Kuputeri's spaceship guided by Maripos to head to Planet Windara. Gopal suggests that they should go there via Ochobot teleportation, but BoBoiBoy denies saying that it consumes a lot of energy with Ying greeing.

During the journey, on being asked by BoBoiBoy, Kuputeri explains that after being defeated and by Retak'ka, she wrapped her body in a cocoon to treat injuries to herself, but she was too weak to come out. When she came out of the cocoon after 100 years, Planet Windara was once ruled by his relatives had been overrun by a ower-hungry ruler named Reramos and her people lived in misery. Gopal asked why Maripos looked young, he said it was a secret.

Kuputeri continues saying, she travels to Earth to meet BoBoiBoy after she heard that he had defeated Retak'ka. She told BoBoiBoy that she wants to reclaim the power of tempest to save er planet. BoBoiBoy hesitates because he needs Wind power to protect the galaxy from enemy threats. Maripos said they only needed one from seven BoBoiBoy powers, but Kuputeri advised to be patient.

Kuputeri's spaceship enters the atmosphere of Planet Windara which is bright and adorned with lightning clouds. On asked why he chose such dangerous route, Maripos said it was the safest route from patrol boats and did not dare to be traversed by the enemy. Later, Maripos told everyone to be prepared because the trip would be uncomfortable, but assured that they would be safe past.

Unfinished through the storm clouds, they spotted two patrol boats following them from behind and opened fire. The Spaceship was not a warship and cannot retaliate, but instead Maripos drives the spacecraft agilely so as to escape the threat of enemy ships. Upon coming out of the storm clouds, they receive a transmission from a large insect-eyed creature that reminds Maripos that the spies are always watching their movements, and have even become aware of their special guests.

BoBoiBoy asks who it is in the transmission, and the creature introduces himself as Muskida, an adviser to Emperor Reramos, "Bearer of the Mace of Light and Conqueror of the Great Windara". Kuputeri replied that they were all ready to free Windara, but Muskida ordered that she should tell it to Reramos erself At the same time, the Kuputeri spacecraft was hooked from behind by the Reramos army. Muskida told Kuputeri to surrender and come along peacefully, but Kuputeri refused, so Muskida instructed that he had to treat Kuputeri rudely and end the transmission. Shortly afterwards, the spacecraft was pulled back and controlled by the Kelkatoan Army.

Maripos described the Kelkatoan Army as a nation hostile to the people of Windara, violent but weak-minded. BoBoiBoy invites Yaya and Gopal to follow him to destroy the hook. After boarding the top of the ship, BoBoiBoy tells Gopal to change the hooks to biscuits. Gopal asks for chocolate biscuits or Yaya biscuits, and BoBoiBoy grumbles that Yaya's biscuits are too hard; the conversation caught Yaya's attention and was silenced. Before Gopal could transform, the three of them were attacked by the Kelkatoan Army.

BoBoiBoy turns into BoBoiBoy Blaze and tells Yaya to protect Gopal while he delays the enemy's attacks. Blaze attacked the Kelkatoan Army, aided by Yaya and Ying. Gopal urged to quickly change the hooks to food, but didn't find way. Kuputeri and Maripos joined the battle and Gopal transformed the hooks.

Muskida appeared at the door of his spaceship with four other colleagues to once again invite the princess to board his spaceship. BoBoiBoy plans to fight them but is stopped by Kuputeri because they are the Five Generals, the leaders of the Kelkatoan Army, and this is not the time to confront them. Muskida orders two generals, Cikala and Sibella to capture Kuputeri, but BoBoiBoy is ready to defend her. Yaya charged but was knocked down by General Sibella. Fang in turn helps by fusing into Shadow Tiger while BoBoiBoy turns into Quake. General Cikala returned the attacks and uses his powers to deafen them.

Kuputeri tells Maripos to help BoBoiBoy and his friends while she goes to prepare an emergency pod to escape while being accompanied by Gopal. General Berlima also realizes Kuputeri is trying to escape and act, but is stopped by Yaya, Fang and Maripos. Maripos tells Ying and Yaya to go to the emergency pod while dealing with Sibella and Cikala with the help of BoBoiBoy Quake who is trying to put Kuputeri's safety first. Maripos performs Double Illusion to split into a swarm of butterflies to escape, while Quake summons various attacks to defeand them all.

Everyone gathered in the emergency pod room. Ying, Yaya, and Gopal ride a pod with Maripos. Suddenly the anxiety pod was attacked. Kuputeri hurriedly stuffed BoBoiBoy and Fang into the remaining pods and sent them away without her. In an emergency pod that took off heading out of nowhere, BoBoiBoy tearfully watched from afar Kuputeri be captured by the Five Generals. 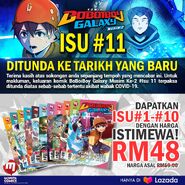 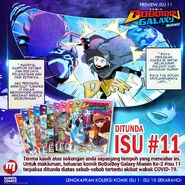 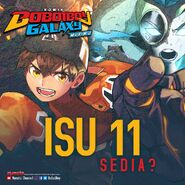 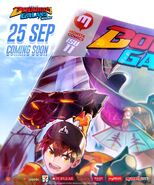 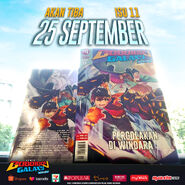 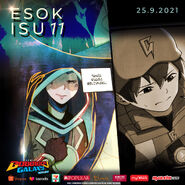