In an attempt to look for data on BoBoiBoy Light, BoBoiBoy and friends must solve riddles given by a giant robot named Jagara who guards a crashed and abandoned space archive.

The episode starts with Ying and Yaya heading to TAPOPS Library to study. There they noticed Gopal and BoBoiBoy sleeping. BoBoiBoy explains to them that they were studying on power spheres all night to find info on his light elemental power, but they didn't find any. Suddenly Commander Koko Ci appears of nowhere telling them that there is a power sphere that has the information on all power spheres ever created but no one knows it's location and is presumably destroyed. Admiral Tarung then appears and tells them that DataBot's last location was on Planet Junkberg. The team, after gaining permission headed towards the said planet.

After reaching Planet Junkberg (safely this time), the team went out in the market to look for information about the spaceship archives, with the possibility of DataBot's inside it, but found none. Finally they know about a spaceship that crashed there several years ago. Upon reaching there, they were stopped by a huge old styled destroyer robot; Jagara, who is the keeper and guard of the archives. He gave them three options to choose if they want to enter the archives. Firstly, they had to answer his three intellectual questions, or secondly, they should defeat him in battle, the third one was rather a joke because he said that they have to invent a time machine and go to the time when he wasn't created and enter the library. The team, after a conversation, chooses the first option to answer his three riddles.

The first question was as follows, "I have a skin, but no hair. I have a spine, but no bones. I have tale, but no mouth." This question was answered wrongly by Gopal who suggested a horse. Lastly, they took their first lifeline which was to call a person for the answer. Gopal hurried in this too and called his father and asked the question wrongly. They were saved as Yaya answered correctly saying the answer is book. A book has skin but no hair. It has a spine but no bones and it has a tale to tell but with no mouth. The first question was answered.

Jaguars happily congratulated them. He asked the second question. "Ahmad's mother has five children. Monday, Tuesday, Wednesday, Thursday........What is the name of the fifth child." Gopal tried to answer Friday, but BoBoiBoy stopped him in time. Again, they used the second lifeline. It was a multiple choice. The options were, A. Friday B. Saturday C. Sunday D. Ahmad Ying answered this one, Ahmad. In the question, Ahmad's Mother obviously means Mother to Ahmad. Jagara congratulated them again and moved to the next question.

As for the last question, it was a puzzle actually. Jagara made four boxes with rods and told them to make them three by moving only three rods. They took their last lifeline by which they were able to ask any passer by, which turned out to be Papa Zola who was finding them. Papa Zola, on asking, set Ying and Yaya to follow his instructions to solve the puzzle. He messed up, moving thirsty metal rods not three and formed a cube. BoBoiBoy saved the situation by stopping a enraged Jagara and split into the original trio, Lightning, Wind and Earth. With Earth commanding them, Lighting and Wind placed the rods as we're requested, thus solving the problem and earning them the key to the archives.

The team finally entered the archives and founded it loaded with books. They met a old looking robotrobot who introduced himself to them as DataBot. BoBoiBoy asked the question he gone through all this to find the answer of. How to unlock his light element. DataBot agreed and started processing. The gang waited for his answer for five days but with no avail. Disappointed, they returned to TAPOPS Station where Admiral Tarung was astonished to saw them succeed. DataBot was still processing. Tarung told them that they have more important things to do. When the left, DataBot completed his process and answered that to unlock the light element BoBoiBoy has to increase his intellect but the only person's listening to him were Cattus and Papa Zola which was no help. 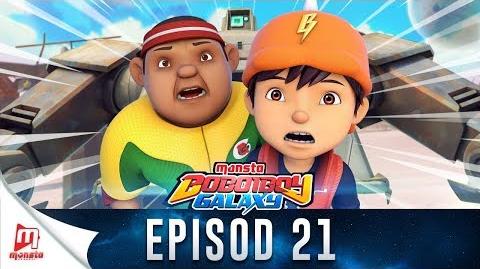