The 5 Commander Scammers (5 Panglima Scammer) is the 8th episode of Season 3.

BoBoiBoy and his friends are battling with the Five Scammer Commanders which are Bago Go's brothers.

Adu Du's Spaceship had arrived and Adu Du and Probe felt so happy about this. Adu Du answered to Gopal that he have tricked Bago Go to brought back his spaceship. Yaya interrupts that Adu Du and Probe cannot trick persons intentionally as they promised to make nice.

Suddenly, the five combat spaceships was arrived and surrounded with Adu Du's spaceship. Adu Du and Probe wondered why their spaceship have the additional five more spaceships and they thought that Bago Go is insane. The spaceship door were opened and Bago Go was appeared. Bago Go asked everyone to run because his brothers have come and want revenge on Adu Du and Probe because they have cheated Wak Baga Ga. Bago Go also told Adu Du that he have fooled their ancestry, thus Adu Du is the first person to do so.

BoBoiBoy asked Bago Go about the spaceship that was purchased by Ejo Jo first. Bago Go replied that BoBoiBoy has injured Ejo Jo severely, causing him to enter Bago Go's hospital. He owed the hospital fees because they were too expensive. So he mortgaged the spaceship back to bear the cost.

Bago Go told everyone including himself to run away to survive from his furiously brothers. Fang asked him why he prompted everyone to run. He replied that they are Bago Go's potential customers who befalls if they handle harmfully from his brothers, causing his revenue streams broke.

At the same time, Bago Go's brothers were having came down and they looked devilish. His older brother shouted to Bago Go that he prompted everyone to run away but Bago Go interrupts them by explaining about curry instead. As soon as Baga Ga looked at Adu Du and Probe who cheated him recently (Season 3, Episode 6), he scolded them and introduced his brothers as the "Five Scammer Commanders"!

Then the brothers introduced themselves. The first one is Bago Go, once again he introduced as the best illegal weapon dealer even it was known by everyone. The second one is Wak Baga Ga, he is an illegal shaman of the world that was known by Adu Du and Probe. Then Baga Ga show his skills by stating Gopal is not feeling well because of his best friend BoBoiBoy, so Gopal insulted BoBoiBoy but interrupted by Yaya.

The third one of the scammer commanders is Bagi Gi, the Intenet scamming syndicate. He lures Gopal by promoting that he have won a red spaceship on the Internet. This make Gopal tempted to sign the form on Bagi Gi's tablet but Ying interrupted them, Fang replied that kids don't have license to drive. The fourth one is Bagu Gu, the "professor of I Love You". He presented romantically to attract the women around the area but BoBoiBoy and his friends are digusted with his characteristics. Finally, the older brother of five brothers and the leader presented himself. Probe guessed his name as Bage Ge, however he replied that his real name was Tom. His name is different than his brothers which uses the same name pattern, hence declared himself as name cheater.

After they introduced themselves, Tom threatened everyone to take away all wealth and properties on Earth because of Adu Du's actions. Adu Du could not wait to stop their goal, however BoBoiBoy acted surprisingly to gave back Adu Du's spaceship to them and convinced Adu Du solely to prevent any violence. Adu Du accepted with BoBoiBoy's decision. Then Tom told Adu Du to apologize their brothers, however, Adu Du refused to apologize. Because of this, Tom gave the spaceship keys back to Adu Du and the Five Scammer Commanders transported to their spaceships. They launched the lasers and attacked the Rintis Island town!

BoBoiBoy and his friends are hiding from their attacks while Ravi announced that the town were attacked. BoBoiBoy used his Lightning Kris to counter-attack the enemies however Tom fired the laser to broke down BoBoiBoy's attacks. Then BoBoiBoy split into three to save the people from danger. Ravi the news reporter continued his work by interviewing an old lady who feeling good by running even during the dangerous situation. Also, Probe transformed into Mega Probe to save a child from being crushed by a shop sign, however Probe accidentally threw the signboard towards Adu Du, making Adu Du crushed.

Adu Du said that the spaceship should set into maximum power and told everyone to fasten it. Then they all rushed to their seats and everyone put on their seat belts, except Gopal that who is out of the seats and he had to cling to Adu Du's injured right shoulder while the spaceship flew at maximum speed. But however, the Five Scammer Commanders are able to catch them with hyperspeed mode each of their spaceships. Later they launched a Missile Barriage filled with Laser Kebabooooooo towards the spaceship of Adu Du. But it was destroyed by the missile by Yaya while Adu Du was languished in pain. However, a one bullet was crashed on a new chicken coop built by the Canteen Lady, And BoBoiBoy is upset to see it through the screen of Adu Du's Spaceship. Ying said that they should find a place where no humans can be harmed. Fang said in the forest, but Yaya refused because many animals will be harmed. Gopal said in the open spaces, sea or South Pole, but Yaya said that there are grasshoppers, fish and penguins to be preserved. Finally Yaya found a place, after escaping Yaya finally found a place that there is no living things can be harmed, in the moon! 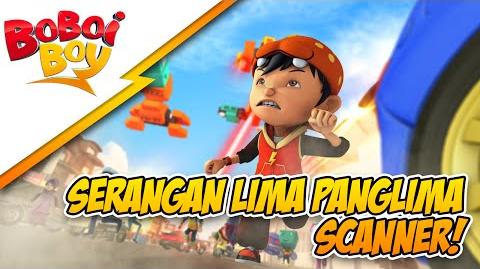 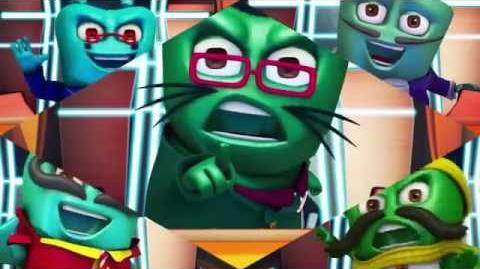