“BoBoiBoy Leaf VS The Pirates”

The group is fighting against Adu Du and Probe who are also searching for Power Spheras when they encounter Cattus, a cat-like creature with an unexpected ability.

The episode begins with Adu Du and Probe watching a commercial online in which Bago Go is trying to market a Power Sphere tracking device. Though the device is free, the battery it runs on is incredibly expensive. Probe purchases the device's battery after Adu Du faints using Adu Du's credit card, much to his dismay, and they travel to Gurunda to find the next Power Spheres.

On Gurunda, BoBoiBoy and his friends are resting around a campfire for the night, having searched for the Power Sphere for two days. Ochobot recharges from teleporting around too much. A cactus-cat alien — that Ying and Yaya find adorable — approaches their fire and eyes BoBoiBoy’s cup of water.

He offers the alien cat his drink, despite Gopal's protests to conserve their supply. Everyone ends up taking a shine to the cactus-cat except Gopal, whom the cat attacks when he tries to chase it off. BoBoiBoy's power band abruptly sparks, confusing him.

That night, Adu Du and Probe enter a cave on Gurunda, having used their Power Sphere tracking device to trace the signal there. They find nothing, but are attacked by an unknown assailant. The next day, BoBoiBoy’s gang tracks the Power Sphere to the same cave, but find nothing but a broken net and signs of a shootout.

A cactus-humanoid alien approaches them in the cave, desperate for water. Ying gives him her share, allowing him to introduce himself as Waibi, a Gurunda native. Waibi requests BoBoiBoy’s gang to help his people deal with a monster that has been terrorizing their village. They accept, and after arriving at Kaktoi village (where another house has been ransacked), Waibi explains that the monster used to get its water from the cacti behind the village, but since it turned into a strange substance (the bubblegum used in the previous episode), it sought water from the Kaktoi people.

Meanwhile, Adu Du is in his ship recuperating from the previous attack. He decides to buy Bago Go’s “Bravery Raisins” in an attempt to capture the wild beast that attacked him and obtain the Power Sphera.

In Kaktoi village, BoBoiBoy’s gang plans to use a large pool of water to lure the beast out. Yaya and Ying will then weaken it enough for BoBoiBoy to detain it, while Gopal reverts the bubblegum-cacti back to normal. While waiting for the beast, they spot the cactus-cat drinking out of the pool. BoBoiBoy tries to get the cat to leave, but Waibi warns him to be careful, revealing that the cat is the beast.

A tranquilizer dart shot by a nearby Adu Du narrowly misses the cat. Ochobot scans the cat for the Power Sphera that Adu Du claimed to have found. BoBoiBoy prepares to engage in battle, but his Power Watch malfunctions and he is unable to transform. Adu Du shoots again, but BoBoiBoy shields the cat and collapses. The enraged cat transforms into a huge feline beast and charges at Adu Du. Ochobot realizes what the cat really is and tells Yaya and Ying to protect it, but Probe arrives to hinder their progress.

The beast attacks Adu Du, and is about to deal the final blow, but Probe stops it, having defeated both Yaya and Ying. Despite its ferocity, the beast becomes fascinated with the Energy Binds and starts playing with them and Probe, giving Adu Du an idea. He lures the cat with his gun’s laser guide into his trap, making it revert to its smaller form. BoBoiBoy, now awake, resolves to save the cat, and manages to get his Power Band working to perform his Elemental Split. BoBoiBoy succeeds in driving Adu Du and Probe off, and saves the cat.

Later, Gopal finishes reverting the bubblegum-cacti. Waibi thanks them for helping them deal with the beast, but he warns Gopal against transforming their cacti again. While the cat entertains Yaya and Ying, Ochobot explains to BoBoiBoy that the cat's bell and collar are actually a Power Sphera. The bell turns around introduces himself as BellBot, the Power Sphere of Enlargement.

BellBot admits that he didn’t reveal himself earlier because he was unsure whether or not they were the Power Sphere hunters he had been fleeing when he crashed on Gurunda. The cactus-cat — whose name he reveals is Cattus — had been the first creature he’d met on the planet, and they began a symbiotic relationship, with BellBot bestowing Cattus with powers in order to protect BellBot and itself from the approaching hunters.

They offer BellBot the chance to return with them to TAPOPS where he can be properly guarded, but BellBot insists on staying with Cattus. Ying laments that Koko Ci will not be pleased with their lack of a Power Sphera, but BoBoiBoy and Ochobot assure her that he will understand as long as the mission was completed.

After bidding farewell to their friends, they return to Earth. Gopal is relieved that he doesn’t have to deal with the 'furious cat', before it’s revealed that Cattus had grown fond of them and followed them through the portal. Koko Ci approaches to congratulate them on their first mission's success, but accidentally steps on Cattus' tail. Furious, Cattus transforms and chaos ensues. 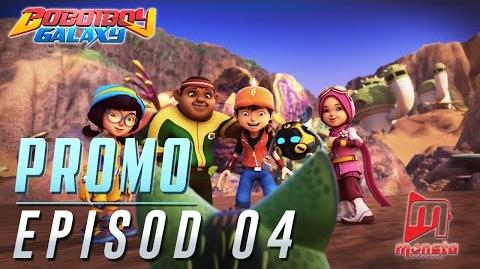 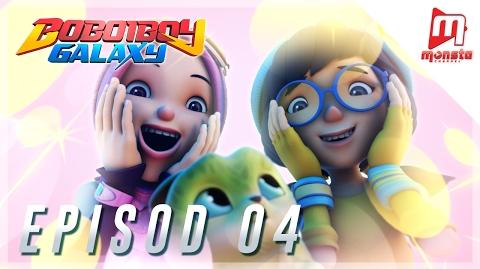