The Battle on the Moon (Pertarungan Di Bulan) is the 9th episode of Season 3. The Five Scammer Commanders have built the MegaBot ScamBot and battling with Adu Du's SampahBot made from Spaceship A80.

Yaya and Ying are piloting Spaceship A80 and were arriving later on the moon. BoBoiBoy asked Yaya about the arrival. She says that the moon is the safest place because there is nothing. Suddenly, the reporter and his cameraman trap in the spaceship door. Soon, Probe saved them and bring them inside the ship. Adu Du questioned them; suddenly they follow him to know his plan to defeat the Five Scammer Commanders. They were trap outside the spaceship and only step in the window. Poor Gopal tell his sadness Papa Zola and his father, Mr. Kumar, but suddenly, the Five Scammer Commanders were attack the spaceship directly. But, it was break with the commercial of Dong-dong robotic toy that sell on 20 cent and made Papa Zola mad because he worried about himself and his students.

The Scammers attack the ship many times and make it unstable, and the Five Scammer Commanders unite themself and create MegaBot ScamBot. BoBoiBoy ask Adu Du about the spaceship morph to robot. Adu Du tell that it will need a huge power of electricity to activate the robot form. Then, BoBoiBoy Thunderstorm goes to the power room and use his power to activate the robot. When it activate, suddenly it form as a trash-like robot called SampahBot and need around 5 hour to transform. The live action also reported by Probe from the moon. Adu Du plan to punch the robot by summon Punching SampahBot, but it was very slowly because of the gravity in the moon. The MegaBot ScamBot reply with Uppercut Punch and flought the SampahBot far away from the moon. This attack damaging liver of the robot.

The robot got attack again by XYZ3000 and damage the joint in the shoulder. It turn normal by Yaya's gravity power and Ying's time power. They also replied by using Folded Scissor Kick. Almost add with Trash Hit Kick, the MegaBot ScamBot move quickly and the battle turn more awesome. SampahBot got attack by hitting bullet and SampahBot reply it by mutiple punch via BoBoiBoy's Thunderstorm power. Mad Tom then summon Technomagic Spear and slice SampahBot with Cruthes Movement. Mad BoBoiBoy summon the Thunderstorm Raker and attack with Storm Trash Scratches and shock the Five Scammer Commanders, but they replied with by mutiple bullet and damage the waist area. See the sun rises, Fang activates the wing part and create SampahBot Wing X and damage some of MegaBot ScamBot's robot part.

MegaBot ScamBot replied it with Under Trap Cannon Shot and damage all of SampahBot part except the finger on the right hand. BoBoiBoy gives his idea to Gopal to turn the moon rocks to jewelries and diamonds. The Five Scammer Commanders come to the jewelries and forgot their fighting. Under their unconsciousness, Adu Du expropriate the MegaBot ScamBot and step the scammers and end up the long battle. After that, Ravi J. Jambul ended the report and the credits appeared. But a few seconds later, Probe interrupted the credits and telling all they cannot return to the Earth because both MegaBot ScamBot and SampahBot are already destroyed. 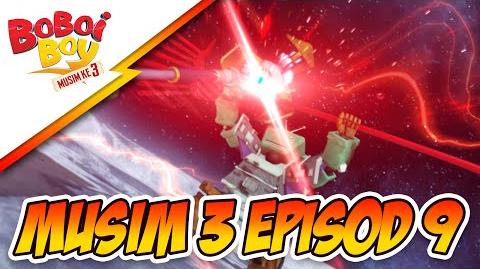 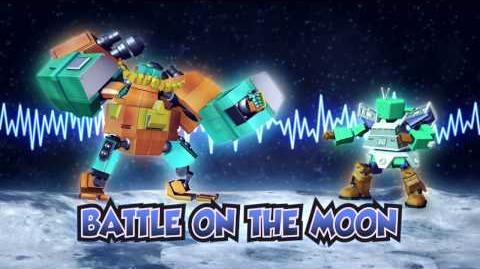 BoBoiBoy OST Battle On The Moon