The Mysterious of the Arsonist

The Arsonist (Misteri Penjenayah Api) is the 15th episode of Season 3. It debuted the new form of BoBoiBoy, BoBoiBoy Fire and resolving the cases of recent fire incidents.

Adu Du and Probe was shocked to see a mysterious figure has the power that never will be mistaken by them: a powerful strength of the element fire.

Two days earlier, in Tok Aba and BoBoiBoy's Kokotiam, Gopal seen watching the animated series "Detective Konon" and proud to see the scene and want to be a detective when he was adult. Ochobot, Ying and Yaya was disappoved it. Suddenly, the show was change to a TV33 breaking news about events fire in five different places in the adjacent. One of which is the Rintis Island Primary School. Gopal comment that it was because of the climate, but Ying disapprove it and said that it was a raining season. Suddenly, BoBoiBoy walk slowly and faited. Then, Tok Aba give his grandson ice chocolate to cure him. Gopal then take the ice chocolate and scrambling with BoBoiBoy. Then, the TV show crying Papa Zola that was been interviewed by Ravi J. Jambul. He said that the math test paper was burned since the fire accident. Papa Zola wanted to have math retest in 15 August.

The heroes was happy, then Fang come to the shop and said that he will fix the answer because he answer it wrong. Then, BoBoiBoy plan to investigate the fire accident until know the answer. Their plan was heard by Probe that watch them from gazebo and tell Adu Du about BoBoiBoy's investigation plan. In Cube Fortress, Probe telling Adu Du about BoBoiBoy's plan. He said that it was started because of a sabotage. He plan to search the mysterious person and having the teamwork.

The next day, the investigation of cases of fires started from home Canteen Lady. According to her, on the morning of the event he plans to feed the chickens behind the House. He then saw chickens panic and fuss. Was apparently chicken coop belonging to her burn. Gopal accuse she burn her own hen house, but the heroes disapprove it. Investigation continues in warehouses belonging to the Mr. Kumar's ice cream stand and Mr. Kumar. In the school, Yaya suspect that the fire accident was not because of the explosion of gas cylinders or electric current. This is evidenced from the absence of objects triggers fire in the warehouse. Then, BoBoiBoy plan to have patrolling to know the suspect. At the headquarters, Adu Du has made a fire detector. With Probe, they use it to find the perpetrators of the fires. That evening, BoBoiBoy dream about genesis fires all over the Rintis Island. When he sees a mysterious figure who burn such spots, he was awakened from his sleep.

The next morning, BoBoiBoy and his friend came to the location of the most recent fire in the warehouse field school. There, Ying found a trail of shoes that allegedly belong to the offender. Although traces of these shoes are used as evidence to match it to the entire primary school students, almost no trace of the same shoes. While matching shoes BoBoiBoy with Gopal, Papa Zola even damaging the evidence. Lucky the existence of surveillance cameras at sports barn help their investigation. After review, in addition to fire principals which are seen as fireballs, there was a shootout in the Probe and Adu Du surveillance cameras are. Probe and Adu Du was interogated by team BoBoiBoy and ask several question to ensure that their perpetrators rather than fire. But, Adu Du has claimed that he returned the evil post incident BoBoiBoy punched to Adu Du's mother. He also claimed to have had a new member in his crime group.

Team BoBoiBoy finally shocked because the term Kokomander Koko which had called the Onion Monster in previous episodes is Adu Du was already know the perpetrator of the fire was due to the Adu Du to see the mysterious person. Then, he tell that when Adu Du and Probe went to elementary school, they see a mysterious figure who allegedly are the fires. Adu Du also pursue Probe and get to a place that resembles the got. When they sign in, Adu Du feel the heat and continue the journey. All of a sudden heard the voice and Adu Du kicks him.

When Adu Du met up with perpetrators of fires and invite to the group. Unfortunately, he did not agree. The perpetrators also exposes himself to Adu Du and Probe was stunned and shocked even drop out the flashlights because the offender is actually BoBoiBoy which was then turned into BoBoiBoy Fire. Then, BoBoiBoy Fire attack Adu Du and Probe with Fire Ball. When BoBoiBoy heard that story. BoBoiBoy not believe that nightmares about fires and on the episode ago (Episode 7 and Episode 12) is reality and the culprit is his own. Adu Du was told BoBoiBoy that wait and see themselves as night falls leaving the confused BoBoiBoy. 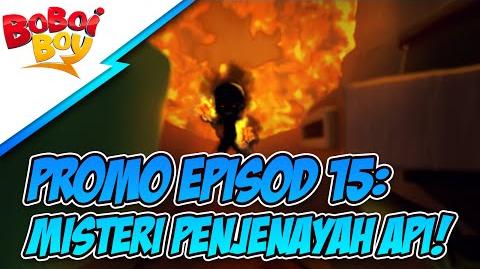 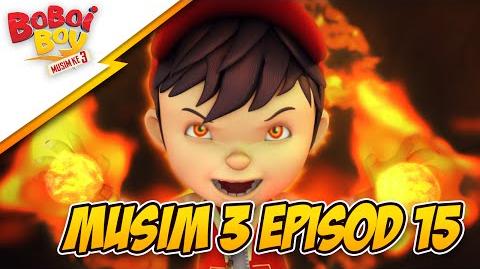