Boboiboy Wiki
Register
Don't have an account?
Sign In
Advertisement
in: Groups, BoBoiBoy Galaxy, Tracker And Protector Of Power Spheras,
and 5 more
English

TAPOPS (Tracker and Protector of Power Spheras) is a group that is led and created by Koko Ci, dedicated to find and protect the power spheres that are scattered around the galaxy.

TAPOPS is an intergalatic organization led by Koko Ci to help the many power sphere that have been scattered across the galaxy safe saction in their care. One of the main reasons for doing so is preventing those power spheres (and ultimately their powers) from being misused by evil people or groups. It is unknown when TAPOPS was first formed.

They were formerly based in a space station, noticeably in the shape of the letter "T", posing as a laundromat. They use these laundromats to communicate with other members without suspicion. In addition to the main base, they are also many other members sanctioned in different parts of the galaxy with different missions.

After their main station was destroyed in the battle against Captain Vargoba in Episode 24 of BoBoiBoy Galaxy, they moved to the TEMPUR-A Headquarters to recover. TAPOPS Station was later rebuilt, though was destroyed again by Retak'ka in BoBoiBoy Movie 2.

Affiliations that the TAPOPS agency has with other people and groups.

TAPOPS currently houses many Power Spheres in their care. Most of the remain in an inactive state while being protected. Only Ochobot, Bellbot, and Motobot do additional work as members of TAPOPS. Following the TAPOPS Station destruction in Episode 24, they have all been transferred to TEMPUR-A Headquarters. The were presumably transferred to a safe location after the TAPOPS station was destroyed again in the BoBoiBoy Movie 2.

Some of TAPOPS members in the opening

TAPOPS Station in disguise as Laundromat 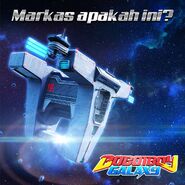 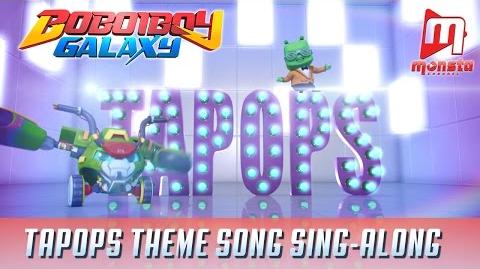