The episode begins with the execution of the mission planned in the previous episode. Adu Du's ship is critically damaged, and as it plummets to Earth, Adu Du launches a capsule containing BoBoiBoy and his friends at Kaizo’s ship. Meanwhile, Fang exits the cockpit using his Perforation Power and goes to take back the Watches. Kaizo notices, but doesn’t stop him.

Kaizo applauds BoBoiBoy's Gang for daring to face him without powers. BoBoiBoy demands to know where Fang is, but Kaizo instead challenges BoBoiBoy’s gang to fight him for the possession of their Watches. Though the odds are unfair, to everyone’s surprise, Kaizo reveals that Fang is hiding in the ceiling rafters with his friends’ Power Bands.

The fight starts suddenly when Lahap fires at BoBoiBoy’s gang. Fang jumps in and surrounds them with his Perforation Power so that the shot passes straight through them, but tears through the ship’s wall straight to the vacuum of space. Fang quickly throws the Watches to his friends before they’re sucked out of the ship.

Witnessing Fang’s treachery, Kaizo cracks Fang’s mask and glasses with his sword, but leaves Fang unharmed. Kaizo proceeds to use Force Field Drive to push everyone out of the ship onto his sheltered Battlefield Training Grounds, where he proclaims the real battle to begin.

Kaizo swings at Fang first, but BoBoiBoy transforms into Thunderstorm and races to block it. He claims that he’ll prove they’re worthy of wielding their powers. Kaizo effortlessly keeps up with Thunderstorm’s attacks, even remarking that while he admires BoBoiBoy’s spirit, he will lose on his own. Fang challenges that statement by fighting alongside Thunderstorm.

An explosion from Kaizo’s sword urges Yaya, Ying, and Gopal to help their friends, but they’re stopped by Lahap’s Toxic Plasma. Yaya and Ying try to attack him, but Lahap armours himself by eating pieces of spaceship’s steel. The girls’ attacks rebound off his steeled body, injuring their hands and feet.

BoBoiBoy and Fang, who were also thrown back, renew their attacks on Kaizo, with BoBoiBoy transforming into Cyclone. Kaizo evades their attacks, slices through Fang’s Shadow Tiger, and jumps high enough to able to halve Cyclone’s hoverboard. Fang‘s Shadow Polar Bear is then waved off by Kaizo’s Energy Fist. Cyclone and Fang are left sprawled on the ground when Kaizo sets up an Energy Wall that pushes them towards the grounds’ wall. They slow it with Cyclone Drill and Shadow Hands.

Meanwhile, Yaya throws pieces of the ship’s steel at Lahap with her Gravity Manipulation as Ying uses her power to accelerate them. Lahap prepares to eat them and grow stronger, just as Gopal turns them into vegetables. Lahap’s body softens to the vegetables texture, allowing Ying and Yaya’s attacks to be effective.

On the other scene, BoBoiBoy turns into Quake and summons an Earth Golem to hold the wall. Since even that isn’t strong enough, he manages to summon three Earth Golems at once, and their simultaneous punches successfully breaks the Energy Wall. The Golems attack Kaizo, but he manages to dodge and fend them off. When one Golem is almost destroyed, BoBoiBoy realizes he can't control all three on his own. He splits into Water, Fire and Earth again, with each Element infusing their powers into their own Golem and controlling it.

As the Fire and Water Golems attack Kaizo, he bursts into satisfied laughter, which hasn’t happened in a long time, according to Lahap. While Kaizo is able to dismiss them, a Shadow Golem controlled by Fang suddenly attacks and reveals it can dissipate then reform, catching Kaizo by surprise and rendering his attacks useless.

Fang and BoBoiBoy do a Combo attack and Kaizo struggles to sustain a shield against the three Golems. They break his shield, and the resulting explosion from the impact of their punches cracks Kaizo's mask and throws him against the ship's wall. This act confirms BoBoiBoy's gang's victory.

The moment is short-lived when Kaizo drops from the wall and somehow breaks the Golems with a snap of his fingers. BoBoiBoy and Fang prepare to fight despite their weakened states, but shockingly Kaizo praises BoBoiBoy for proving that they're worthy of their powers. Lahap protests, as their mission was to distribute powers to their allies, to which Kaizo responds by inviting BoBoiBoy to join his team.

Later, Kaizo returns BoBoiBoy's gang to Earth, and they contemplate what the captain just told them. Kaizo explained that BoBoiBoy's capability with his powers in combat is what his team needs to be able to carry out their mission of finding Power Spheres and keeping them from the wrong hands. However, BoBoiBoy refuses the invitation as he opposes Kaizo's belief that force is required to resolve such situations. Kaizo accepts their decision, but he warns BoBoiBoy to be wary of inevitable future threats, and to protect his friends and Power Sphere.

Tok Aba and Ochobot return from grocery shopping. BoBoiBoy's gang assure a concerned Ochobot that their mission was a success. Tok Aba asks where Fang is, as he is absent, and they recall the ultimatum Kaizo presented to him: rejoin his team and go home, or stay with his friends on Earth.

Fang suddenly appears behind Ochobot and assures him that he isn't leaving since his older brother, Kaizo, is strong enough without him. At that revelation, Yaya, Ying, and Gopal are furious that Fang didn’t tell them, and that he let his brother beat them up instead of talking things out with him. They chase him down, and eventually beat him up in retaliation.

Looking to the night sky with Ochobot, BoBoiBoy narrates how he must stay vigilant against others who are out to get them. He says he must protect his friends, the Earth, and the galaxy, as the episode ends. 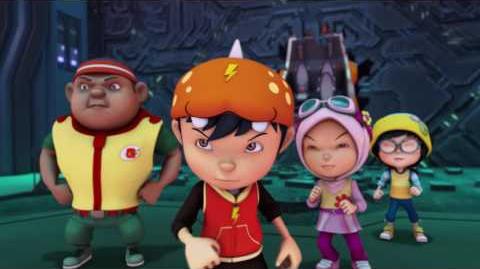 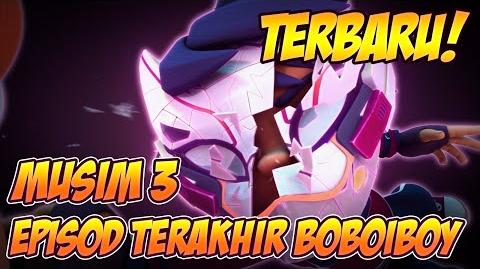