The Rampage of Cocoa Jumbo

The Rampage of Cocoa Jumbo (Amukan Koko Jumbo) is the 5th episode of Season 3.

Probe is finally alive once again and BoBoiBoy and Gopal were affected including the Goat S8000 and Computer. Adu Du came to him and Probe regains his memory and asked about news from him. But, suddenly, the machine turned down and Probe redied. BoBoiBoy and Gopal advised him to try again, but Adu Du said that the machine can have one chance means that it was truly not 100% success. Adu Du gave up, but BoBoiBoy and Gopal try to write 2 ream of paper. He also said that he must move on from him. They praised to the action. Suddenly, Ochobot called BoBoiBoy via his band to watch news from TV33. In the news, Ravi J. Jambul, the reporter, reported that there is chaos in the big city because the Giant Cocoa attacks the cities. The cocoa also carries the reporter, he interviewed him and said that it was because of Adu Du.

The BuBaDiBaKo team arrived and the Giant Cocoa directly attacked him. Adu Du tried to talk to him peacefully, but it was ignored. He tells that after Adu Du scolds him in previous episode, the cocoa walked alone in Cowboy Pete Monday's Alley along with Sasha and Potato sound. And he was determined to get revenge and eat many cocoas and become gigantic and made many chaos in the cities. Adu Du tried to apologize to him, but its too late. BoBoiBoy and Gopal tried to join the situation, but it not made drown out the atmosphere. He made an agreement to find them, if the Cocoa wins Adu Du will be eaten, but if he lost, he will leave the city and won't come back again. The pact start and the Cocoa Giant tried to search BoBoiBoy and Gopal. BoBoiBoy tried to use his Earth power, but failed and Gopal measured it around 1/2 m. The Cocoa Giant throws a big rock to the chocolate factory and measured in 1 km. BoBoiBoy give him a feather, made him angry and throw the feather away and measured in -0.5 m. The Giant Cocoa was defeated, but doesn't accept it and throws 2 big rocks, but changed fast by Gopal to the cotton candy. BoBoiBoy split himself and attacked the Giant Cocoa, but not give any effect.

They create a Thunderstorm Rain and trapped him using Earth Pilar Grab, and surrounded him by hurricane noiser, but the Giant reflected back the lightning, made them shocked and attacked the chocolate factory. Inside there, new employees tried to apply for jobs. The manager liked him, but all the employees were running outside having seen the Giant Cocoa. Gopal and Adu Du got a strategy to get his attention by being disguised as a tourism. Adu Du took many photos with him and spoke English. Then, for the last photo, the tourism announce to move him to the edge of a cliff. Finally, he fell into the sea. They celebrate the victory, but the Giant Cocoa climbed the cliff and jumped to the land. Then, Adu Du was doing a hula dance and made him shocked. BoBoiBoy Quake defended them, but was thrown away.

BoBoiBoy Quake and BoBoiBoy Thunderstorm attacked them, but failed. He ate the chocolate sign and thought it is real, and it doesn't. The Giant Cocoa drinks the liquid chocolate and becomes stronger and bigger. They tried to attack him, but failed. He took the electric pole and successfully hit BoBoiBoy Thunderstorm, Cyclone, and Quake. Because failed to grab the giant cocoa, and saw all of his friends. He tried to smash Adu Du, but Super Probe came to shield him. He also unleashed a group of missiles to transform him back to Cocoa Jumbo. He lost his memory and tried to shoot BoBoiBoy and Gopal, Adu Du then threw his mug to regain his memory. Finally, his memory is revived and they reunited. 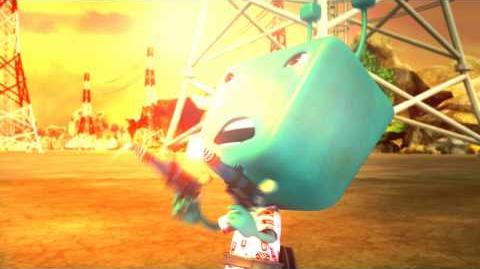 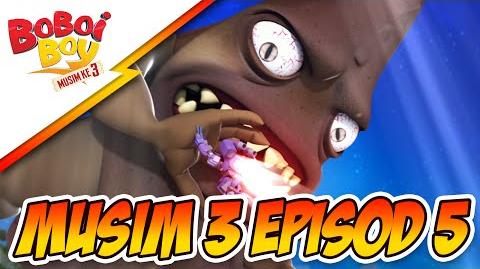