The Rampage Of Cocoa Jumbo

Operation Cocoa Cooperation (Kerjasama BuBaDiBaKo) is the 4th episode of Season 3 of BoBoiBoy and the 30th episode overall in the series.

BoBoiBoy and Tok Aba must teach Adu Du how to become a good and a useful alien so that he can redeem himself.

Adu Du introduces Cocoa Jumbo that actually is very small and also made Ochobot, Tok Aba, and BoBoiBoy want to touch it even Ochobot offered him some nuts and Tok Aba offered a raw fish. While they tease the Cocoa Jumbo, Gopal was still scared of the monster and climbed a lamp pole. While Adu Du insulted him, Tok Aba suggested for him to use kind words and be polite when asking for something. First, Adu Du tried using a bucket of flowers and a red tie, but it wasn't working. Ochobot explained that he can't because he will never learn how to speak using good words. BoBoiBoy, Gopal, and Tok Aba helped him to learn that, until night, at 11.00 PM they are sleepy, but Tok Aba said the cocoa is not available again and he's very angry and started to throwing temper tantrum (which proves that he's childish) until he stops. Adu Du said he needs 5 barrels of cocoa to give to Bago Go and buy the converter to make Probe alive again and made Tok Aba faint. It was expensive, but BoBoiBoy have an idea to get the cocoa as he need. However, Adu Du must join the mathematics class first, and he agreed.

At school, Adu Du was welcomed by Papa Zola, but he's angry because Adu Du got 20% and Adu Du got angry, but calmed by BoBoiBoy and Gopal and ordered him to take a deep breath. Papa Zola commanded him to answer the math question and Adu Du writed many equations in all parts of class including on Papa Zola's face. After school, they made a mission, that is called "BuBaDiBaKo" (Buat Baik Di-Balas Koko). Fang suddenly disturbed them by saying " kukatabako". Then, Adu Du explained the plan: allow help and donate if you want, find people that need help, help them with full of sincerity, and give to the charity if they want. Fang heard the explanation, and wanted to join the team, but BoBoiBoy doesn't allow him because many fads that he did to him such as command BoBoiBoy to pay for the Red Carrot Donut he bought in the canteen, cheat him about the teacher appearance to make him wake up, and accuse him giving a vase and basket of rose to Papa Zola. Fang was angry and said he'll disturb them in the mission.

Team BuBaDiBaKo did their mission; they helped the Canteen Lady to catch the chicken and put him in the chicken coop. Adu Du tried to use the reception, but the chicken attacked him and almost make him shoot the chicken, but Gopal told him to not shoot the math teacher when there is a test and the chicken. But, suddenly Fang attacked them using Shadow Eagle. Adu Du wanted to attack him, but turn to good because of of Gopal and BoBoiBoy. The chicken and the canteen lady were inside the coop and the lady gave Adu Du RM10. The BuBaDiBaKo song was played and show these scenes:

Fang cheated Adu Du by saying that someone needed help in Cowboy Pete Monday's Alley. Then, he helped an old man to grab the coconut from the palm tree, cleaning Yaya's house (although was chased by Sasha), and painting Mr. Kumar's ice cream bike (there was brush throwing).

The mission ended after a week and three days. After the mission is done, Adu Du successfully got 5 barrels of cocoa, he gave it to Bago Go and bought the converter.

In Cube Fortress, Adu Du commanded Bago Go to use the cocoa in good way, but arrogantly he wanted to use cocoa to become a rich alien. Adu Du tells the Computer and Goat S8000 that he was reformed to good now. Then, he turned on the converter. It's working and the energy power is enough to make Probe alive again. 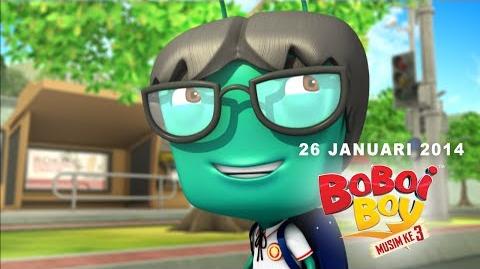