This is the 9th episode of Season 2 of BoBoiBoy and the 22nd episode overall in the series.

In this episode, BoBoiBoy and his friends defeated the Recycled Tiger and returned to normal. Meanwhile, Adu Du and Probe made a TV show to sabotage BoBoiBoy.

Adu Du's Recycled Tiger robot attacked BoBoiBoy and his friends for the first time. Fang used his Shadow Tiger to attack the Recycled Tiger, but it came out so tiny that it was deemed useless. Ochobot told Gopal to use his power, but he wanted to defeat it with his bare hands. Fang just let him do it while BoBoiBoy is digging a grave for them. When Gopal tried to use his powers to defeat the Recycled Tiger, it did not work. Ochobot found out that his powers could only worked when he's scared. Ochobot told BoBoiBoy to split into three, and he did. However, their overly pessimistic views only resulted them to continue digging the grave. Seeing Gopal needed help, Ochobot told Yaya to distract the duo by spinning their elevator, while Ying took the Emotional Antidote that would save the gang. She gave it to Gopal and he drank it. When the Recycled Tiger tried to attack Gopal, now returned to normal, Gopal got so scared that he successfully turned the Recycled Tiger into food. Adu Du, realizing his plan failed, told Computer to do something. However, the three elemental BoBoiBoys work together to stop Adu Du and Probe by having another combo movement.

After gaining victory in the underground, they went back to Tok Aba's shop. Ochobot told him that Fang is a good guy after all. Feeling ashamed for jumping into conclusion, BoBoiBoy apologized to Fang, but Fang refused to accept it. Gopal, Yaya and Ying convinced him to forgive them. He then stated that he will forgive them if they believe that he is more popular than BoBoiBoy. Ying and Gopal accept it, but BoBoiBoy didn't agree.

In Cube Fortress, Adu Du and Probe want to make a show that sabotage BoBoiBoy. It changed Papa Zola's show. Before the show, Adu Du (as Director, Producer and Writer) counts down from three to one and then he said "Action!".

The show started and it was called MKHIPI with Probe as the host. It tell that Adu Du was hurt by BoBoiBoy. Probe open phone service 1-200-300-400. The one that call is Tok Aba that revolt about his grandson that become the main topic.

When the show was on commercial break,  Bago Go promote his first action figure. It say that his son, was big like a Stegasaurous dinosaur before, but now his son is skinny like stick. He also say that it available in form of BoBoiBoy Earth, BoBoiBoy Wind, Ying, Yaya, and Gopal. Adu Du was very shock because it must be sabotage him, not promote it.

The show continue with the guest star, Papa Zola. Probe promise to pay him. He say that BoBoiBoy was misuse his power. Then, Probe shows a video that actually was wrong. BoBoiBoy use his power to help Tok Aba to build his shop. Then, he read a book, but Adu Du pulls a lever that drop Papa Zola down. After the shows is done, the credits roll with Adu Du, his robot slaves as his cameramen, Probe, and Computer (as Executive Producer and Editor). They see that it is watched by 90% people. However, that only represented 4 and a half out of five viewers. This was because they aired it in 4.30 am, where almost all the people were asleep. Though, Adu Du was satisfied with the results.

Computer (when she's repaired back to normal) said that the people that watched were Tok Aba, ToToiToy, Mr. Kumar (while he's sleeping), Ying's Grandma, and Sasha (the half viewer). Then, the signal was off. 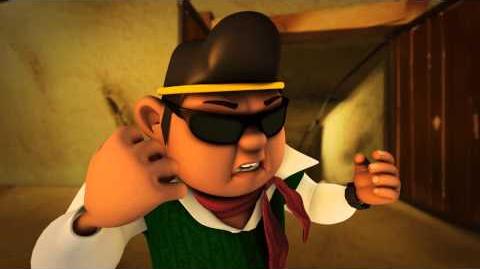 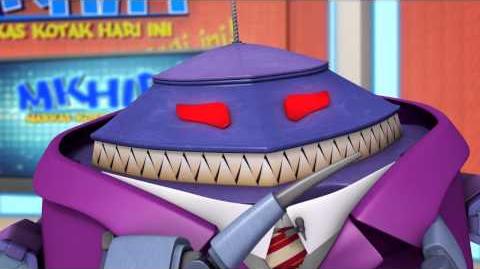