This is the 8th episode of Season 2 of BoBoiBoy and the 21st episode overall in the series.

In this episode, Fang remembers his past with Ochobot.

Adu Du expected that BoBoiBoy and his friend will come to his place. So, they will launch the second phase of his plan. Then, they have arrived at the entrance of Adu Du's Hiding Box. Gopal asked them to enter, but BoBoiBoy wanted to go home. Gopal asked BoBoiBoy if he believe Gopal, but he answered no. Gopal said he must change his persuasion way.

Finally, Gopal tied BoBoiBoy with him. Then, Gopal asked them to enter that place.Then, Gopal entered with BoBoiBoy. Fang also entered that place. Yaya persuaded Ying to enter, then they entered together. When Fang arrived inside, he accidentally struck with the wall. BoBoiBoy and Gopal arrived safely.Yaya arrived safely too, but Ying fell on that place.

After that, Fang had remembered what had happened with him between Adu Du and Probe.

Before BoBoiBoy came to Rintis Island, Fang wondered how BoBoiBoy can be popular in his school.

Suddenly, Adu Du came to him but with the strange clothes so that Fang didn't recognize him. Probe was also with Adu Du. He asked Fang if he wanted to be popular. Fang said of course. Adu Du said again that he will give what BoBoiBoy have and what Fang didn't have. Fang asked what is that.

Adu Du said that was Ochobot. Then, Fang understood. Adu Du gave Fang 3 easy steps in a paper. Suddenly, Adu Du and Probe disappeared. They have gone on the tree behind Fang. But, Fang saw them.

Back to present stories, BoBoiBoy asked them where were they.

Adu Du was happy when they had arrived at the entrance of Adu Du's Hiding Box. Adu Du asked Probe to turn on the lights. After the lights turned on, he said 1001 Traps Room. Probe admonished Adu Du that the traps were not 1001. Adu Du said that was the name only.

Then, many traps such as axe, knife etc appeared. Gopal wondered how they could pass the traps. Suddenly, Yaya happily passed the traps safely. Then, after she opened the door, the trap stopped. Adu Du asked Probe why the traps stopped when the door was opened. Probe answered he wanted to gave the chance because the next trap would be more dangerous.

After they passed the traps, they went to the next trap. Suddenly, many doors came and closed their path. Ying asked who closed the door. She thought that either BoBoiBoy and Fang closed the door. Then Fang said that his heart door will always be open. Then, he saw his past 'Adu Du's instruction letter'. That made Fang remembered his past.

He read that letter and followed the instruction on that letter. First instruction, he went to Tok Aba and BoBoiBoy's Cocoa Shop and bought Tok Aba's Ice Chocolate. Second, he said to Ochobot that BoBoiBoy had left an item for Ochobot asked what was that. Fang answered that he is not sure and said again that BoBoiBoy wanted Ochobot to take it as soon as possible.

Back to present stories, Fang said that the letter was his memories with Ochobot. Gopal took it, signed it and threw it. Suddenly, a big stone was coming. Ying was so afraid, but Yaya was so happy. Gopal said that the stone wanted his signature. After that, the stone squashed them.

Adu Du was so happy because he thought that he had won and Probe congratulated him. Suddenly, Gopal signed at the stone. Fang said the stone was made by paper.

Adu Du was so angry. He asked Probe why he did the stone with the paper. He said 'recycle concept'. Adu Du asked Probe that he was not hopeful, which means Probe is now a member of Team BoBoiBoy and then to release a tiger robot. Then, they went to next traps. Then, Fang saw a liquid on the high place. Adu Du appeared and said the liquid will recover them from crazy emotion. Then, Fang remembered again.

Then, Ochobot follow Fang to Adu Du's Hiding Box. He asked Fang where was that thing. Suddenly, Adu Du and Probe appeared and caught Ochobot. Fang asked who was he. Probe introduced Adu Du to Fang. Then, Adu Du asked Fang to enter.

Back to present stories, he said that Adu Du exploited him to catch Ochobot. Adu Du admonished Fang to not jack up the old stories. Ochobot surprised and open the handkerchief on his eyes.

Adu Du force Ochobot to give him a power, but he didn't want. Fang wondered what Adu Du meant. Ochobot told Fang that Adu Du was evil. Then, Adu Du asked Fang to give Tok Aba's cocoa.

Adu Du said if he wanted to be popular, he must give the cocoa. Ochobot said 'Don't!'. After thinking, he gave Tok Aba's cocoa to Adu Du. Then, Probe inserted cocoa in Ochobot.

Suddenly, an explosion occured. After that, Ochobot run from there. Adu Du and Probe chased Ochobot. Fang surprised and chased Ochobot too. Then, Ochobot run and hide in a trash bin at an alley. But Fang saw him and catch him. Ochobot shouted for help. But, Fang asked Ochobot to silent or he will be catched by Adu Du. Then, He and Ochobot hide in a wreck of metal.

In the present stories, Ochobot said that Fang was kind. BoBoiBoy regretted because he have been thought th

thoughts to Fang. But, in this time, Fang still didn't remember how he got his power. Then, Fang remembered again. Fang is panic because there is a sound. But actually, it is a mouse. Adu Du and Probe found him and try to snatch Ochobot from his hand, but failed. Ochobot then give Fang a Force of Power Band, meaning that he got his power. Then Adu Du tell Probe to shot him, but he cast Shadow Dragon and it is flying attack the enemies and the town. Fang can't control himself and Ochobot use his power and he fainted with Fang that have a power of shadow.

Back to present stories. Fang hugged Ochobot because of the stories. BoBoiBoy wanted to teach Adu Du a lesson but he was blocked by the Recycled Tiger. 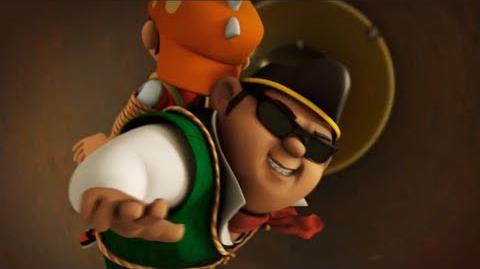 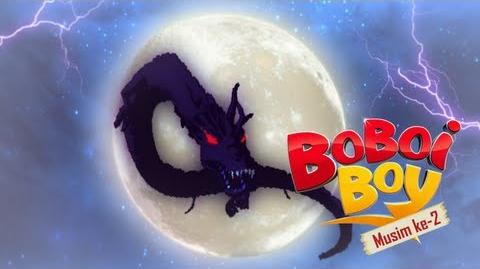 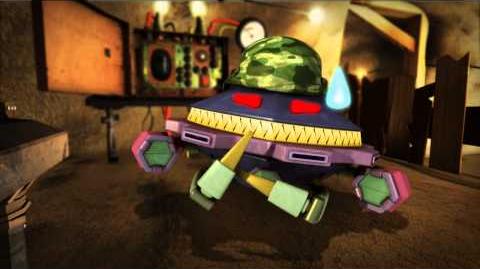