This is the 7th episode of Season 2 of BoBoiBoy and the 20th episode overall in the series.

Fang can’t remember why Ochobot faints every time he sees him, while Adu Du gets his revenge with the Y Emotion Pistol.

BoBoiBoy, Yaya, Ying, and Gopal including Tok Aba started listen to Fang explanation. But, Fang said that he didn't remember what had happened between him and Ochobot. That made BoBoiBoy and his friend disappointed. BoBoiBoy wondered how Fang can forget what had happened. Fang said again that he didn't remember how Fang can get his power. Gopal mocked Fang and that made him angry. Yaya told BoBoiBoy to bring Ochobot back home. Gopal told Fang to beat him if BoBoiBoy didn't block him. That made Fang so angry again, this time he'll be about to use the Shadow Eagle to eat him.

Later in Tok Aba's House, BoBoiBoy accompanying Ochobot in his room. Then, Ochobot dreamed that someone attacked him then made Ochobot woke up from his faint and hugged BoBoiBoy. Ochobot told BoBoiBoy about his dream and asked Ochobot to rest.

Actually, Adu Du didn't understand what was Probe saying. Probe said that recycle is taking a used thing and use it again. Finally, Adu Du understood him. Adu Du gave an example by throwing with the same mug many times but with a smile. Then, he asked Computer to send many mug to the factory and asked them to give back the money.

But, Adu Du wondered what was related between recycle and defeating BoBoiBoy. Probe said that they could recycle the old idea. Adu Du like the idea in Season 1, Episode 11. But, Adu Du asked Probe that the audience will bored if they used the same idea. Probe said that the audience will not realize that because Probe had changed to pink, but audience didn't realize it. So, they agreed to use the idea in that episode to defeat BoBoiBoy.

Ochobot had his dream again. This time, he dreamed that Fang attacked him and took him. That made Ochobot delirious. BoBoiBoy want to split into three, but failed and hitted the ceiling. This is the first time that BoBoiBoy failed to do one of his power.

Ochobot woke up and asked BoBoiBoy why he made noise in the morning, but BoBoiBoy said that Ochobot was noisy. Ochobot told BoBoiBoy about his dream. He asked BoBoiBoy whether Fang is evil or not. BoBoiBoy told Ochobot to not think bad of him. Next day in Rintis Island Primary School, BoBoiBoy told about Ochobot to his friends. BoBoiBoy, Ying, and Gopal started to think bad of Fang. Yaya advised them to not accuse without proof. Then, Fang entered the class. Gopal came to Fang and asked Fang if he have the debt. Fang answered that Gopal have some debt with him. Gopal said that he will pay it tomorrow.

BoBoiBoy came to Fang and accused him. He said that Fang took Ochobot and took his power. Fang said that he didn't remember. BoBoiBoy and Fang started to fight. Then, Yaya fined them. Behind Yaya, they fought. But, when Yaya looked at them, they pretended to be kind.

Suddenly, Adu Du called BoBoiBoy with speaker. That made Fang and BoBoiBoy fell. He warned that he will shoot BoBoiBoy's school. Stanley, Amar Deep, Iwan, and Gopal was happy because they will be in holiday if their school was destroyed. But Yaya was about to write their names and Adu Du will destroy them too. Then, Gopal told them to not do that. Then, Probe pushed Adu Du because he violated the rules by stepping on the grass. Adu Du shot the sign.

BoBoiBoy and his friends including Fang came to Adu Du. BoBoiBoy and Fang still fought. BoBoiBoy said Fang was evil, and Fang said BoBoiBoy was evil. Then, Adu Du interrupted them by saying that he was the only evil character in this series.

After a few minutes, Adu Du was missing from that place. BoBoiBoy and his friends wondered why the pistol didn't make any effect for them. Later in the Cube Fortress, Probe asked Adu Du why he didn't destroyed BoBoiBoy directly. Adu Du said that he deliberately did that. Then, Probe didn't believe that was his boss. So, he became a shaman to release the ghost from Adu Du's body. He was angry and said let them go.

After that, BoBoiBoy and his friends walked towards their homes. Gopal guessed that his pistol were broken. Fang said that Adu Du was afraid of him. BoBoiBoy and Ying were angry of Fang and said again that he is evil. Gopal asked Yaya to write Fang's name, but she disappeared of that place. They wondered where was she. Then, Yaya was seen laughing uncontrollably. Ying asked what was wrong with she, but suddenly Ying behaved like attacked by electric shock.

Adu Du said that was the effect of Y Emotion Pistol. Ying acted cowardly, Yaya laughed uncontrollably, Fang was unusually kind, BoBoiBoy was constantly in despair and Gopal acted stylishly. Adu Du said that they will lose of memory forever and ever. Probe asked Adu Du for celebrating their victory. Adu Du said again that was just the first phase. He will launch the second phase later.

In Tok Aba's shop, Ochobot came and offer Tok Aba for helping him. He asked how are him, Ochobot said that he was in good condition. Tok Aba said it was alright because he can ask BoBoiBoy for help. Then, BoBoiBoy came with despair emotion. Then, Fang came. Without wasting time, Tok Aba immediately close Ochobot's eyes with handkerchief. Ying, Yaya and Gopal came too. Tok Aba wondered why they behaved like that, and asked them for discussing. Because of the crazy emotion, the discussion can't be done. Tok Aba asked them to focus. 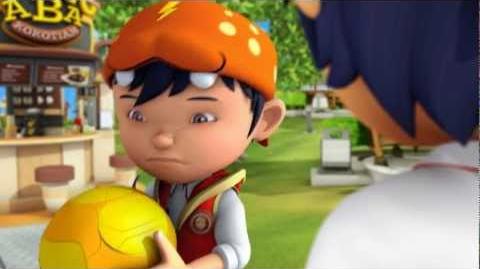 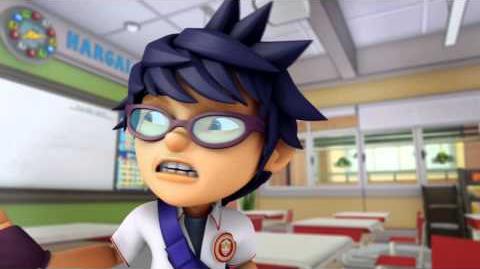