This is the 6th episode of Season 2 of BoBoiBoy and the 19th episode overall in the series.

BoBoiBoy, Fang and Gopal start feeling the effects of the Shrinking Pistol as their time runs out, while Probe and Adu Du celebrate their victory by changing the series's name to "Mister Boss and Probe".

After Probe recaps the previous episode, the episode begins directly where the last episode left off. Fang blames BoBoiBoy for getting him caught in the crossfire of his conflict with Adu Du, making him responsible for everything. Gopal silences Fang by asking him to help with silence, angering the boy.

BoBoiBoy says they should go to Tok Aba's cafe and ask for help from Ying and Yaya, whom he planned to meet there so they could all study together after school. Since their size would make the journey last for three days, BoBoiBoy constructs a map and plans to take the Cowboy Pete Monday's Alley shortcut. However, Gopal counters that Crazy Cat will block their path. Fang determines that if they're to pass through there safely they need to get something from the canteen.

At about 3:00 p.m., Yaya and Ying are doing their homework at the cafe when Ying comments on how late BoBoiBoy is. Yaya says she didn't expect him to be this late, and explains to Tok Aba and Ochobot that BoBoiBoy is cleaning the school for breaking a rule that Yaya had to punish him for. Instead of being mad, Tok Aba is ecstatic that BoBoiBoy is being taught a lesson for breaking school rules and promises to punish him some more when he gets back.

At the school canteen, Fang reveals his Shadow Eagle (to the other boys' astonishment) and tries to use it to fly them up to the counter. Unfortunately the three passengers are too heavy for the small eagle, so they climb the table legs instead. Once at the top, Fang finds what they're looking for: Yaya's Biscuits. Gopal tells BoBoiBoy about the time Yaya asked the Canteen Lady to let her sell her biscuits at the canteen. When the lady refused due to limited space on her counter, Yaya threatened to write her name down for allowing flies to gather around the food, at which point the lady cleared space and allowed her to sell 10 boxes of her biscuits on the counter. They grab a biscuit each and head towards the alley.

In the Boxy Bunker, Adu Du wonders where Probe has been gone for the past hours when the shrunken washing machine in his hands suddenly shrinks even further. He calls Computer over, who explains that since the shrinking formula is too strong, anything affected by it will continue shrinking until they disappear. These exact effects are felt by the boys as they walk through the alley, prompting them to hurry.

Adu Du contacts Probe, who is still looking for BoBoiBoy and fretting over his imminent demise if he returns home empty-handed. When he receives Adu Du's transmission, he begs his boss to give him another chance and asks if he has ever disappointed him. Adu Du responds with the time he traded their ship for the Electric Spatula, but quickly orders Probe to return to the Bunker as BoBoiBoy will shrink until he disappears.

As the boys run through the alley they are confronted by Crazy Cat. Fang handles the situation by creating a Shadow Rat to grab a biscuit in its mouth and allowing Crazy Cat to chase it. He dissipates the mouse just before the cat eats it so that the cat eats the biscuit instead, knocking it out. Here BoBoiBoy and Gopal realize that this is why Fang buys Yaya's Biscuits: to feed to the Crazy Cat so that he can use the shortcut to get to school early. However, Fang reveals that they're not safe yet because it takes three biscuits for it to faint completely.

Crazy Cat swiftly recovers and goes to attack Gopal, prompting BoBoiBoy to transform to BoBoiBoy Quake and form a barrier him. Quake asks Fang to help but Fang refuses to fight alongside him. Frustrated, Quake switches to Cyclone and hurls a biscuit at the cat, but Crazy cat dodges it, causing the biscuit to lodge itself in a far wall. Cyclone then converts to Thunderstorm and Lightning Speeds over to the biscuit to try and dislodge it. Fang scoffs at BoBoiBoy's struggle, belatedly realising that the cat is right in front of him. He almost escapes using his Shadow Eagle again until the cat jumps high enough to grab the eagle and dissipate it. The impact sends Fang plummeting to the ground before he is saved by Cyclone's hoverboard.

Cyclone hurls the biscuit at the cat again while Quake grips its legs with Earth Pillars to stop it from escaping. The cat opens its mouth in surprise and eats the biscuit, falling into another stupor, but recovering even faster than before. BoBoiBoy calls for another biscuit from Gopal before the cat breaks free from his grip. Gopal is about to throw the last biscuit when he and the other boys shrink again, allowing the cat to escape from Quake’s weakened hold and attack them.

Before we can see what happens, the scene abruptly transitions to the Boxy Bunker where Probe enters and, in an instance of fourth-wall breaking, tells Adu Du his "excellent idea": they should change the title of the series to "Mister Boss & Probe" since BoBoiBoy is no longer there. Adu Du wholeheartedly agrees so Probe hands him the lyrics to the new theme song, “Mister Boss and Probe”, and inserts a CD into Computer so they can sing it.

After the song, Adu Du praises Probe's idea when someone knocks on their door. Probe wonders if it’s some girl scouts selling cookies before it’s revealed to be Ying and Yaya, the latter with a basket. Adu Du demands to know how they knew about the Boxy Bunker, so Yaya holds out her basket, which holds the tiny boys, Fang being the one who told them the bunker's location.

The rest of the alleyway battle plays out via flashback. Right before the Crazy Cat attacks BoBoiBoy and Gopal, Fang holds it back using his Shadow Hands. They try to feed it the last biscuit, but it refuses to open its mouth. Looking around the alley, Gopal has the idea to transform the leaves into dried fish, which successfully makes the cat open its mouth in glee and Quake seizes the opportunity to feed it the biscuit. Upon eating it, the cat hallucinates the boys as dried fish and thrashes wildly against the binds to get to them. Crazy Cat breaks free and lunges at them, forcing Quake to convert to Thunderstorm and form a Thunderstorm Barrier around himself that severely electrocutes the cat. The shock combined with the effects of the biscuits shocks the cat into becoming normal and docile enough to let the boys ride on its back and take them to Tok Aba's cafe where they can meet up with Yaya and Ying.

After the flashback, BoBoiBoy demands that Adu Du change them back to their normal size, but Adu Du refuses and fires his Shrinking Pistol at Yaya and Ying. In the nick of time, the girls pull out Yaya's mirror and reflect the ray back to Adu Du.

Much later, a shrinking Adu Du orders Probe to bring him the Magnifying formula. Probe appears onscreen, battered after the fight with BoBoiBoy's gang and confesses that they took the formula with them. Adu Du plans to make another batch of the formula, just as a shadow passes over him. It turns out to be the mother of the fly Probe swatted earlier that morning returning to punish Adu Du.

Back at Tok Aba's cafe, BoBoiBoy, Fang and Gopal are back to their normal sizes. Ochobot hears them thanking the girls and comes up to ask BoBoiBoy something, but upon seeing Fang he short-circuits and blacks out. BoBoiBoy catches him as he falls, and asks Fang why this always happens. The episode ends as he is about to give his hesitant reply.

Differences with the TV3 version

BoBoiBoy Wiki has a collection of images and media related to Season 2, Episode 6. 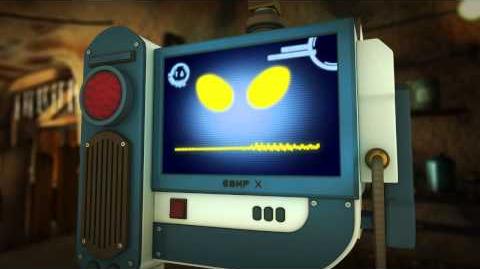