This is the 5th episode of Season 2 of BoBoiBoy and the 18th episode overall in the series.

BoBoiBoy and Gopal discover that somebody buys Yaya's Biscuits and investigate who it is. Adu Du schemes a plan that will "squash" his enemy.

After Probe recaps the previous episode, BoBoiBoy is seen running through a dimly lit street and hiding from sentient Yaya's Biscuits. The biscuits find him and multiply before jumping into BoBoiBoy's mouth as he begs them not to hurt him. However, the scene is revealed. To be a nightmare that BoBoiBoy is having due to Ochobot stuffing into the sleeping boy’s mouth.

BoBoiBoy wakes up and sees Ochobot with a packet of Yaya's Biscuits in his hand and realises that he was feeding him with them just to wake him up. He chases Ochobot around the room, the noise commotion calling Tok Aba up to explain that he asked Ochobot to wake him up so BoBoiBoy could help out at the cafe like he promised. Ochobot only resorted to Yaya's Biscuits after BoBoiBoy didn’t respond to burgers and old tires being stuffed into his mouth. This makes BoBoiBoy shocked and mad all over again, so Tok Aba leaves them to fight until they're ready to go to the cafe.

Later, Tok Aba takes BoBoiBoy and Ochobot on his bike to an empty site where the cafe is supposed to be, confusing BoBoiBoy. Tok Aba and Ochobot show him that the shop can now be compacted into a small capsule for easy transport, and can reassemble itself by pressing a button on a remote control. The upgrade was specially made by Ochobot, who jokes that the job helped tone his legs. Tok Aba and BoBoiBoy stare in shock at his non-existent legs.

Tok Aba gives BoBoiBoy a long list of errands he needs to run to get the shop ready before it opens at 6:30 a.m. He finishes his tasks at 6:25 a.m., thoroughly exhausted. Tok Aba explains to him aside that when BoBoiBoy wasn't there, he had to do all those things and more by himself, not wanting to burden Ochobot as the robot still faints sometimes. BoBoiBoy asks why those errands must be run so early, so Tok Aba explains that his number one customer arrives each day at 6:30, sharp.

As if on cue, Gopal appears and orders a Special Hot Chocolate. Tok Aba comments on his punctuality to show up and tardiness when it comes to paying his tab. BoBoiBoy asks Gopal why he goes there so early, to which he replies that the drink keeps him energetic while at school. BoBoiBoy asks to have an ice chocolate, but Tok Aba says that he can't have ice drinks in the morning, and tells them about one of his customers that ordered an ice chocolate every morning whom he had to take to the hospital the other day (albeit because he sprained his ankle in an unrelated incident). Instead, he gives both of them a Special Hot Chocolate.

As they drink, BoBoiBoy notices some packets of Yaya's Biscuits for sale on the counter and asks if anyone's buying them. Gopal claims that nobody would buy them even if they were free, which Tok Aba refutes as they're sold out almost everyday to one boy. Intrigued but disbelieving, BoBoiBoy and Gopal decide to wait at the shop to see who it is since he usually arrives around that time.

Meanwhile, Adu Du is enjoying a Nasi Lemak breakfast in his Boxy Bunker when a fly buzzes around him, to his great irritation. Probe tries to swat it with their Electric Spatula, but misses and breaks the table instead. The fly then lands on Adu Du's face and Probe manages to hit both the fly and his face. Probe celebrates his "bulls-eye" while Adu Du harshly berates him for almost hitting his own eye. He starts whacking Probe with the spatula, saying that he's as annoying as a fly. However, the thought and the sight of the unconscious fly gives him an idea that will "squash" BoBoiBoy.

Back at the shop, BoBoiBoy and Gopal have been waiting for the boy for over an hour. Ochobot warns them to leave for school now or they'll be late, but Gopal says that waiting for the one who buys Yaya's Biscuits is more important, exaspertaing BoBoiBoy, Ochobot and Tok Aba. While they wait for five more minutes, Gopal asks BoBoiBoy if Ochobot knows how Fang got his powers. BoBoiBoy says that Ochobot didn't know, and fainted when he showed him Fang's picture. Curious, Gopal shows some of his own pictures of Fang to Ochobot and asks if he's seen him before, causing Ochobot to short-circuit and faint, confirming BoBoiBoy's story.

BoBoiBoy wonders how Gopal has so many pictures of Fang. He explains that the demand for Fang's photo from his many fans has increased in the last six months, thus why he covertly takes Fang's picture at random times and sells them to the fans at $2.00 each, claiming to get good money from it. Tok Aba asks why he procrastinates on paying his tab if he's so rich, but suddenly points out the buyer of Yaya's Biscuits, who turns out to be Fang.

Ochobot wakes up, sees him and faints again. BoBoiBoy angrily asks Fang why Ochobot faints when he sees him, but Fang ignores him and pays for a packet of Yaya's Biscuits before heading off to school. BoBoiBoy requests that Tok Aba not be so nice to him as he's their enemy, but Tok Aba doesn't care because "Business is business" no matter who the buyer is. BoBoiBoy and Gopal follow Fang to find out why he makes Ochobot faint and why he buys Yaya's Biscuits.

They follow Fang until he spots them and runs into Cowboy Pete Monday's Alley. Gopal explains that the alley is the fastest way to school, but ever since Cowboy Pete Monday moved there, his crazy alley cat would chase anyone who trespassed there, making the shortcut too dangerous to use. Believing they can outrun the cat, BoBoiBoy enters the alley and he and Gopal confront Fang about Ochobot and the biscuits. Fang accidentally drops the biscuits in the process and immediately freaks out about it, just as the Crazy Cat appears. The three of them try to flee, but the cat dodges all the obstacles Gopal creates, catching up to them and viciously attacks them.

An hour later, the boys make it to the school entrance, badly scratched and with only 30 seconds until they're late. Before they can enter, Gopal stops them when he sees Yaya is monitoring the entrance because to her, "On time means late." BoBoiBoy thinks that she will forgive them for being late until Gopal points out the border separating the school grounds from the public grounds. Outside school Yaya is kind and sweet, but when she crosses that line, she becomes fierce and ruthless towards any rule-breakers. Fang tries to plot for BoBoiBoy to break some rules until he gets expelled so that Fang will be the most popular student, but his plan isn't taken seriously. Gopal then remembers another way into school through a gate near the teacher's lounge, so they enter through there.

As they walk to class, something shiny down another corridor catches BoBoiBoy's attention. They investigate, and discover an entire gold-plated wall listing all of Yaya's achievements and positions as president of all the school's clubs. BoBoiBoy is in awe of her achievements while Gopal believes that Yaya doesn't give anyone else a chance to be on the wall of fame. The three of them agree to work together to "beat Yaya" so they can get on the wall in the future. Unfortunately, Yaya reveals herself to have been listening in and asks who they said they will beat, brandishing her pen and notebook. BoBoiBoy tries to cover it up by saying they will beat Fang in the context of "beating him up" because they are enemies. Yaya believes them but writes their names down anyway since they are in a corridor prohibited to student entry.

At 3:00 pm, the boys have been forced to stay after school and pick up litter around the school as punishment. Probe suddenly shows up and swats them with the Electric Spatula before shooting them with a Shrinking Pistol.

Probe returns to the Boxy Bunker and informs Adu Du that he shot BoBoiBoy with the Shrink Ray. Adu Du is ecstatic until Probe admits that he mistakenly shot them before he swatted them. He orders Probe to go back and swat BoBoiBoy, threatening to shrink the robot if he returns before the job is done. The episode ends back at the school, where BoBoiBoy, Gopal and Fang fret over being shrunk.

BoBoiBoy Wiki has a collection of images and media related to Season 2, Episode 5. 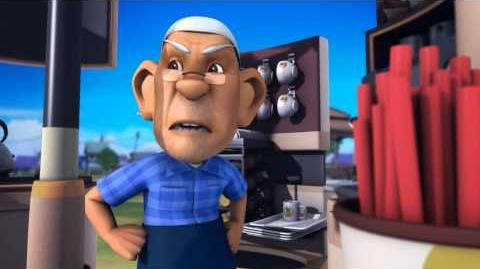