This is the 4th episode of Season 2 of BoBoiBoy and the 17th episode overall in the series.

In this episode, Team BoBoiBoy and Team Fang compete in their football match.

The episode starts with Probe recapping the events of the previous episode.

In Rintis Island Primary School, BoBoiBoy finalises Gopal, Yaya and Ying‘s positions on his football team. However, they still need one more member and the rest of their classmates only want to watch the match. As soon as they say that Iwan timidly volunteers himself. They accept him and the team leaves to train.

In the Boxy Bunker, Probe relays his idea to Adu Du on how to ensure BoBoiBoy loses the game. The audience doesn’t hear what he says, but Adu Du seems to like it and decides to execute it.

Later, Team BoBoiBoy arrives at the school field in custom team uniform with Class 5 Honest as an audience. Fang shows up alone before revealing the rest of his team to be Adu Du, Probe and two Robolabots, gigantic robots specially designed to play the football match. Everyone is shocked as to how Fang could team up with the villains.

Probe explains via flashback that Fang was in despair over being unable to understand football and having no friends to join his team. Adu Du and Probe heard him and offered to be his friends as he doesn’t know how to play football. Fang denied this and showed off his impressive basketball skills, mistaking it for football. After that “depressing” incident, they agreed to team up and help each other out.

Papa Zola acts as the referee, claiming again that this was his childhood ambition. Ying asks him to just let their team, the good guys, win against the evil opposition. Papa Zola refuses because as the referee he must remain impartial. Adu Du and Probe worry about how to execute their plan with a referee present. Before the game, Papa Zola lays out the three ground rules. No cheating, no using their powers, and no toying with the heart of a young man, the last of which is accidentally read from the wrong rule book.

The match begins. BoBoiBoy demonstrates his football prowess by outmanoeuvring the entire oppostion; Fang exploits his basketball skills as a goalie to successfully block his shot; Gopal blocks a kick from a Robolabot when Yaya and Iwan fail to stop it. The rest of the game’s first half is shown through a montage and ends with no goals scored. In the second half, Iwan takes the ball from Adu Du using his face and passes it to BoBoiBoy, who performs a banana-kick on it resulting in the first goal.

Adu Du fakes getting hurt in an attempt to garner a penalty for Team BoBoiBoy, but is tricked into dropping the act when the ball is placed between him and an empty goal. He scores the goal and receives a yellow card for faking.

Ying receives the ball, but the Blue Robolabot takes it, injuring her legs badly enough to take her out of the game. Since they don’t have any substitute players, BoBoiBoy calls Tok Aba to play. At first he’s reluctant to play because of his age but after BoBoiBoy persuades him, he proves to be very energetic, able to keep up with his grandson. Once they get closer to the goal, BoBoiBoy goes to perform Bicycle Kick but winds up short. Suddenly, Tok Aba jumps above him to perform his Old-Timer Bicycle Kick and manages to score a goal at the expense of twisting his hip. It’s only made worse when the boys dogpile him, and Ochobot arrives to wheel him away, leaving their team with only four players.

To execute their plan, Probe tells Yaya that the ball is flat. She picks it up to check, making Papa Zola chide her for touching the ball with her hands. Infuriated at being lied to, she uses her powers to kick the ball, aiming for Probe but knocking Papa Zola unconscious instead. Without a referee, Adu Du and Probe are able to cheat.

Adu Du places a red card in his hand to make it look like he is sending Yaya off the field, leaving Team BoBoiBoy with only three players. Then, he uses special shoes to kick the ball with enough force that the goal post collapses. When he kicks it again Gopal panics and transforms the ball into cotton candy. However, the cotton candy is blown by the wind into the goal, giving Team Fang one point.

After getting a new ball BoBoiBoy, is about to score with a Lightning Kick when the two Robolabots merge with Probe to form Robolabolabolabolabot Super King, who blocks the ball in time. RBBBBB Super King kicks the ball towards the goal with enough force that Gopal dives out of the way, evening the score to 2-all.

With only 30 seconds left, RBBBBB Super King tries to score, but Gopal stops it by transforming something into a large Yaya's Biscuit tough enough to withstand the force. He passes the ball to BoBoiBoy, who dodges RBBBBB Super King and splits himself into three. He uses all the elements, including Thunderstorm to try and score, but Fang counters with his Shadow Tiger, causing the ball to fly upwards. Given the little time left, Fang gloats about how he was finally able to beat BoBoiBoy, not paying attention as the ball falls back down and deflects off Iwan’s head and into the goal, bringing the final score to 3 - 2, to Team BoBoiBoy. Fang is absolutely devastated.

BoBoiBoy and Gopal dogpile Iwan and congratulate him for scoring that last goal. Adu Du tells Fang to prepare to fight, but he renounces himself from Adu Du’s team. Papa Zola finally wakes up at full-time and demands to know who destroyed the goals. Later, RBBBBB Super King, Adu Du and Fang are seen holding pails of water to clean the corridors with as punishment assigned by the Vice-Principal. RBBBBB Super King frets about the VP hearing Adu Du complaining, while Fang gives an exasperated sigh. 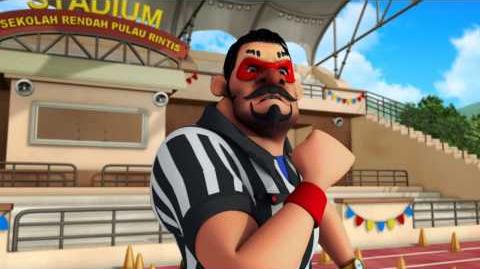