This is the 3rd episode of Season 2 of BoBoiBoy and the 16th episode overall in the series.

The episode opens in Outer Space where the Kubulus alien who purchased Adu Du's spaceship searches the ship's data archive and uncovers some classified. After deleting Probe's collection of episodes of "A Knapsack of Roses", he discovers classified files containing information about BoBoiBoy, Ochobot and cocoa on Earth.

Back at Rintis Island Primary School, BoBoiBoy finds out that he and Gopal are in the same class even though Gopal is a year older because Mr. Kumar forgot to bring the proper documents when enrolling Gopal, and he recalled his wrong birth year. As a result, he was put a grade below. Gopal also explains that Ying’s intelligence allowed her to move up a grade to their class despite being a year younger than everyone.

Fang then enters the room and he and BoBoiBoy exchange vicious glares until BoBoiBoy calls Fang a coward for running from yesterday’s fight. They prepare to start another fight, prompting Gopal to step in, if only because it was his day to tidy up the classroom and he would get blamed. Yaya overhears him and, as the Class Monitor, she threatens to write all of their names down in her notebook if they don’t stop fighting.

Gopal implores BoBoiBoy to do as she says, or the Vice-Principal will see his name in the Class Monitor’s notebook. To illustrate his point, the VP is said to have served in the military, become an eight-time kick-boxing champion after retiring, swam breaststroke five times across the Pacific Ocean and replaced the nerves in his body with steel. Now intrigued, BoBoiBoy asks for his name, startling his classmates as it’s said that the VP can be summoned by mentioning his name.

At that moment, Papa Zola enters and debunks everything said about the VP and tells them to open their mathematics textbooks. Yaya reminds Papa Zola that they are supposed to be doing physical education, so he leaves and reenters as a P.E. teacher, claiming that this was his ambition since childhood. Probe is also at the school, disguised as a janitor to spy on BoBoiBoy’s gang.

Class 5 Honest’s P.E. lesson involves a “dangerous” sport that turns out to be an egg-and-spoon race. BoBoiBoy and Fang refuse to play as the sport is for kids and too easy. Papa Zola takes that as a challenge and pits the two boys in their own race, in which the winner receives the legendary Papa Zola P Ruler. Gopal begs BoBoiBoy to race and win the ruler for him, while Fang only participates to stop them from getting it.

The race commences, with Amar Deep commentating. It isn’t long before both boys use their powers to gain an advantage. The finish is too close to call so they analyse the video Gopal took of the entire race. Based on the footage, Papa Zola declares himself the winner, despite the race supposedly being between the two boys only.

Fang, however, is not satisfied and asks to review the footage as he refuses to lose to BoBoiBoy, despite the latter letting it go and calling it a draw. Papa Zola asks Fang why he resents BoBoiBoy so much and Fang explains two reasons via flashbacks.

The first involves Fang running to canteen so that he could buy his favourite Red Carrot Doughnut. Unfortunately, BoBoiBoy bought the last piece before he reached the canteen, meaning that only the White Radish Doughtnuts were left. BoBoiBoy asks how he was supposed to know about that if he didn’t see Fang at the canteen at all, and Papa Zola wonders if this is the only reason Fang is mad at BoBoiBoy, which prompts the second flashback.

In this one, Fang arrived at school first and found the class in complete disarray, so he spent the entire morning cleaning and organising the classroom. Afterwards, Fang accidentally dropped the broom just as BoBoiBoy came in and picked it up for him. He was handing it to Fang when Papa Zola, seeing BoBoiBoy holding the broom, pushed Fang out of the way and gave BoBoiBoy all the credit for the cleaning. The students admired BoBoiBoy even more, deepening Fang’s hatred and jealousy towards him.

BoBoiBoy denies this to be his fault because they wouldn’t let him explain that he didn’t do it, but Fang is still determined to fight him even if it means getting punished by the teacher. Papa Zola suggests they settle it fairly, and BoBoiBoy suggests they do it via a football match. Fang appears nervous but is unable to back out lest he look scared. Papa Zola decrees that the match will be held this time next week, leaving them only that amount of time to form teams.

The disguised Probe, having seen and overheard everything, returns to the Boxy Bunker to tell Adu Du about the football match. Adu Du is clueless as to what football actually is and mistakes it for some kind of monster. Computer clarifies it as a human sport before Probe interrupts and explains it as everyone running after the ball so they can kick into their opponent’s goal, exaggerating the importance of celebrating the goal. Adu Du praises Probe for giving him the information and formulates a plan to take advantage of the game to defeat BoBoiBoy.

Like the previous episode, scenes were cut when it first aired on TV3. 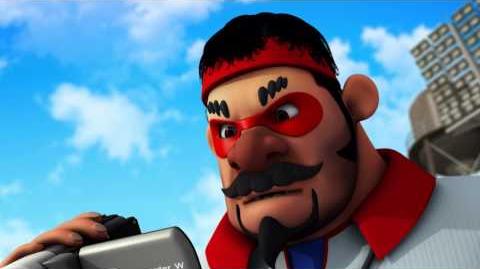