This is the 13th and final episode of Season 2 of BoBoiBoy and the 26th episode overall in the series.

It seems that Yaya, Ying, Gopal, Papa Zola and the entire fifth grade were kidnapped by Ejo Jo. thus, he removed 3 power bands from Yaya, Ying, and Gopal!

Could this be the end of Team BoBoiBoy and Rintis Island Primary School as we know it?

In Cube Fortress, Adu Du was reviving Mukalakus and suddenly, Probe shocked him and brought a cookies and tea to make him have his breakfast. Probe told him that there is a mouse but Adu Du found out that it was a computer mouse, he got mad and throw it using his mug but Probe disappeared. He was worried and suddenly woke up from the terrible nightmare, BoBoiBoy come to him and Ochobot said that he save him after fainted (from Ejo Jo's punch) and decided to hide in his quarter to provide Ejo Jo's visit. He was very thirsty and Tok Aba gave him some his cocoa drink to him. But, he revolt and said that it's not a hotel. BoBoiBoy told him that they will try to defeat Ejo Jo, Adu Du released his anger towards Ejo Jo after he destroyed Probe, Ochobot give him his damaged Probe and ask him if he can repair him, but he said that he can't just yet, he went out of his room with Goat S8000 leave BoBoiBoy and Fang that want to work together to defeat Ejo Jo. Ochobot decide to give up, but the boys punched him and he changed his mind and made a discussions.

In the spaceship, Ejo Jo was seen holding the Power Bands, Ying knew that he will do something to it. Papa Zola gave all the students his card and all were not afraid again. Yaya believes that BoBoiBoy and Fang will work together to save them all which made Papa Zola very proud, but Ejo Jo shock them using the red electricity while saying "Awesome".

Adu Du contacted Ejo Jo and told him that BoBoiBoy is in his headquarters, he walks towards the quarter and force BoBoiBoy to come out. But, he didn't. Then, he released PETAI and BoBoiBoy Quake make a big hole and it landed at the hole, then he close again and created a Giga but he only jumped at the hole, the robot took the advantage to rise again and attacked the Giga's arms with his laser. Quickly, BoBoiBoy Quake compressed his fists to form the arms again and attempted to smash PETAI but he was protected by his shield, BoBoiBoy Cyclone and BoBoiBoy Thunderstorm came and attack using Cyclone Drill and the Lightning Speed, the shield was starting to break but it healed after PETAI shot them using his Laser Beam. BoBoiBoy Thunderstorm threw his Thunder Blade and suddenly created Thunderstorm Rain.

BoBoiBoy Quake uses Earth Pilar Grab to attacked PETAI. Together, the 3 BoBoiBoys used the Combo Movement, BoBoiBoy Cyclone created a giant wind to carry himself and the others, while on their way, BoBoiBoy Thunderstorm and BoBoiBoy Cyclone created Mega Cyclone Drill and Mega Thunder Blade, PETAI's laser made the movement of BoBoiBoy to slow down but when the laser disappeared, they striked the shield. After the dust disappeared, his friends thought that they already win but the shield recovered soon.

When PETAI was about to shoot them, the clouds turned darker and Fang release a giant Shadow Dragon and try to eat the robot. The robot shot him many time, but it not affected. The dragon bite and destroyed the shield and PETAI was defeated leaved a source power that still active, Fang fainted and Ochobot saved him. Gopal and Papa Zola praised Fang about the Shadow Dragon, then Ejo Jo went out of his spaceship to defeat BoBoiBoy.

In the Cube Fortress, Adu Du remembered his moments with Probe when he was still alive, he opened the room and it was seen that Mukalakus was rebuilt. 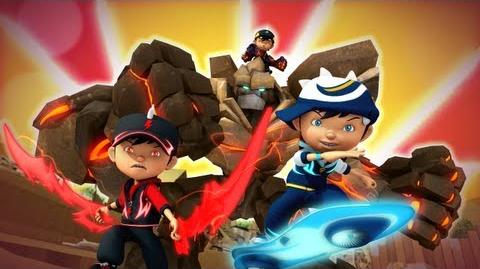 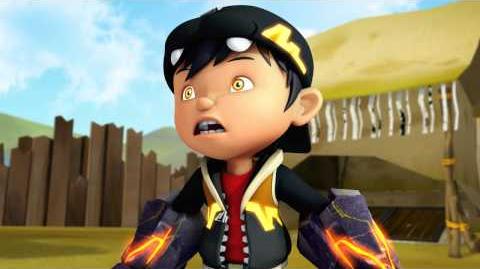