This is the 11th episode of Season 2 of BoBoiBoy and the 24th episode overall in the series.

Papa Zola gave the class a math exam, meanwhile, Adu Du and Probe planned to destroy BoBoiBoy so he fails the exam.

The story was started when Adu Du can't sleep because of worrying about Ejo Jo's arrival in Planet Earth. Suddenly Probe shocked him then Adu Du hit Probe with the mug. At the space, Ejo Jo's Spaceship was about to come to Earth.

In Rintis Island Primary School, Papa Zola gives a riddle what was a thing in his hand. But, nobody can answer it. They suggest that he give a clue. Then, he gives three clues. First, the thing is very creepy. Gopal said it as a ghost but he is wrong. Second, the thing was very be awaited. Gopal once again said it as a ghost guardian. And once again it was wrong. The third one, it can determine the future. Then, Gopal said it was mating ghost. Then, BoBoiBoy ask for a permission to toilet. Then, he greet Papa Zola and suddenly found that there is nothing in his hand. Then, he run out of the class. All of the classmate was angry. Ying revolt because he mocked the students. But, in the hand writing, there is a date which the Mathematics test will be held which is 25 February 2013. All of the student panic. Then, BoBoiBoy come to class and also panic when today was the Math test.

Probe heard it and report to Adu Du. He then have an idea. In canteen, Gopal panic because he not memorize the material. Suddenly, Fang pride himself to be a 3rd person who get a good score in 5 Honest class. But, Gopal notify that Yaya and Ying was the smartest in any kind of subject. They become a rival and want get a 1st ranking. The proof was when Yaya and Ying was study together and each other were cheating. But, the sirine mess all and all of them must be ready. In class, Papa Zola distribute the paper and Gopal was finished very well.

But, Papa Zola was query the answer. Then, Gopal do it again. In outside, Adu Du come to class and disguised as "Abdul Dudul" with Probe as her mother Mrs. Stephenson. BoBoiBoy was know it and yelled to him. But Probe escaped to toilet but when he approached the Ladie's bathroom, Fang, Yaya, and BoBoiBoy want to beat him, but Papa Zola hold them. He justified him as a new student. BoBoiBoy wants to betray him, but he said that he want to study and not good for prejudice. All the students were ready and suddenly, Yaya and Ying show their rivalry. In one problem, there is a bus driver that bring 41 passenger

in a morning rain. He stop in Station A and 5 passenger was drop and 7 passenger come in. It means that 41 - 5 + 7 = 43. After it travel around 15 minutes, the bus was stop in Station B and C. 11 passenger drop and 40 passenger was come in every halt. It was 43 - 11 - 11 + 40 + 40 = 101. The question was how old was the bus driver? It shocked him, Yaya, and Ying. When Yaya and Ying asked the question, it was secret. But, they were scrambled to give the answer. He said that his age was "Sweet 17!". Iwan fainted and all the student asked the same question. Yaya want to give a gift on her birthday. Ying want to gave him a teddy bear. Yaya want give a pink present. He said that pink is his favorite color. All student was confused, BoBoiBoy and Fang ask why he like pink and teddy bear. Papa Zola give a requirement that the teddy bear must drawn like a pirates and have a sharp teeth. Amar Deep askd if there is the teddy or not. Papa say it as Truth Teddy Bear.

Then, he said that he is 37 years, 8 months, and 18 days old. Suddenly, a giant fan flicked a strong wind until they can't write the answer. Fang request to stop it, but it can't stop it without truth. The fan came from Adu Du's command. He state that it will destroy their future and mess the test. BoBoiBoy know it, but Adu Du lied it. The weather was change to hot weather and burn the exam paper. And it was change to rain, snow, wind and durian rain. And finally, an earthquake occurred, Adu Du thought that Probe did it but later, it turned dark which scared Probe, means that Ejo Jo arrived on Earth.

BoBoiBoy Wiki has a collection of images and media related to Season 2, Episode 11. 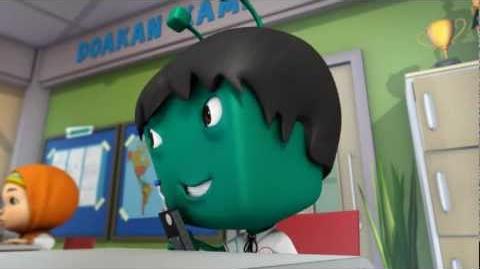 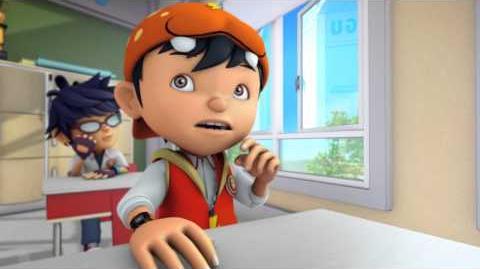 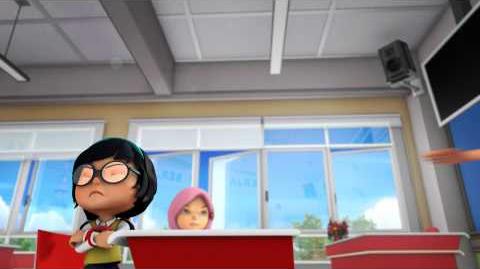