This is the 10th episode of Season 2 of BoBoiBoy and the 23rd episode overall in the series.

At this episode, Ejo Jo locates Adu Du on Planet Earth. Adu Du and Probe plan to postpone Ejo Jo's arrival on Earth by telling about BoBoiBoy and his friends's powers, but it failed.

Adu Du was sleeping but the alarm clock was ringing, he was very disturbed and try to hit it using his hammer, but the clock still ringing. He then shot it using his gun. At the space, Ejo Jo was sent big radio waves to Earth before he was landed. Probe screaming to make Adu Du wake up. He want to shot Probe but he say that it is already 1:00 o'clock P.M. He reported that there is prominent finding in their radar. Computer tell that the radar that released is similar like the previous ship. Adu Du throw his mug to Probe.

Then, the lamp in the underground suddenly flickered. Ejo Jo's computer said that Adu Du was the alien from Ado Doy's ethnic that was very low group in Ata Ta Tiga. Sector 42 is the worst sector that was discarded. Ejo Jo's Computer also show about Adu Du's Computer and Probe (which is now as Adu Du's assistant). Long time ago, the robot was made it as a combat robot. But when it is tested, one alien has slipped into power lines and causes damage to Probe when he upgrade to Super Probe.

Then, it say that Computer has components of XY2000, M8000, SIY234, and three unknown parts and also with coconut fibre. Back to Earth, Adu Du was very confused about the radar. Probe tell him about to get back their spaceship from Bago Go, but Bago Go say it is already sold. To substitute it, he recommended to buy the Lawn Mower S8000. It say that it use green technology and no need oil again and car free. It also comes with grass seed.

Then, Probe pawn Cube Fortress. But, before he was about saw Probe in half, Ejo Jo contact him for the prepare. He is actually his ex classmate that always bully him just like BoBoiBoy.

He was the cause Adu Du ran away from his home forever. Ejo Jo wants Adu Du to make his headquarters that was sold by Bago Go. Not only that, he also buy their spaceship. He also know about their activity during in the Earth and about Tok Aba's Cocoa and Ochobot. Then, Adu Du turn off the computer, but it is still on. Probe give a strategy to trick Ejo Jo. Adu Du try to turn off communication and Ejo Jo try to turn on communication (they do it many times until Ejo Jo gets angry), but Probe cover the computer with a dirty fabric. Then, he give instruction to Computer to scare Ejo Jo about BoBoiBoy. But, the edit is very freak because there is no original one. Then, he mention BoBoiBoy and his friends and their power. It also mention Fang and his power. Then, he ask computer to take his armor suit and his robot. Their panic, but there is a people that knock the door that actually is Probe. Then, Adu Du scolded him and was about to saw him in half. 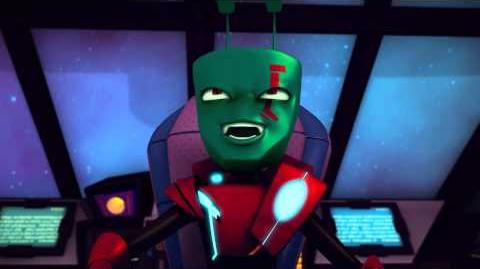 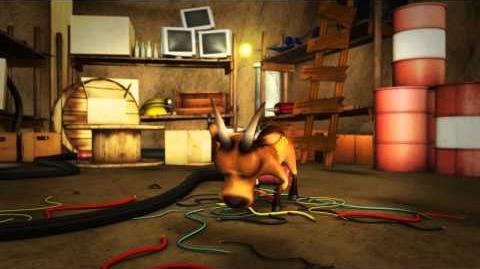