The Return of BoBoiBoy

This is the 1st episode of Season 2 of BoBoiBoy and the 14th episode overall in the series.

BoBoiBoy moves back to Rintis Island to reunite with Tok Aba, Ochobot, and his friends and to continue his studies at Rintis Island Primary School. He also hears stories from Gopal about a Haunted House and goes to investigate.

In Outer Space, a Kubulus alien is looking to buy Adu Du’s Spaceship from Bago Go, having searched for it for a long time. As usual, the scammer makes it seem better than it really is and offers the “antique” for a lucrative price, which the alien pays.

On Rintis Island, Ying and Yaya arrive at school and find Gopal doing his homework, albeit from two months ago, the reason being that he is still sad that BoBoiBoy’s gone. As they talk, “Mystery Boy” enters the classroom. Ying and Yaya attempt to greet him, but he coldly ignores them as he has apparently done during the six months he has attended Rintis Island Elementary. Despite this, he has many female admirers (including Gopal) who think he’s “cool”. Teacher Timi then arrives to introduce a new student to the class, who is revealed to be BoBoiBoy.

Through a series of flashbacks, BoBoiBoy arrived at the Rintis Railway Station at around 7:00 a.m., where he was greeted by Tok Aba and Ochobot. He moved to Rintis Island to continue his studies there and had to attend school upon arrival. Tok Aba gave him a school uniform, which belongs to his great-great-grandfather, confident that it was still in good condition. While adjusting the pant legs, he accidentally ripped them, so he folded up the ends, making them look shorter.

Despite the old uniform and short pants drawing mixed reactions from the students, BoBoiBoy is evidently already popular among them. Gopal teases BoBoiBoy about his uniform until Tok Aba tells him to stop. BoBoiBoy is surprised that Tok Aba is in class, just to keep him company on his first day of school, but Teacher Timi allows him to stay. BoBoiBoy’s defeated "Awesome," makes all the students laugh except “Mystery Boy”, who simply glares out the window.

After school, BoBoiBoy explains to his friends that his parents let him move to Rintis Island to keep Tok Aba company and help him out at the cafe. Tok Aba announces he is rebranding the shop to “Tok Aba and BoBoiBoy's Cocoa Shop” and has produced special BoBoiBoy-shaped biscuits for the occasion. He allows Yaya to sell her biscuits in the shop, much to Ying and Gopal’s doubt. To fix the rebranded sign for the shop, BoBoiBoy performs his Elemental Split, unaware that “Mystery Boy” is watching them from the bushes. Ochobot sees him and seems to recognise him before fainting, something which Tok Aba explains has been happening recently. Tok Aba tells BoBoiBoy to take the robot at home while they fix the sign.

Meanwhile, Probe is seen entering a cardboard box in the Junkyard. A hidden passage brings him to a large underground area that Adu Du dug out to serve as their new home. He finds his boss still digging more rooms and informs that they’re doomed because BoBoiBoy has returned. Rather than scare Adu Du, the news excites him as they finally have a chance to regain their honour by defeating their arch-nemesis.

The next day, BoBoiBoy arrives at school early (with new pants and a personalised uniform) to find Iwan and Gopal in the classroom. Gopal asks BoBoiBoy what road he uses to go home, which turns out to be the road where an old house can be seen. Shocked, Gopal closes the room off and explains to BoBoiBoy that he was walking past that house three months ago when shadow trails came up behind him and morphed into a black red-eyed “monster”. Terrified, he ran away and the monster followed, leading him to believe that the house was haunted.

He goes on to say that the ghost was as “huge” as a house cat but each time he passed the house, it grew to larger than any cat could be. BoBoiBoy dismisses it as a pregnant black cat with sore eyes, but asks about the alternate route anyway, which Gopal says takes five hours to get home. The bell then rings and everyone enters the classroom. Gopal dramatically tells BoBoiBoy to remember what he said.

Amar Deep warns that their Math teacher is coming, who turns out to be Papa Zola. BoBoiBoy is confused but Gopal tells him not to question it. Papa Zola gives them a “math” problem that doesn’t make any mathematical sense, causing BoBoiBoy to faint from exasperation. Papa Zola helps him up and explains that ever since he was young, his ambition was to be a math teacher.

After school, BoBoiBoy walks past the Haunted House despite Gopal's warning. Something inside the house growls and, dismissing Gopal’s previous nonsense, he decides to approach the house. As he passes through the gate, something with sharp teeth, whiskers and glowing red eyes dashes behind him into the bushes. He attacks it with a Lightning Kris but the creature is gone when he checks it out. The creature is revealed to have retreated into the house, and it dissipates into shadows as it runs towards “Mystery Boy,” who watches BoBoiBoy from inside the house. 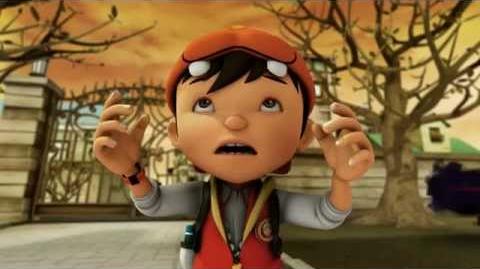 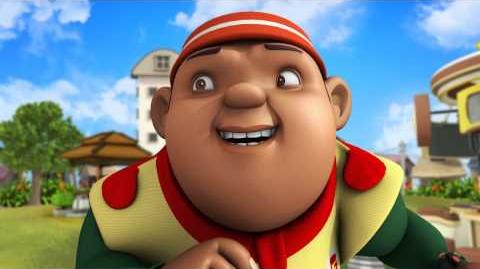 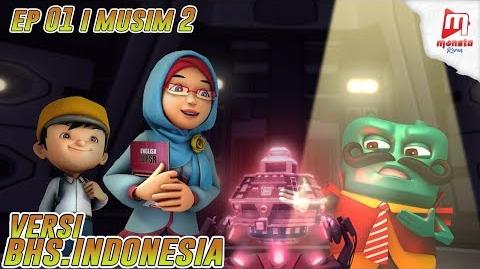