BoBoiBoy Thunderstorm is the 6th episode of season 1.

Adu Du tortured BoBoiBoy and increased his powers, soon he was forced to destroy his friends and get Tok Aba's Secret Recipe.

BoBoiBoy finally woke up and was surprised that he was trapped by Adu Du in his spaceship as he thought that he defeated him.

A bonus scene from the previous episode was seen that Adu Du and Probe used BoBoiBoy's Weakness to kidnap him, Adu Du kidnapped BoBoiBoy so his otherselves and him will not able to join together again and lose their memories.

Adu Du also stated that he got all the 4 things that he wanted:

Back at Tok Aba's Shop, Gopal, Yaya and Ying we're worried that Adu Du took the book but Tok Aba stated that the one that was stolen is the debt book, Ochobot came to the shop and told Tok Aba that Earth and Wind BoBoiBoys are fighting are forgotten themselves, Tok Aba stopped them by twisting there ears.

Because BoBoiBoy is not telling the secret recipe, Adu Du brought him to the Torture Chamber Room but we was suprised that Probe and Computer decorated it into a party room to celebrate their victory.

When Adu Du popped a balloon, he saw that BoBoiBoy was scared, because of this, Adu Du, Probe and Computer popped all the balloons in the room to scare him.

BoBoiBoy Lightning transformed to BoBoiBoy Thunderstorm and mistaken Adu Du as his enemies but Probe said that they are his friends and made a birthday party for him.

In Tok Aba's House, it was seen that Earth and Wind BoBoiBoys still don't remember theirselves, suddenly Gopal slapped their heads with a cooking pan which disappoints Tok Aba, soon Gopal was also slapped by Ochobot, he stated that he got the idea from TV4.

Ying and Yaya came to the house but no news about BoBoiBoy, the door rings and Yaya saw BoBoiBoy, when Tok Aba hugged him, he mentioned that his name was Ada Da.

Adu Du and Probe arrives and stated that he mentioned to BoBoiBoy that he and Probe are his best friends, Yaya tried to punch Adu Du but BoBoiBoy stopped him, Ying ordered Gopal to transform tires to Yaya's Biscuits to trap BoBoiBoy but he can free himself, soon, they were all tortured by BoBoiBoy.

Adu Du asked Tok Aba about his secret recipe but he didn't tell him, he ordered BoBoiBoy to get the secret reciper himself but Earth BoBoiBoy appeared and stop him.

BoBoiBoy Lightning was involved in a fight betwen his otherselves but Earth and Wind BoBoiBoy failed.

After they got beaten up, Probe says Awesome which reminds BoBoiBoy that he is not Ada Da, BoBoiBoy attacked Adu Du and Probe after lying to him.

After that BoBoiBoy Lightning joined together with his otherselves again and regain his memory.

BoBoiBoy Wiki has a collection of images and media related to Season 1, Episode 6. 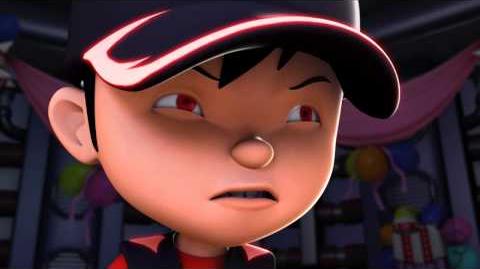