Tok Aba explains to the audience about Adu Du invading Earth to hunt for Cocoa Power and BoBoiBoy and his friends becoming Superheroes last week. He finds out that his Cocoa was used to activate Ochobot so he became his only assistant for free.

At the present time BoBoiBoy is playing with his Soccer Ball and trying to make a record of tossing the Ball in the air 100 times but as he approached to 100, he was scared by Gopal which made him angry, Gopal said that he is still searching for his power. BoBoiBoy helped him by guessing what his power is, they tried many times but they failed, when Gopal was about to catch the ball, Probe shot it and flew into the Junk Shop, which made BoBoiBoy to blame Gopal but he leaves.

BoBoiBoy tried to get his Soccer Ball inside the Junk Shop, but as he tried to get it, the green thing started to get taller until a monster came out, BoBoiBoy stated that it was Gopal's mistake, but the Multi-Monster was ordered by his boss (Adu Du) to destroy him, then he did.

At first, Adu Du thinks that BoBoiBoy is already dead, but later it was revealed that BoBoiBoy already splitted into 3 even before the monster attacked him, finally BoBoiBoy Lightning strikes him with a Lightning Sword.

(the Italic portion was cutted in TV3 and Disney Channel Asia)

The Multi-Monster splitted even more until they become smaller, Adu Du scolded Computer for not telling him but Computer said that she did.

Because of this, Adu Du planned to kidnap BoBoiBoy's friends, at the junk shop, the Multi-Monster admitted to BoBoiBoy that Adu Du wants to kidnap Ying, Yaya and Gopal.

Probe first tried to get Ying which leads to a chase, soon she was caught by Probe and take her into the ship,

Gopal is still searching for his powers, but then BoBoiBoy stated that saving Ying is much important. 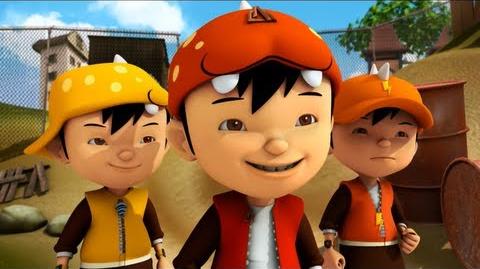