The Rise of BoBoiBoy

The episode begins with Adu Du recapping the previous episode to the audience.

The next morning, BoBoiBoy tries to recreate a lightning bolt from the previous night, but creates other objects instead. He manages it after he focuses and begins using them and his other powers to knock down cocoa can targets around Tok Aba’s backyard. He’s eager to share his powers with his friends, but Ochobot protests. BoBoiBoy tries to convince him by exploiting his fear of heights by placing him atop an Earth Pillar, but then Ochobot threatens to keep his ultimate power from him. One of Adu Du’s robot minions that he sent to find BoBoiBoy and Ochobot watches the exchange though the fence.

BoBoiBoy meets Gopal at the cafe, but before he can tell him about his powers, Ying runs by telling them they need to run because Yaya is coming with her cookies. BoBoiBoy asks what’s so bad about that, and Ying claims that that they taste bad enough to kill people. Gopal tries to break BoBoiBoy’s scepticism, but Yaya arrives with her cookie basket. Ying and Gopal excuse themselves from eating them, but BoBoiBoy accepts one despite his friends’ warnings. He is instantly disgusted and nearly blurts it out, but Gopal stops him and explains that Yaya goes crazy if anyone insults her cookies, forcing them to either lie about the taste, or avoid eating them altogether.

After discretely tossing the cookie away (it’s found and eaten by a cat, who faints), BoBoiBoy tells his friends about the aliens, Ochobot, and his new powers, but they don’t believe him since Ochobot refuses to reveal himself to confirm his story. He demonstrates his Wind power, and is about to use his Lightning power when Adu Du arrives to claim Ochobot. BoBoiBoy’s friends think he’s an actor from the “TV show” and ask for his autograph, until he attacks them with a blaster. BoBoiBoy uses his Elemental powers to protect them from the shots and later Super Probe, and his friends finally believe him.

Ochobot accidentally reveals himself in his excitement at BoBoiBoy’s near-victory, allowing Super Probe to capture him. Adu Du asks him why he gave powers to BoBoiBoy when Adu Du was the one who activated him. BoBoiBoy reasons that because Adu Du used BoBoiBoy’s cocoa to activate Ochobot, that makes BoBoiBoy his master. Ochobot agrees, and BoBoiBoy continues the fight and allows Ochobot to escape. When they try to recapture him, BoBoiBoy kicks Ochobot away and he is caught instead. To save BoBoiBoy, Ochobot gives each of BoBoiBoy’s friends their own power.

Yaya uses her power of flight and super strength to free BoBoiBoy from Super Probe’s grip. Ying uses her super human speed to distract Super Probe, and makes him fire his blaster at himself and Adu Du. Gopal prepares to deal the final blow with his powers, but for some reasons, they don’t work. Worse, Ochobot can’t remember what power he gave him. Adu Du takes advantage of the moment to capture him, Ying and Yaya. Ochobot instructs BoBoiBoy to use his ultimate power: Elemental Split, in which he splits so that each of his Elements have their own form.

BoBoiBoy Earth frees his friends using Earth Pillars and punches Super Probe into the air. The robot fires missiles at him, but BoBoiBoy Wind reverses their direction with a Tornado Attack. The missiles hit Super Probe, and as he and Adu Du plummet to the ground, BoBoiBoy Lightning electrocutes them with his Lightning Bolts. Defeated, Adu Du calls for Computer to retrieve them. He vows to return as he is being beamed up into his ship, but the beam’s sluggish pace allows BoBoiBoy to issue a final lightning attack on them.

BoBoiBoy combines back into one.

The Old Lady was asking for help to sell her desserts because no one wants to buy it until Yaya came.

The Random Guy was screaming for help because Potato, Yaya's former cat stole his fish, so Gopal went to thenarrow side of the Junkyard to find him but when he is about to get the fish he was tortured and scratched by the naughty cat.

In Adu Du's Spaceship, Adu Du was upset because the energy on the Cocoa the Slave Robots had stolen is not powerful unlike Tok Aba's Cocoa, because of this, they invaded Tok Aba's Cocoa Shop which scared Tok Aba but he was helped by BoBoiBoy and his friends.

Adu Du got upset again as his Robot Slaves return but didn't get any of the cocoa, which forced him to called BoBoiBoy as "BuBuBay" instead but Probe corrected it.

BoBoiBoy Wiki has a collection of images and media related to Season 1, Episode 2. 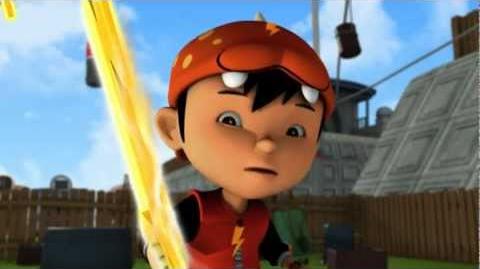 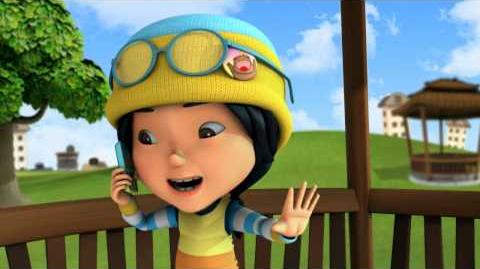 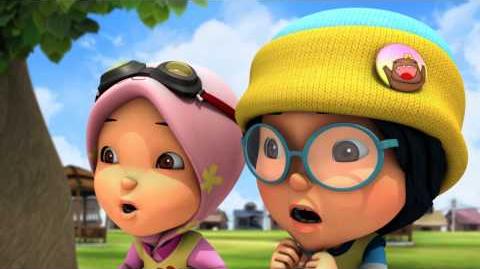 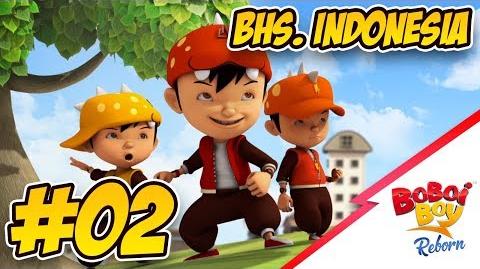