This is the 13th and final episode of the first season of BoBoiBoy.

The story starts when Adu Du narrates to the audience about the previous episode, at which he said that Bago Go can give him weapons to defeat BoBoiBoy, but he fainted. After he wakes up, he becomes angry when Probe sold his spaceship in exchange for Bago Go's powerful robot Mukalakus, the robot of destruction. Adu Du found out that Mukalakus is the perfect weapon to defeat his enemy BoBoiBoy, he told Probe to steal some left overs of Cocoa to activate Mukalakus.

At the playground, Yaya, Ying, and Gopal were sad because BoBoiBoy is going back home. Ochobot cried when BoBoiBoy said that he can't follow him, but rather he should help Tok Aba in his cocoa shop instead. Suddenly, Mukalakus attacked BoBoiBoy and his friends. They were surprised on the giant robot. While Ying tried to escape Mukalakus, Adu Du shoots her using laser, which made Yaya angry. She used her Super Powerful Impact Punch to destroy Mukalakus, but the robot is stronger than her. Gopal transformed several rocks and giant pipes into tomatoes and threw it to Adu Du and Mukalakus. Gopal then transformed them back to their previous forms, but they were destroyed by the Mukalakus using its laser and shot him. BoBoiBoy split into three and unleashed their full potentials of each.

They attacked Mukalakus, and because of BoBoiBoy's powerful attack of Lightning Sword, it short circuited and ran out of power. BoBoiBoy tells Adu Du to admit that he is defeated, but Adu Du doesn't want to admit it.

BoBoiBoy Earth transforms himself to BoBoiBoy Quake and has a self controlled giant rock monster called Earth Golem, which can help him defeat Mukalakus. With the help of BoBoiBoy Thunderstorm and BoBoiBoy Cyclone, they use a Combo Movement and destroyed Mukalakus.

After BoBoiBoy recombined, he fell asleep, as he is tired, and beside him was Ochobot sleeping. Later in Tok Aba's House, BoBoiBoy woke up, and his friends thank him for saving their lives. Yaya tries to give him biscuits, but Gopal stopped her. Instead, he transformed Ying's female domo-like badge into a biscuit which made Ying angry, making her chase and fight with Gopal inside the room.

Three days later, Tok Aba and Ochobot sent BoBoiBoy to the Rintis Railway Station. Tok Aba says goodbye to BoBoiBoy, and he says to Ochobot that hel can't follow BoBoiBoy. Gopal saw BoBoiBoy at the station platform and said that he should wait until he, Ying and Yaya arrives. They say goodbye to BoBoiBoy when he enters the train as a Mystery Boy comes out, and BoBoiBoy rides the Yong Pin Aerotrain to go home.

At the Junkyard, Adu Du vowed that he is ready to defeat BoBoiBoy again, but Probe said that he should stay with him instead. Six months later, at Rintis Island Primary School, the teacher announced a new student, which Yaya, Ying and Gopal anticipate. Much to their surprise, the "new student" is BoBoiBoy.

In the credits, he and his friends give thanks to the audience for watching the show by saying "Awesome". Probe and Adu Du also said goodbye and the extended version of Hang on Tight/Bersedia was played.

Differences between the Extended Version

BoBoiBoy Wiki has a collection of images and media related to Season 1, Episode 13. 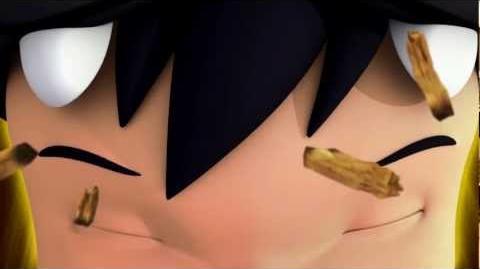 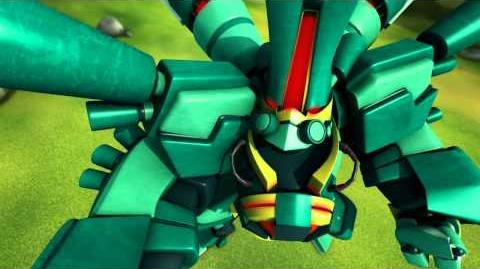