The Rise of BoBoiBoy

The episode begins en-media-res, with BoBoiBoy fleeing through closing doors from a huge purple robot. When one of the robot’s arm gets caught under the door, he fires two missiles at BoBoiBoy. He tries to roll under the last the door to evade them, but before we see if he makes it, the scene fades to a flashback from earlier in the week.

BoBoiBoy onboard a Yong Pin Aerotrain to Rintis Island. While on the train, he hears the train driver, Wahid, practicing his karaoke into the speaker system and enters the driver’s cab to tell him. The driver apologises over the speaker, and BoBoiBoy responds with his catchphrase, “Awesome!”

In outer space, Adu Du, an alien from Planet Ata Ta Tiga, approaches Earth’s solar system in search of energy sources with his minions, Probe and Computer. After scanning the system for energy signatures, they detect a powerful one from planet Earth and head towards it.

At the train station, BoBoiBoy’s grandfather, Tok Aba, is waiting for BoBoiBoy. Once the train arrives, BoBoiBoy and Tok Aba joyfully run and hug each other, but they both accidentally hug different people. Though slightly miffed, they reconcile. BoBoiBoy starts recounting the event with the train driver to Tok Aba on their way home.

In space, Computer reveals to Adu Du that the energy signature she detected was energy from cocoa beans, the most powerful energy source in the universe that is believed to be extinct. Shocked, he examines a hologram of Earth and concludes that there is so much cocoa since there are no life-forms on the planet, mistaking the moon for Earth. After being corrected, he orders Computer to find information about cocoa on Earth.

BoBoiBoy and Tok Aba travel to Tok Aba’s house via his scooter-bike, and BoBoiBoy jokes that the house is ancient, just like Tok Aba. However, BoBoiBoy marvels at how well Tok Aba set out his room for him and admires his view of the town from his window. Tok Aba mentions that he’s grateful that BoBoiBoy is now able to help him out at his shop, only to realise that he is already asleep, exhausted from his long journey to the island.

The next day, BoBoiBoy wakes up to an empty house and finds a note that Tok Aba left for him on the fridge with a set of instructions to meet him at the cafe. He locks the front door and reads that he’s supposed to thank his neighbour, Yaya, for the cookies yesterday. Yaya accidentally sneaks up on BoBoiBoy, startling him and explaining that Tok Aba already told her about him. After thanking her, BoBoiBoy starts following Tok Aba’s directions to his cafe. Yaya offers to give him directions, but BoBoiBoy waves them off in favour of Tok Aba’s instructions.

BoBoiBoy walks for an hour around the island before reaching Tok Aba's Cocoa Shop and discovers that the shop is actually close to Tok Aba’s house, which is what Yaya tried to tell him. She has already arrived at the cafe and BoBoiBoy admits that he was too shy to ask for her help. However, he mistakenly calls her “Mimi,” having already forgotten her name, which upsets her.

At the cafe, he meets Gopal, a regular who explains everything he knows about “Tok Aba’s Kokotiam” and constantly asks that his purchases be free. Gopal soon befriends BoBoiBoy as his “best friend” and asks if this allows Tok Aba to make another free hot chocolate. The cafe phone rings and BoBoiBoy answers. The caller is Ying, whom Tok Aba has also told about BoBoiBoy. She places her order on the phone, though she’s sitting next to BoBoiBoy at the cafe. She admits that she calls instead of ordering directly because she’s shy. Gopal says to ignore her as she does this a lot and turns to the cafe TV. Its screen suddenly flickers as if there’s bad signal and Adu Du is revealed to have hijacked the signal in order to transmit an announcement.

As Adu Du explains his plans for annihilation if they don’t turn over all their cocoa, BoBoiBoy changes the TV channel, thinking it’s a boring TV show, which Gopal protests.

In Adu Du's spaceship, Computer relays that nobody is paying attention to him for this reason. Probe returns to the ship with information he collected on the Earthlings. He claims that they chop up, boil and feed “small green aliens” (actually broccoli) like Adu Du to their children. In light of this terrifying revelation, Adu Du insists they use the Power Sphere to overcome them. As it requires a large amount of energy to activate them, he orders Probe to steal some cocoa for them to use. He steals cocoa from Tok Aba’s cafe, which is being manned by only BoBoiBoy as Tok Aba has gone to run some errands. As Probe returns to the ship, he notices a moving sign chopping an eggplant and runs away, screaming that humans also eat purple creatures. Alerted to the sound, BoBoiBoy spies the can in Probe’s claw and runs after him.

The chase leads BoBoiBoy to Adu Du’s spaceship. Probe delivers the cocoa to Adu Du, who hits him with a mug for relaying the wrong information about humans eating green aliens. BoBoiBoy sneaks past the control room as Probe is about to return the cocoa. He hides in the vent shafts and overhears that Adu Du intends to use the cocoa to activate their Power Sphere to take over Earth and seize its cocoa. He resolves to take the cocoa back to stop their plan.

They use the cocoa powder to initiate their Power Sphere’s delayed activation, but to immediately demonstrate the cocoa’s power, he tests it on Probe. Overwhelmed, Probe runs from the armoury and transforms into Super Probe. With the room empty, BoBoiBoy drops down from the vents, retrieves the cocoa can, and leaves. The Power Sphere wakes up at that moment and, mistaking BoBoiBoy for the one who activated him, follows him.

As BoBoiBoy escapes, Adu Du spots the Power Sphere rolling after him and thinks he is stealing it. He and Super Probe chase him (the scene from the episode’s beginning), and BoBoiBoy indeed manages to roll safely under the last door. He runs back to the cafe with the Power Sphere unknowingly in tow, where Tok Aba asks where he was. He tries to tell him about the aliens, but Tok Aba believes his story to be a dream he had after eating half the cocoa can. Under the counter, the Power Sphere rolls up to BoBoiBoy’s soccer ball, punches it away, and disguises itself as the ball.

Back at the house, BoBoiBoy asks himself if what he experienced was real, prompting the Power Sphere to respond. Startled, BoBoiBoy kicks it out the window and demands to know what it wants. The Power Sphere introduces itself as Ochobot, and because BoBoiBoy was the one whom he thinks activated him, he has to give him powers. He bestows BoBoiBoy with the power to control the elements on Earth, giving off an energy wave that Computer uses to locate him.

BoBoiBoy experiments with his powers, discovering his ability to create lightning constructs and gusts of wind. However, Tok Aba mistakes his powers’ sounds for an approaching storm and goes up to BoBoiBoy’s room to tell him to close the window. BoBoiBoy trips over Ochobot in a panic to get back and accidentally causes an earthquake. Terrified, Tok Aba rushes into BoBoiBoy’s room to find him reading as if nothing happened. After Tok Aba leaves, BoBoiBoy admires the earth staircase he created up to his window and rejoices about being a superhero. The episode ends as the staircase crumbles, causing another earthquake that scares Tok Aba.

BoBoiBoy Wiki has a collection of images and media related to Season 1, Episode 1. 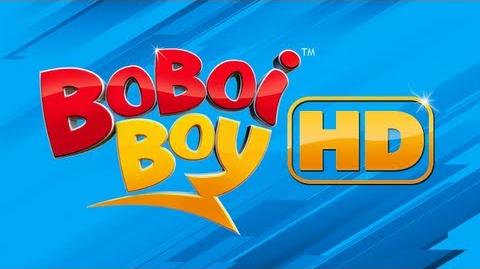 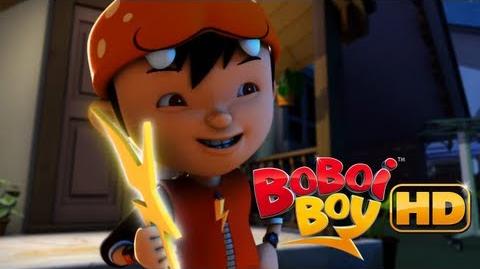 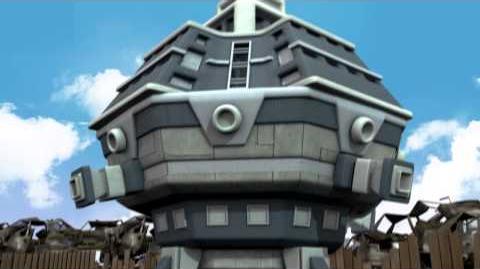