Special Episode: Save the Earth (Part 3)

In Cube Fortress, Adu Du was looking at the invitation pamphlet of Earth Day Carnival. Probe asked why Adu Du was pacing. Adu Du was mad and asked Probe to look at the flyer. Probe then wore his spectacle and looked at the pamphlet. The appearance of the special inmate, the Shield Monster, and the largest 3R Earth replica were printed on the template. Adu Du said that BoBoiBoy was promoting the peace and custody of the Earth, and BoBoiBoy wanted to show their success in defeating the shield monster. Probe said it was okay as long they were not the ones who were promoted as lost team. Adu Du opposed and thought that their duty as Supervillain Jero-Jero was to defend bad people and they wanted to fail the Earth Carnival and save the shield monster.

In the stadium of Rintis Island Primary School, the Earth Day Carnival started. There were some booths and exhibitions. Many people came to the carnival. Yaya and Ying were seen welcoming people with hailers at the entrance of the festival. They were also promoting the exciting activities in the festival. The launch of the fair, which would show the shield monster and the Earth 3R Replica would be held at 10 am on the main stage. Mr. Kumar was afraid to hear about the shield monster.

Fang was seen distributing the pamphlets. Yaya and Ying met Fang and asked if he saw BoBoiBoy and Gopal. Fang was mad at Gopal because he told Gopal to take the flyers but still didn't come back. Then, they searched for Gopal. Gopal was in the canteen buying ice-creams. After eating ice-creams, Gopal wanted to buy two more. Suddenly, Fang tied Gopal with his shadow power. Fang was very mad as Gopal didn't take the pamphlets. Then Gopal changed one of the ice-creams to a Red Carrot Donut flavoured ice-cream and offered it to Fang. Fang was shocked, and he dropped Gopal and began to eat the ice-cream. Yaya asked where was BoBoiBoy, and Gopal answered he bought that ice-cream to cheer BoBoiBoy.

In the class, BoBoiBoy was alone with the sad face. Then, his friends came to BoBoiBoy. Gopal then gave the ice-cream to BoBoiBoy. They asked why he was sad. Gopal answered BoBoiBoy's parents can't come even he asked his parents to come. Yaya asked what is the occupation of BoBoiBoy's parents. BoBoiBoy answered his father is an ambassador, and his mother needed to follow him. Then Ying reminded BoBoiBoy of Tok Aba and Ochobot, but he stated that Tok Aba and Ochobot could not come because he needed to open the Kokotiam on weekdays. Yaya and Ying then invited BoBoiBoy to come to the carnival. Suddenly, Fang got an urgent message. He was shocked and went out to somewhere. BoBoiBoy then wondered who welcomed the visitors at the entrance. Yaya said Iwan now was on duty.

Meanwhile, BoBoiBoy and Gopal played bottle to throw in a booth. Then, they played whack-a-mole which the head of the shield monster became the head to be whacked. Next, they went to 3R booth, which has the model of rubbish disposal, air pollution, and water pollution. The man in the booth taught them to recycle properly.

The mascot still had to be the picture taken after people wanted to take a picture with the mascot. Then, the mascot declared that the photograph session has ended. Then, they went to backstage and searched for the Shield Monster. They found the monster in the cage. Adu Du asked Probe to ready the attention shifter.

Meanwhile, BoBoiBoy, Gopal, Yaya and Ying talked about recycling. Yaya and Ying explained about the greenhouse effect and global warming, but BoBoiBoy and Gopal ran away. Suddenly, the announcement asked BoBoiBoy and his friends to go on the main stage. Papa Zola was on duty as the host of the launch. They presented the Earth replica that was made by recyclable materials. Then, they were about to introduce the shield monster. The visitors were booing the monster. When they opened the fabric, there was no shield monster in the cage. The monster was in the mascot costume with Adu Du and Probe. They were about to shoot BoBoiBoy. Iwan realized that and tried to tell BoBoiBoy, but there were too many people.

Flashback shows that Probe and Adu Du filled the replica with plastic and cement.

Probe was about to shoot BoBoiBoy, suddenly Iwan climbed the speaker and used hailer to shout at BoBoiBoy. The roar was so loud till the mascot fell. The visitors then realized the presence of Adu Du, Probe and Shield Monster. BoBoiBoy was so mad to Probe and Adu Du. Adu Du asked Shield Monster to attack BoBoiBoy. The monster suddenly didn't want to attack BoBoiBoy. He said that his contract to strike BoBoiBoy expired the day before. He only wanted to support his life. Then, Probe shot the replica to make it rolling to the visitors. Yaya and Ying helped saving people. Probe, Adu Du, and Shield Monster ran away.

The Earth model was about to hit Gopal. BoBoiBoy asked Gopal to change it to soft food, but Gopal changed it to Yaya's Biscuits instead, and he got flattened. BoBoiBoy Thunderstorm tried to break Yaya's Biscuits, but his Thunder Blade was broken. Mr. Kumar was in front of 3R booth talking to the man in the booth. Suddenly he was hit by the Yaya's Biscuits. People were running from the Yaya's Biscuit Ball. BoBoiBoy used his Earth Wall, but it can't stand against the ball. He tried to push it but failed. Then, Yaya used her power to lift the ball, and she punched the ball and broke it into many small pieces. When she landed back on the ground, the people applauded her, but as the biscuit pieces fell, everyone realised that it were Yaya's Biscuits and began to scream and run around.

In the evening, the scatter and mess of booth were seen in the stadium. Mr. Mat said it was a relief after they saved the situation but BoBoiBoy remembered that the Shield Monster escaped. Ying said what was important was they were safe, but Mr. Kumar and Gopal protested as they were bandaged. Suddenly, Tok Aba and Ochobot came. Tok Aba wondered what had happened, but BoBoiBoy hugged and thanked Tok Aba for coming. Tok Aba then gave postcard from BoBoiBoy's parents then Gopal wondered where Fang is all this time.

In front of Cube Fortress, Shield Monster thanked Adu Du and Probe for serving spaceport for him. Probe said the monster didn't help them, but Adu Du said as Supervillain Jero Jero, they can't be that stingy to help evil people. The monster told them that his task was only to get latest data and information on BoBoiBoy's power. He said his mission was successful, and he will get the bonus from his boss. They asked who his boss was, then the monster answered Ejo Jo and immediately departed from the spaceport. Adu Du and Probe were so shocked and knew that Ejo Jo was coming.

In The Haunted House, Fang projects a 3D hologram of Ejo Jo's Spaceship and is supposedly contacting Ejo Jo, but he contacted Captain Kaizo. Fang answered, "yes, the message was received and [he] is ready." 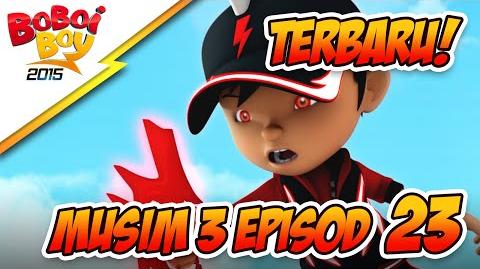 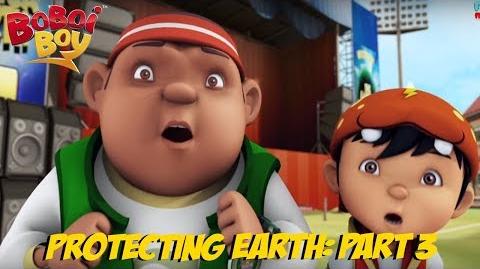