Special Episode: Save the Earth (Part 2)

BoBoiBoy got angry and then struck with Lightning Kris and Whirling Wind, but the monster defended by hiding in its solid shield. Then, Fang attacked him with Shadow Tiger. But, the tiger only can claw the shield and the monster sarcastically said the the cat was so cute. Yaya and Ying then called Gopal to help them to escape from the clamp. BoBoiBoy then attacked with many Lightning Kris but no effect on him. The monster sarcastically again said there was the inclement weather out there. Fang challenged the monster to get out from his shield if he was dare to do so. The monster answered that the shield was considered as his house, then challenged BoBoiBoy and Fang to come to his 'house'.

The monster then attacked again, this time with the shield spin. BoBoiBoy then used Earth Wall. Fang used the Shadow Jump, but before the shadow appeared, he was struck by the shield spin and BoBoiBoy was attacked too. Meanwhile, Gopal tried to open the clamp, but Yaya suggested Gopal to use his power. Then, he changed the clamp to white delicacies. Yaya and Ying finally got out from the trap. After that, Gopal smiled when thinking something. The monster caught BoBoiBoy in his hand. He revealed that his boss said BoBoiBoy is strong but he didn't think so. Fang asked who was his boss but the monster didn't want to tell. He used his 30 Ton Claw to weaken BoBoiBoy. Gopal then changed the hand to the French bread. Then, Gopal and the shield monster faced one-to-one battle. The monster attack with firming shots and Gopal struck with keropok lekor molecules attack. BoBoiBoy then destroyed the shield with Earth Punch to destroy the metal shield.

Meanwhile in Cube Fortress, Probe and Adu Du watched the battle between the monster and BoBoiBoy. Adu Du said that they should help the monster because the enemy of their enemy is their friend. Adu Du asked Probe to open up the parcel Probe just had bought. Probe revealed that he bought Superhero Jero Jero Suit Special Package. Adu Du got mad and asked why he bought that circus dress.

Probe was impressed when seeing the price of Megaton Eton Bomb X500. The price is 300 thousand and 30 cent. Probe wanted to buy 10, but suddenly he noticed something beside the bomb. Probe asked Bago Go what was that. He told him that was his son's birthday party dress, but suddenly he denied it. He said that was Superhero Jero-Jero Suit Package because he wanted to trick Probe. Bago Go said when someone wears it, he/she will be great like a superhero. Probe asked Bago Go whether he will get the superhero power. Bago Go pretended to check the label, which was shown as Pakaian Parti Kanak-Kanak (Kids Party Dress). Then Bago Go said yes. Probe asked what kind of power it is, and Bago Go said the power of confidence. Probe agreed to buy the suit, and asked the price. The price is 30 millions 30 cents after discounts. Probe said that was expensive and he should purchase the bomb instead. Bago Go tricked Probe by saying that the bomb has no discount, but the suit has a very big discount which was 80%. Suddenly, Bago Go's Son came and asked where was his birthday party dress. Bago Go lied by saying he didn't buy it yet and gave his son money to buy ice-cream. Then Probe commented that Bago Go's son is cute and bought two of the costumes.

After the flashback, Adu Du and Probe was seen wearing the suits. Probe asked Adu Du if he felt confident, and Adu Du said a little bit. Then, the siren was heard indicating that BoBoiBoy almost attacked the monster again. Then, Adu Du asked Probe to go there immediately.

In front of Rintis Island Primary School, BoBoiBoy and his friends directed the monster to go back because his shield was destroyed. Then, the monster said he has another shield, then he went into the dumpster. Suddenly, the dumpster exploded and the rubbish were attracted and combined to be his shield. Gopal tried to use his power, but he can't stand the bad smell from the monster. Then, he used Rubbish Shot. Fang used Shadow Cocoon to protect them. BoBoiBoy wanted to use fire power, but Yaya said it was dangerous because the rubbish can contain methane gas and could explode. When asked about water power, Ying said the trash water will be formed so it was not suitable. Fang asked them to attack the monster.

Yaya then attacked with her punches and Ying used her power to speed up Yaya's punch. Gopal was seen avoiding the rubbish, then Ying saved Gopal and brought him to other place. BoBoiBoy Quake then used Earth Upward to attack the monster. The monster then destroyed the earth wall and used Shield Suction to suck rubbish again. Looking at this, Yaya, Ying and Gopal went to the neighbourhood to seek help for cleaning Rintis Island. Fang and BoBoiBoy continued to attack the monster. BoBoiBoy used his Earth Golem to attack him.

Gopal, Yaya and Ying asked the neighbourhood to clean their surrounding. Yaya and Ying taught them how to recycle in the true way. Yaya and Ying used their power to transfer the rubbish plastic bag to the garbage truck. Ying sped up the time to ensure people clean up the road fast. Meanwhile, BoBoiBoy still fought with the Shield Monster. He used his firming shot to attack BoBoiBoy. Suddenly, Adu Du shot BoBoiBoy using his gun. Adu Du and Probe appeared with their superhero suit. They declared themselves as Supervillain Jero-Jero. The shield monster was happy to see Adu Du and Probe wanted to help him. Fang attacked Adu Du and Probe. Meanwhile, the neighbourhood was finished cleaned up the surrounding. Yaya, Ying and Gopal then rushed to in front of Rintis Island Primary School.

Adu Du shot Fang but he didn't shoot on target. Shadow Tiger attacked Adu Du until he lied down. Probe attacked Fang with Supervillian Jero-Jero Shot. The shield monster was battling Earth Golem, then he managed to break the golem with Breaker Claw Attack. BoBoiBoy Earthquake tried to use Earth Slam, but the monster used plastic knot to tie up BoBoiBoy. The shield monster thanked Adu Du and Probe. The monster asked them to shoot BoBoiBoy and Fang.

Suddenly, Yaya used her gravity power to abort Probe's shot. Ying kicked Probe and hit Adu Du. The monster used Shield Throw of tyres, and Gopal changed it to Red Carrot Donuts but they slammed into BoBoiBoy and Fang. Then Fang became very happy and distracted from the fight and began to eat the Red Carrot Donuts. Then, Yaya punched him until his shield was destroyed. He tried to recover his shield, but the surrounding was so clean. Knowing that they will lose, Adu Du and Probe ran away. BoBoiBoy, Yaya, Ying, Gopal and Fang attacked the monster simultaneously.

In the night in front of Cube Fortress, Probe said that they failed. But Adu Du stated that they would have not failed. Adu Du indicated that he found his new life objective. His life purpose was defending evil people all over the world. Started from that day on, they are Supervillain Jero Jero: Defenders of Evil, Admirers of Naughtiness. Meanwhile at Ejo Jo's Spaceship, Ejo Jo's computer reported that the shield monster failed. Ejo Jo didn't mind because it was only the beginning of his plan of the revenge to BoBoiBoy. He directed Computer to move to the Earth at maximum speed. 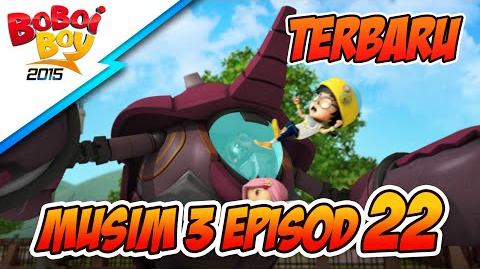