Special Episode: Save the Earth (Part 1)

In space, an asteroid was going to crash on Earth but Gopal was looking on a picture where an asteroid will crash on Earth. He was worried that the tests will be released. He ran in circles in their classroom. As his dramatic scenes on Ying's desk that he needs help from BoBoiBoy. Ying got angry because Gopal disturbed her on her desk.

Fang questioned BoBoiBoy what he will do. As BoBoiBoy answered Fang's question, Yaya told them that today Papa Zola will be announced the result of the math test. Fang and BoBoiBoy doing the same like Gopal do before. Gopal sits in his table and thought that he might be failing the test. He remembers that if he doesn't pass the test his father will punish him again. Papa Zola heard Gopal's word and question what did he understand.

Papa Zola told the students that Abdul Adu Dul is the best student he has ever seen because of the math problems he write on the board. BoBoiBoy told Papa Zola that Adu Du has been already evil again. Papa Zola gave the test paper to the class and told them that they passed. The class thanked Papa Zola for the test results. He told the student were passed the test but failed in cleaning the class.

Yaya suggests that they will clean it because there is a new coming teacher. It was Mama Zila who is the new comer. Everyone was surprised that she was the new comer. BoBoiBoy questions that why she will be the new teacher. Papa Zola answers that she is a good in separating things even trash because she cleans their house. He added that she will help the school for cleaning the environment. Gopal answered that if the place is not clean she might turn again into a monster (suffered in OCD). Yaya told the students that Mama Zila is coming. Papa Zola run through the field. BoBoiBoy answered that the class must clean not before she enters the room. BoBoiBoy splits into three until Mama Zila is walking in the hallway. BoBoiBoy Quake tells Ying to use her power to make the class clean more faster.

Mama Zila noticed something from the class. She enters the class and was surprised that the room is clean. The students greet their teacher. Mama Zila checked her record. She checks all A. Then she explained that they have a project. In the field, Yaya told Teacher Mama Zila that she will take good watch on them. Amar Deep and Stanley run away but Yaya and Ying were angry. Ying used her power to make them slow as well as Yaya used her powers to punish them. They apologise to Yaya and Ying for ignoring the project. Now Ying and Yaya discuss the 3Rs. Its a project where people separate their trash. Mama Zila corrects them too. Amar Deep questioned that what are the 3Rs. BoBoiBoy, Fang, and Gopal gave the wrong meaning. They were punished by Yaya. Mama Zila told Yaya and Ying to continue the discussion of the 3Rs.

The first R was Reduce, Second was Reuse and the last was Recycle. Gopal said they understand but BoBoiBoy questioned that where do they separate the rotten ones and the unrotten ones. Yaya and Ying answered that the rotten ones are in the Biodegradable and the not rotten ones are in the Non-Biodegradable trashcan. Yaya discussed that there are 3 trash cans too. It is Paper, Plastic, and other stuff. Mama Zila thought it was real. Yaya and Ying congratulate the students for listening and greeted them a happy Malaysian National Recycling Day (9 December). BoBoiBoy, Fang, and Gopal was freed. Mama Zila wants them to do the project now. Everyone joins the project.

In Adu Du's lair, Probe was watching a show about saving the rivers from trash by Awasman!. He enjoyed it a lot. He noticed Adu Du turn off the television. Adu Du questioned Probe what he was doing. Probe told Adu Du he was watching the show Awasman. He described it as an awesome show. Adu Du told that he is an evil alien and his enemy is the good superheroes like BoBoiBoy. Accidentally he hurt his arm. He commands Probe to call Bago Go. The computer showed the warning.

In the space, while the asteroid was falling to Earth, it was not an ordinary asteroid. It was detecting where was BoBoiBoy. As it continued to fall on Earth. In school, Gopal complains that it was a hard work. BoBoiBoy explains to that we have clean the whole school. Fang complains and suddenly Ying showed up and tell them that this is a project. They still have to clean the outside of the school. Fang complains again because it was too many but Yaya said they still need to follow the 3Rs. BoBoiBoy told them that they do it but when he look back he saw the asteroid falling to his location. The computer was alerting that there is a warning. Probe told Adu Du what was it.

In the outside of the school, the people saw the asteroid. BoBoiBoy told them to run away. It fell to the ground. BoBoiBoy questioned everyone if they are hurt. Yaya and Ying told BoBoiBoy to check the metal thing. The ground shook until the metal item open. The shield monster was the one who controls it. He told them that he doesn't know Adu Du. The monster explains everything until it was finished to talk. He activates the machine and turned it into a Fighting machine. It was too big for them to fight him. The monster attacks them. 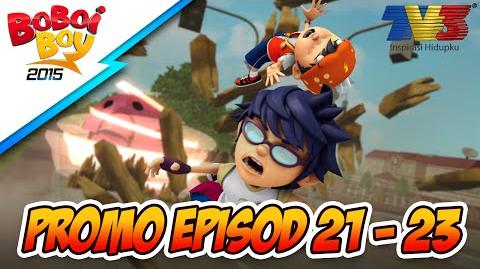 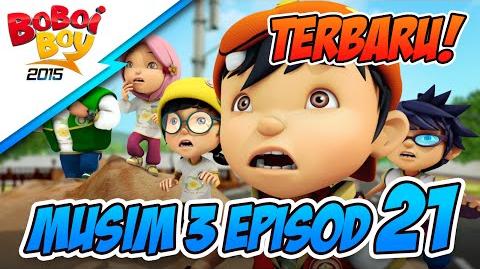