BoBoiBoy and his friends are fighting a group of thieves that robbed the Rintis Island Bank.

Early in the morning, BoBoiBoy heard a shout from the Canteen Lady's house. It was the lady selling food in his school's canteen who was shouting for help. She said that her chicken coop was burned.The canteen lady asked for help from BoBoiBoy to rebuild the chicken coop.

Meanwhile at the hideout factory, a gang of thieves planned to rob the Rintis Island Bank the next day. The boss with the red shirt and the thin man with the yellow shirt planned to ride a car from the gas station to the bank while waiting for the security guard exchange. While the fat man with the blue shirt will watch after the bank manager who was expected to leave the bank to go to the bakery at 8.00 a.m., to invade the bank and rob it. However, the boss said that they cannot use the stolen money within six months or else they might get caught by a police. Then they disguised their real names. The fat man will be called "Rob", while the thin man will be called "Robert", but the boss planned to use his real name which is "Roberto Santana".

On Sunday at the Cube Fortress, Probe woke Adu Du up. He said that their spaceship had arrived. Adu Du went to Tok Aba and BoBoiBoy's Kokotiam. Adu Du and Probe engage BoboiBoy to stroll with their spaceship. They were shocked because he wasn't BoBoiBoy, however, he was Tok Aba, BoBoiBoy's grandpa. Tok Aba and the staff wore BoBoiBoy's cap because of his popularity of being a hero. Adu Du asked them where BoBoiBoy was and Ochobot replied that he was busy helping someone.

In the Rintis Island Bank, the thieves came and were ready to follow their plan. First, they hid from the surroundings and looked at the movements of the bank manager until the coast is clear (except when Rob approached to the front door mirror, a child looked at him and asked his mother). Then Robert and Roberto tied the parking meter pole and while Robert started to tie the rope onto the car, Rob saw that there were two police officers. The boss was panicked and they have to start plan B, but Rob replied that there was only plan C. Then the thieves ran away through the front door of the bank, while the police officer contacted the police squad that there is a robbery. The thieves entered the bank and pleaded to everyone in the bank to protect the thieves from the police. The thieve found a safe place to hide from the police, which is the vault.

A news report from Ravi J. Jambul appeared in Tok Aba's television. Ravi reported that there was a bank robbery which happened in Rintis Island Bank. The thieves hostaged the bank manager, the people in the bank, and also the news reporter himself. Then, Gopal contacted BoBoiBoy via his band about the bank robbery. BoBoiBoy left his job of rebuilding the canteen lady's new chicken coop and went to the bank to help.

In the safe vault, the thieves and hostages hid. Rob cried because he felt so scared, but Robert answered that the place is safe and nobody else could enter. Suddenly, BoBoiBoy knocked the vault door causing Robert to feel surprised. Rob attempted to open the safe door to get autographs from BoBoiBoy, but Roberto didn't let him because he knew that BoBoiBoy will attack the thieves when the door is opened. Probe noticed that the door was closed again. Fang used his shadow attack to break down the door, however, Yaya prevented him because it would hurt the hostages. Probe suggested ways to solve this problem without any violence. Then, Probe told a story about an alien from Ata Ta Tiga who was the third child from the family with three children. He invented his laser lawnmower at the age of 2 and he was awarded with many awards including the Highest Royal Emperor Wisdom Award with his title of "Technology Expert Triggers The Revolution". Probe claimed that the alien he mentioned was Adu Du. After Adu Du was praised, Adu Du felt proud of himself and sought ways to solve this problem. Then, he asked Probe for a screwdriver and the both of them tried to open the door with the screwdriver.

Roberto asked to the other thieves to stop from opening the door, but Adu Du told them that they must stop making robbery and told it about his expressions as the ex-thief that understands the transition of the thieves. Adu Du then told Rob and Robert to repent and conscious from the evil thoughts but Roberto immediately closes the vault door hardly making Adu Du pain of clipped his shoulder while he stated that their crime is not the same as Adu Du who he conquering the planet.

BoBoiBoy anxiously looked at the Adu Du and asked Gopal to turn the vault door into jelly. Gopal complied but Roberto told them to stop which threatened to Adu Du's shoulder. Then Gopal stopped it and Adu Du have to feel the pain for a while. They have to think it the effective way to save Adu Du and the whole bank. Fang once again planning to use their power but BoBoiBoy replied that the power is not for violence. At the same time, Adu Du asked Probe to bring the iced lime syrup drink without lime. BoBoiBoy have found an idea to trick the thieves by serving drinks.

The air-conditioner in the safe vault were turned off and 25 minutes later, everyone in there was thirsty because the place is too hot. The thieves looked at the outside through the jelly hole on the door, everyone in outside were enjoying cold and delicious drinks. They know that they expect to exchange the drinks with the hostages and deceived them by installing the listening device into the drinks.

Rob was being tempted with the Ice Blended Chocolate Strawberry is held by Gopal and exchanged it with lots of money. Gopal blessed his transaction and he imagined to become millionaire by selling this drink with that price, however Ying blamed with his greedy of stolen money.

Then Rob, Robert and Roberto fighting each other for the chocolate drink until BoBoiBoy offered various drinks to them and also the hostages for free. Everyone in the safe vault are enjoyed with the delicious drinks until they satisfied. As the cliffhanger of BoBoiBoy's mission, the thieves yowling the bank manager about the location of the toilet. Apparently, the toilet was located at outside of the safe vault. After they struggling to hold their bladder while tempted by the hiss from the surroundings, Gopal pulled the fire alarm to make these thieves opened the safe door and escaped without hesitation but when the police bring them into the police truck, Rob, Robert and Roberto were finally arrested!

BoBoiBoy and his friends are praised by the bank manager after successfully arrested the thieves while Ravi conducted an interview with himself that thanked from these heroes. After that, everyone was shocked that Adu Du's Spaceship was finally arrived! However, the spaceship was surrounded by another five more spaceships. 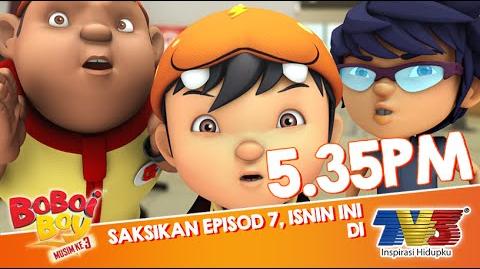 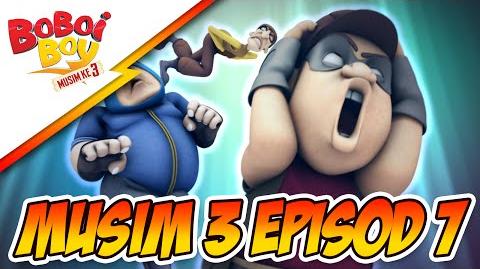