Rise Up! BoBoiBoy Water (Bangkit BoBoiBoy Air) is the 20th episode of Season 3. It shows the continuation of big battle between BoBoiBot and BoBoiBoy Water from the previous episode.

BoBoiBoy Water attacked BoBoiBot with Wave Hit but nothing happened. BoBoiBot said he was waterproof so nobody could do anything. BoBoiBoy Water attacked BoBoiBot with Water Shot but no effect on him. Ying said the water level is getting high then Yaya said BoBoiBot looked unstoppable then BoBoiBot said it was true. Suddenly, BoBoiBoy Water heard sounds and they were coming from the electric poles, where electric sparks were coming out due to the flood. He smirked and said to BoBoiBot that he knew his weakness. He then instructed Yaya to lift BoBoiBot Quake's trap. Yaya followed BoBoiBoy's instructions and lift the trap. Gopal changed it to murukku. Then Yaya lifted the trap and everyone hold on to the murukku. Adu Du instructed Probe to save him so Probe followed Adu Du's instructions. Then BoBoiBoy Water summoned Twin Water Eels. BoBoiBot laughed and said BoBoiBoy Water's Water Whale Sphere couldn't even destroy him and what could the Twin Water Eels do.

Then, BoBoiBoy Water changed to BoBoiBoy Thunderstorm and attacked BoBoiBot with Thunderstorm Water Eels and BoBoiBot exploded. Rintis Island's citizens thanked BoBoiBoy for defeating BoBoiBot. But, BoBoiBoy said he wasn't brave enough to use fire and water power again because that powers may not be controllable. Papa Zola promised that he would teach BoBoiBoy to control his new powers and BoBoiBoy agreed as long as the training was not to be paid. Papa Zola said that training was not to be paid but forced to buy "Bangkit Anak Muda!" CD that available on the store and the price is US$150. "What a shame..." BoBoiBoy said.

Gopal realised that Adu Du and Probe escaped. In Cube Fortress, Probe gave Adu Du some water and Adu Du told Probe to stand in front of him. Then, Adu Du threw the cup to Probe. Adu Du told Probe that it was Probe's fault which made them lost. Probe cried and said sorry but Adu Du said never mind. He knew how Probe wanted to be his favourite robot. Then Adu Du asked Probe to think the idea to defeat BoBoiBoy. Probe told that they have Bago Go.

That guy asked during the 7 months certainty of the idea was thought by Bago Go. And Bago Go agreed. Then Bago Go showed a business idea proposal of Hospital Alien Really Amazing Marvelous, or also known as H.A.R.A.M.. The new character asked what is special in there. Bago Go said that the hospital is specialized in genetics, magnetics, cybernetics, bombastics, and photosynthetics. And Bago Go presented Super Ejo Jojojo. Bago Go said that Ejo Jo was just like a lizard but he is just like a Sumatran rhinoceros now. The new character was impressed, but he wants to see its own power.

Bago Go was about to demonstrate Ejo Jo's power. But after pressing something in the buttons, Ejo Jo opened his eyes and breaks the glass in front of him. Ejo Jo escaped from there and he said "I am back BoBoiBoy!". 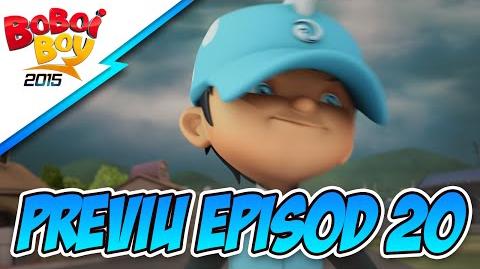 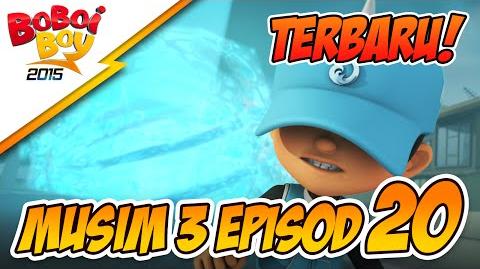