Retak'ka Tempest is a form of Retak'ka that have a third level wind power.

Retak'ka first used Tempest power to fight Hang Kasa. He almost defeated him but BoBoiBoy Blaze came just in time to save him. Tempest started attacking Blaze. Blaze switched to BoBoiBoy Ice and fires some Ice Arrows but missed. Tempest defeated BoBoiBoy and managed to tie him on a rock by switching to Darkwood. He lastly appeared when BoBoiBoy Glacier takes Retak'ka's elements back. 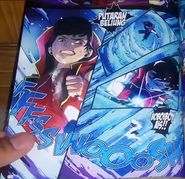 BoBoiBoy Wiki has a collection of images and media related to Retak'ka Tempest.