Power Spheres, or Power Spheras in BoBoiBoy Galaxy, (Sfera Kuasa/Power Sphera) are robots that contain powers, and are protectors of the galaxy.

Extracted from the Prologue in BoBoiBoy: The Movie Comic Book Adaptation, Planet Ata Ta Tiga was invaded by evil aliens, the Kubulus created the Floating Island out of their enemies' sight. In that island, the Kubulus created Klamkabot, a first generation Power Sphere. The evil aliens tried to destroy it but failed. Klamkabot defeated them and a new era of peace emerged from Planet Ata Ta Tiga.

Klamkabot did not accept the evil ways of Kubulus since Power Spheres were supposed to be protectors of the galaxy. He and other Power Spheres proceeded to attack them, but the Kubulus were well-prepared for their rebellion. They managed to destroy many of the Power Spheres who rebelled against them.

In order to save the remaining Power Spheres, Klamkabot teleported all of them across the galaxy, scattering them. He also teleported himself and the Floating Island away. Before he ran away, he vowed that he would prevent any of the Power Spheres to fall into their hands.

Ever since then, the Kubulus have been ordered to hunt down and capture all of the Power Spheres. To this day, abducted Power Spheres are used to "wreak havoc and destruction throughout the universe."

As shown in the movie and its comic book adaptation, all Power Spheres, including Klamkabot and Ochobot, are created in the Floating Island. The island used to belong to the Kubulus, but is now guarded by Klamkabot and the Power Sphere Lab Guard.

Capabilities shared by among Power Spheres include flight or levitation, scanning any subject, displaying holographic images and videos, transferring their energy to one another and self-healing. The latter was explained in the fan mails section in the official BoBoiBoy magazine.

As Koko Ci states in Episode 1 of BoBoiBoy Galaxy, Power Spheres must not be used frivolously since their powers can be strong enough to devastate the universe.

The power data in Power Spheres can sometimes be scrambled, hence, they may forget and give wrong information about the given powers. After BoBoiBoy kicked Ochobot to save him from Adu Du, his power data was scrambled. This caused Ochobot to mistake Yaya's powers to be super strength and flight, while Ying's power to be super speed. He also forgot what Gopal's power was.

Each Power Sphere has a single power that they can grant their wielders that is unique to them. Ochobot appears to be the sole exception to this rule with the ability to grant multiple different powers, some of which are apparently bestowed by other Power Spheres. They can also obtain new powers through upgrades, as shown in BoBoiBoy: The Movie when Ochobot is upgraded with teleportation powers.

Some Power Spheres have weapons. For example, Klamkabot has cannons that shoot laser beams.

Methods of power granting differ from Sphere to Sphere. For instance, Ochobot's powers come in the form of a watch called a Power Band or Power Watch; HookaBot transforms himself into a weapon for his wielder; BellBot uses his arms to act as a necklace and gives his power to whoever wears him; MotoBot produces various vehicles for his users, and so on. As revealed by Ying in Episode 12 of BoBoiBoy Galaxy, there is a category of Power Spheres called Proximity Type, which means that anyone within the proximity of the power field emitted by this type of Power Sphere can use the given power. For example, InviBot.

As stated in Season 1, Episode 1 and Season 1, Episode 3 of BoBoiBoy, Power Spheres are programmed to give their owners their power. Ochobot, despite being found and activated by Adu Du, mistook BoBoiBoy as his owner because he saw him first. Hence, he followed BoBoiBoy and ended up giving him his power. Tok Aba later became his new "owner" as he was activated using Tok Aba's Cocoa.

However, Power Spheres can also give powers to other people or other Power Spheres besides their owners if they think that they deserve or need them. This was proven in:

On the other hand, Power Spheres can refuse to give powers to people whom they deem unworthy. For example, Ochobot refused to give power to Adu Du in the past (Season 2, Episode 8 flashbacks), while Klamkabot refused to give his Teleportation Power to Bora Ra. Because of this, their powers are often extracted by force through machines or using powers from other Spheres as shown by hunters like Tengkotak. Yoyo Oo used a machine to try to steal the Teleportation Power from Klamkabot, and Bora Ra stole the Teleportation Power from Ochobot using his Black Hole Power. However, forceful extraction of power can weaken and damage Power Spheres severely.

If the bearer cannot control the power given, Power Spheres can take a portion of the power's full potential away. The most notable example is when Ochobot took away a portion of the Shadow Manipulation because Fang was unable to control the Shadow Dragon. Though this had side-effects of both of them losing their memories of the event, and Ochobot fainting whenever he saw Fang. This damage can be repaired once the Power Sphere recovers the memories that have been lost as seen in the ending of Season 2, Episode 8. As revealed in Season 2 Finale, Power Spheres can also restore the full potential of a given power.

Power Spheres cannot create and give new powers once they used up their given powers as revealed in Season 3, Episode 25 as Ochobot only has five powers that time. However, they can give out their energies to upgrade the powers given in Power Bands as shown in the movie.

Some Power Spheres run away and began hiding around the galaxy.

A Power Sphere was attacked by Bora Ra, an evil alien.

A Power Sphere being captured by evil aliens.

A Power Sphere being reprogramed as a weapon of destruction.

The other generation Power Spheres. 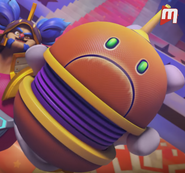 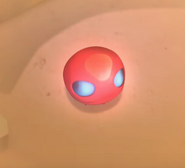 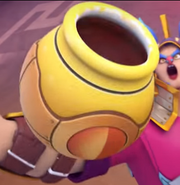 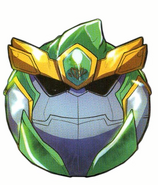 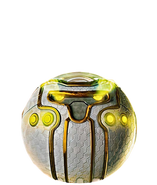