Papa Zola & Mama Zila is the 10th episode of Season 3.

In Gopal's house, he was playing Papa Zola 5: Truth Against the Forces of Darkness while calling BoBoiBoy to come join. Suddenly, his father was mad because Gopal break the promise to clean up the warehouse.

BoBoiBoy and Ochobot arrive at Gopal's house. Mr. Kumar command them to help Gopal clean the warehouse. Mr. Kumar also tell that it was a game called KKBIS 2 (Kasi Kemas Bersih Ini Stor Dalam 2 Jam). BoBoiBoy then split himself and clean the room directly. Then, they push a wardrobe and suddenly found a secret room. But, Mr Kumar command them to buy some Tok Aba's ice chocolate. Then, they go to Tok Aba and BoBoiBoy's Kokotiam, but found that Papa Zola was crying about his wife. BoBoiBoy, Ochobot, and Gopal was confused, but Papa Zola try to hid the truth. Finally, he telling that he was missing his wife since his first arrival in first season. Papa Zola then tell that she was are in the rare game that out in 15 years ago called Papa Zola: Mystery of Shining Girlfriend (Misteri Kekasih Terang Benderang). Gopal then tell that it was the hardest game and no one can go to the final level and only one person that were been in final level and the production was stopped. Gopal, BoBoiBoy, and Ochobot then visit a game shop named Ah Beng and Sons Game Shop. The owner show them the game (Ochobot was outside because of remarks). He tell then it was a legendary game that very success and many people want to have it. But after 1 week, many people return it. He also tell that there was 1 people that arrive in boss stage and reveal it as Mr. Kumar, Gopal's father.

Soon that Gopal asked about the game. Finally, the mysterious room was open and it was a room contained many things about Papa Zola. It also shown many games such as Papa Zola: Truth of Cessasion and Papa Zola: Scratching Evilness. Mr. Kumar then tell that he was a person like Gopal that always waste time to play a game and doesn't want his son to follow him. Finally, Gopal promise to play the game once and limit his game activity. Adu Du then teleport BoBoiBoy, Gopal, and Papa Zola to the game and hold with 3 person: Papa Zola (Mr. Kumar), BoBoiBoy (Ochobot), and Gopal (Adu Du). They play the game well instead Adu Du was confused and scrambling with Probe. They finally arrive in stage in Mama Zila's castle. They finally can go home, but there is one problem that happen to Mama Zila. 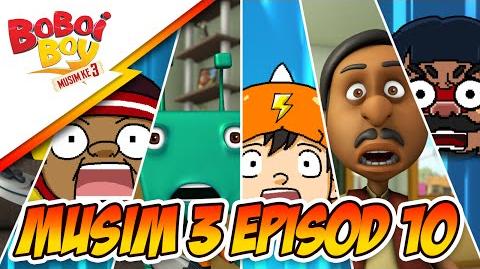