Pangobot & The Onion Monster (Malay: Robot Pango & Raksasa Bawang) is the 14th episode of BoBoiBoy Season 3. This episode marks the first appearance of the Onion Monster.

At the night in Rintis Island Prison, the security was bring Rob, Robert, and Roberto the dish of fried rice for them. The criminal want to get and order, but they been deceived. Suddenly, Probe that disguised as the security was ordering a big cake as a surprise for them. The criminals was confused. When Roberto want to read it, Rob was eating the part of cake. Robert was read that they need to wait the suprise in 3 AM. To see the surprise, Roberto was keep standing while the rest was sleep. At 3 AM, Adu Du was crack the wall and free the criminal. Roberto was asked about the action, but Adu Du were apologized and give them a quest to vanish, mase, mash, smash, destroy and kill BoBoiBoy. The criminals were confused about the quest because BoBoiBoy was a superhero that have power. Adu Du solve their question by give them Pango Robot to attack the school.

Pango Robot then attack the school and steal many things such as goalpost, tire of Papa Zola's car, the box of Math Exam, and else. BoBoiBoy Cyclone and BoBoiBoy Thunderstorm attack the robot many time using Storm Struck and Storm Slash, but the robot turn himself as a ball or known as Sphere Shield. The shield was very rigid and hard that make BoBoiBoy Thunderstorm's Thunder Blade and BoBoiBoy Cyclone's Cyclone Hoverboard cracked. Probe take the piece and bring it to Adu Du. The criminals was speak and reveal that Adu Du become their new boss. BoBoiBoy Quake was worried and want to help them, but Papa Zola command them to continue the exam. Abdul Dudul that already finish his math test was running to BoBoiBoy Thunderstorm and pretend to save him and taking his hair sample. Adu Du was blaming the robot and attack them with his pistols, but the battery was low; then he threw a rock and suddenly damaged the robot.

The Robot replied it with Pango Tongue Attack and crash Adu Du with the slow style because they cannot damaged their bosses. The Math Exam was finally done and Gopal, Ying, Yaya, Fang, and BoBoiBoy Quake come to attack Pango Robot. Fang was try to attack, but the Onion Monster was create a gas that make them cry and cold. Adu Du come to him and cleaning his eyes and put the teardrop sample at the tube. the Onion Monster was coming and reveal himself as League of Evil Villains.

In Cube Fortress, they was plan to destroy BoBoiBoy by taking the sample of Thunder Blade, Cyclone Hoverboard, Earth Golem, BoBoiBoy's hair, BoBoiBoy's tear, and BoBoiBoy's fingerprint. The Criminals was confused, but Probe share the idea by using his book, but Adu Du refused in order to create a monster by mutating the onion.

The Onion Monster release his Onion Attack and make the heroes was cry and cold. Yaya and Ying close their nose and eyes that saved them from the gas. Ying reason that she always help her mother to cut the onion and Yaya added by closing their nose while chop the onion. Yaya also added by crushing the onion as the ingredient of her biscuits. Yaya and Ying create the combo by combining Gravity Sinker with Thousand Speed Kick and added with Impact Punch, but Pango defend the monster and he also using his tongue and throw Yaya away. Fang attack him with Shadow Attack, but the robot was rolling as Spinning Rolling. Fang added with Shadow Tiger, but they run together and got rolled. The Onion Monster attack Gopal and trap him. Yaya then give BoBoiBoy her glasses and clip. BoBoiBoy release his power and attack Pango Robot with Earth Golem. Probe was taking the pieces and home to the headbox.

BoBoiBoy Cyclone and BoBoiBoy Thunderstorm combine their power and attack the robot. The Onion Monster try to release the ring, but Gopal change it to onion ring. He also bring Canteen Lady that scare the monster. The monster try to fly, but defeated by Yaya using Collision Punch and fall together with Pango's cracked shield. Adu Du was come to BoBoiBoy with the glove scanner and get BoBoiBoy's fingerprint. Back to his lab, Adu Du, vowing to destroy BoBoiBoy and all of Planet Earth, finally finished his experiment and created BoBoiBot. 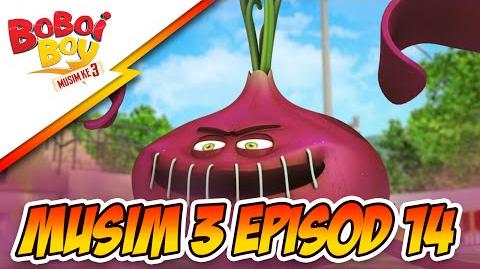