Perisai Tempur Angkasa-I (Battle Space Robot-I) is a character in the BoBoiBoy series. PETAI is a battle robot, he looks like a fiercer version of Probe, except he has a big black body.

He attacked BoBoiBoy once again. Then, he was eaten by Fang's giant Shadow Dragon.

5 units of PETAI robots were launched by Ejo Jo to attack BoBoiBoy's Gang, but they were destroyed by Captain Kaizo and Lieutenant Lahap. 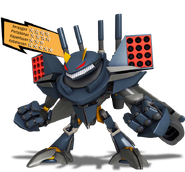 PETAI with his shield

Remains of the damaged PETAI robots in Season 3, Episode 24