Ochobot is a character in BoBoiBoy and BoBoiBoy Galaxy. He is the Power Sphere responsible for BoBoiBoy's Gang's powers.

Like all power spheres, Ochobot was created in the power sphere lab, presumably by the Kubulus. Due to many wanting to harness the powers of the incredible power sphere, Ochobot presumably fled in hopes of escaping the Power Sphere Hunters. However, some time down the way, he is somehow deactivated and procured by Adu Du and has been in his possession until Adu Du arrives on Earth.

Ochobot first appears when BoBoiBoy tails Probe after the robot has stolen some of the cocoa powder from Tok Aba's shop. After BoBoiBoy mistakenly activates him, Ochobot secretly escapes alongside BoBoiBoy and disguises himself as BoBoiBoy's soccer ball. He later reveals himself to the young child, giving him his soon-to-be iconic Elemental Powers, Elemental Split and the Elemental Forms. When BoBoiBoy has trouble trying to defend Ochobot from Adu Du, who wishes to take the power sphere back, Ochobot gifts BoBoiBoy's friends: Yaya, Ying, and Gopal, different types of powers. However, in the battle, Ochobot forgets the true nature of the powers that BoBoiBoy's friends possessed.

For the rest of the series, he can be seen advising and helping BoBoiBoy, even giving a power band to a new ally, Fang.

During the movie, Ochobot was looking forward to a camping trip, that BoBoiBoy continually forgets to attend due to his superhero duties and is duly upset. He is suddenly contacted by Klamkabot, who BoBoiBoy mistakes as his grandfather, who is being hunted by Power Sphere Hunters. He is later captured by Bora Ra, causing a BoBoiBoy's Gang and Papa Zola to mount a rescue expedition to save Ochobot. Ochobot was able to escape thanks to Klamkabot and was finally able to meet up with BoBoiBoy once more. After Klamkabot provides a distraction, BoBoiBoy manages to take Ochobot to the Power Sphere Lab, where Ochobot is upgraded and inherits Klamkabot's teleportation ability.

Although it's unconfirmed what kind of Power Sphere Ochobot is, due to the nature of his abilities (before the upgrade), Ochobot is likely the Power Sphere of Manipulation, since all the powers he had gifted to BoBoiBoy's Gang has to do with the manipulation of a certain substance or nature with the help of Power Bands.

During BoBoiBoy: The Movie, he has inherited Klamkabot's status as the Power Sphere of Teleportation, and is now able to open portals and teleport people to any location, as long as he knows where they are being headed.

In BoBoiBoy Movie 2, it is revealed that Ochobot is actually the Power Sphere of Suction.

Ochobot is yellow and spherical in shape. Ochobot has five hooded compartments that hold the hands and wheels that can be removed when the Ochobot is about to use them. Ochobot can also disguise himself as a ball to prevent him from being detected by others.

After Ochobot was modified and upgraded in the Power Sphere Lab, Ochobot's mini-appearance changed from its original form but still retained its identity as a yellow Power Sphere. His wings and hands are complemented by a pair of light blue eyes. Ochobot's face is now an LED screen, it is a sophisticated alien technology. In this form, Ochobot has the Teleportation Power transferred by Klamkabot.

Ochobot is a robot that is always cheerful when he is with BoBoiBoy or his friends. He likes to spend time with BoBoiBoy by doing activities like camping. However, Ochobot can also feel sad when Boboiboy can't keep his promises, as seen when Boboiboy was unable to attend the camping activity in Boboiboy The Movie.

BoBoiBoy Wiki has a collection of images and media related to Ochobot. 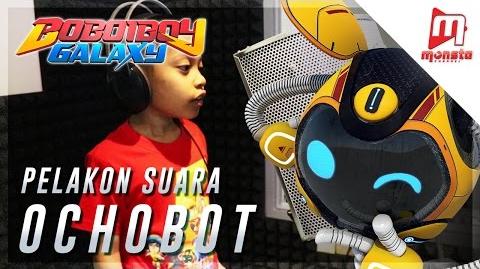