Team BoBoiBoy is sent to enter the dangerous and thrilling Nova Prix Space Race tournament in order to win the coveted prize: a Power Sphere.

The episode opens with a showcase of the dangerous Nova Prix Space Race, revealed to be a playback being shown by Tarung and Koko Ci to BoBoiBoy's Gang in preparation for their next mission. Fang explains that the event is held every decade with a difficult track, and racers can do whatever it takes to win, even resorting to ruthless acts as seen in the video. This year, among the lucrative prizes for the top places is the Power Sphere, TrophyBot. The gang are tasked with retrieving by winning the race, despite having no racing experience. Koko Ci assures them that they are lucky that they will only have to enter two racers as the registration fee is too expensive for their sponsor to pay for all of them. It’s decided that Ying, Yaya and Gopal will be the support crew while BoBoiBoy and Fang enter the race.

Their sponsor is then revealed to be Bago Go, who agreed on the condition that the racers would be ambassadors for his latest endeavour, the Cosmic Cosmetic X9000, by wearing the make-up while competing. Adu Du is also revealed to be racing with Probe as his vehicle to win TrophyBot, paying the registration fee using his Plutonium Evil Credit Card. The other racers are announced to be Pok Pok Tus from Planet Gurunda, Heely Wheely from Planet Kasuta and The Bikembars (named Red and Blue) from Planet Brotora, the Prix’s defending champions.

The race commences, but The Bikembars hang back and let the other racers speed off. Heely Wheely takes an early lead and dodges projectiles from Pok Pok Tus, who is close behind. Suddenly, The Bikembars come up on either side of the two racers and trap them between their vehicles. Heely manages to escape, while Pok Pok is sent spinning and crashes his car, putting him out of the race. Behind the group, BoBoiBoy and Fang dodge the projectiles sent flying from the damaged car, which wash the make-up off.

As the boys head for the next leg of the race, they are bombarded from behind by missiles from Adu Du. Fang hangs back to deal with Adu Du using his Shadow Spikes and allows BoBoiBoy to go ahead. He catches up to The Bikembars, but they activate spikes on their wheels and ram his bike on either side. Ying instructs him to use his Wind power to blow them away, allowing him to pull ahead right as Fang catches up with him. The boys unknowingly enter the meteor zone and struggle to dodge them even using their powers. Heely speeds by, her car able to predict the incoming meteors, as well as The Bikembars, whose bikes are just durable enough to be able to take direct hits from the meteors.

BoBoiBoy and Fang make it through the leg with Adu Du coattailing them and approached the pit stop. There, it’s revealed that The Bikembars own (and mistreat) a Power Sphere named DashBot who can instantly repair their bikes to perfect condition. Upon finding out that Yaya’s cookies await them at the pit stop, the boys insist that their vehicles are fine and carry on racing. As Yaya mourns the waste of her efforts, Heely passes by and grabs one from her hand. After eating it, the repulsive taste causes her to faint and lose control of her vehicle, crashing it and putting her out of the race.

The remaining five racers head into the final leg. To make up some ground, BoBoiBoy propels he and Fang into third and fourth place using Lightning Dash. This prompts The Bikembars to fuse their bikes together, with Blue facing forwards to drive them through the track and Red facing backwards to fire a cannon at the racers behind them. Adu Du catches up to the group using banned Cocoa Nitro fuel, and crashes Fang’s car by severing the Shadow Binds he was using to hold onto BoBoiBoy’s bike while they were dashing. Struggling to fend both of them off by himself, BoBoiBoy splits into Lightning, Wind and Fire.

After taking care of Adu Du with their Elemental Exhaust, the three forms fuse their bikes together to collectively use Lightning Evasion to dodge the cannon blasts. Wind temporarily blinds The Bikembars with a Whirlwind Blast, which buys them some time to form a Maximum Sphere Combo Strike. The attack is enough to take The Bikembars out of the race, but Adu Du suddenly races past as a result of the Cocoa Nitro making them speed up uncontrollably. BoBoiBoy uses Maximum Dash in his Lightning form to catch up, and the two racers are neck-and-neck as they approach the finish line.

Later, at the winners’ ceremony, it’s revealed via instant replay that Adu Du’s antenna inched across the finish line first, making him the winner. However, it turns out that the prize for first place isn’t TrophyBot, but a year’s supply of Cosmetic Cosmic X9000, courtesy of Bago Go’s sponsorship. TrophyBot has been demoted to runner-up prize and is presented to BoBoiBoy. The gang rejoices over their successful mission, while Adu Du bemoans his karma. The episode ends with Adu Du furiously refusing Bago Go’s offer to be the ambassador of his product, and BoBoiBoy remarking “Awesome!”. 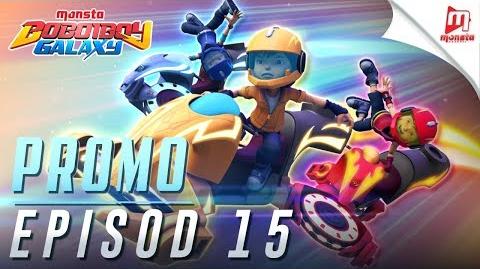 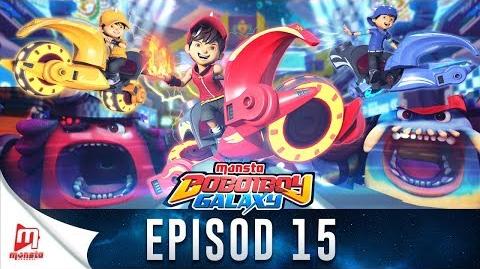