Mystery of the Barren Mountain[1] (Misteri Pergunungan Tandus) is the 5th issue of the BoBoiBoy Galaxy Season 2 Comic.

In an effort to retrieve the materials seized by Qually, BoBoiBoy and his friends are stranded in a barren and uninhabited mountainous area.

But something awaits them in the mysterious Snowasis. Can BoBoiBoy unravel the mystery of Snowasis and recover the lost ingredients?[2]

BoBoiBoy and friends were chasing Qually who betrayed them by sabotaging their spaceship and stealing Sky Coconuts among the ingredients needed to complete their mission. Yaya examines the ship's screen and finds that the next material, the Blue Apiru, is in the area near their location, while Fang drives the ship at high speed through the cracks to chase Qually's spaceship. Ying tries to get out of the ship and tries to slow down Qually's ship with Slow-Mo Speed.

However, BoBoiBoy's gang spaceship is once again plagued by engine failure. On Fang's instructions, BoBoiBoy inspects the ship's engine and finds another Qually's shovel planted in the ship's system. Once again Fang's spaceship crashed due to the same cause as the last one. Gopal tries to soothe Fang's amazement over the damage to "Lily", making Fang feel awkward hearing the nickname for his ship mentioned by others, but Gopal promises to keep it a secret.

BoBoiBoy invites Gopal to go find Qually, Fang once again tries to repair the ship, while Ying and Yaya search for information about the Blue Apiru on Internet. Just starting the journey, BoBoiBoy and Gopal see smoke billowing in the sky which is thought to be the place where Qually’s ship crashed. The path in front is divided into two paths, and even wolf roars can be heard. BoBoiBoy and Gopal follow a narrow path to track down the source of the roar, then meet a small white fox-like creature with a flower bud-shaped antenna, which is crushed by a pile of rocks, a sign of imminent danger!

Meanwhile on Fang's Spaceship, after searching for information, Yaya and Ying study that the Blue Apiru is not a real fire, like a sunflower that is not the sun. Guided by this shadow, they finally found what they were looking for.

Turning to the landslide, threatened BoBoiBoy and Gopal, BoBoiBoy turns to BoBoiBoy Quake and summons the Earth Golem to protect them from the rubble, while Gopal turns the rubble into an anchovy scoop to save the white fox. BoBoiBoy finds this red-eyed and blue-tailed white fox cute and tame, but Gopal is scared for fear it might be a vicious monster. Seeing the fox starving, BoBoiBoy asks Gopal to feed him, but Gopal refuses to hand over the food supply to the fox, instead turning the rubble into fruit for the fox to eat.

Gopal reminds BoBoiBoy of the Blue Apiru, and the fox is even sensitive to the sound and barks to draw their attention to a small cave located nearby that is understood to be the path to the source of the material. After crawling along the narrow cave, BoBoiBoy and Gopal reached a cliff at the end of the road, and under the cliff was a frozen round pool clamped with snow with lotus-like plants in the middle.

Once again the fox barked loudly as he pointed his snout at a board down there. BoBoiBoy and Gopal examine what is in that direction and find Qually on a snowy cliff. Qually heard a fox barking and looked at BoBoiBoy and Gopal on the cliff.

Just face to face with a former friend, BoBoiBoy is contacted by Yaya to inform them that the Blue Apiru is a kind of flower, and it is indeed valid that it is a flower located in the middle of a frozen pond. Yaya added that the flower, if threatened, would close the petals and not reopen for a year. So BoBoiBoy, Gopal and the fox rush down to stop Qually from stealing the flower.

BoBoiBoy turns into BoBoiBoy Ice to chase Qually who is gliding over the pool with the help of a pair of shovels as a ski stick. Ice tried to block with the Ice Wall, but Qually managed to dodge and deflected with his Fire Shovel. Gopal slips after climbing the pool, so Ice makes a pair of ice skates and tells Gopal to fight Qually as well. Qually delayed Ice and Gopal by throwing his fiery shovels while rushing towards the Apiru Biru flower, reciprocated with an outpouring of Ice Arrows and repeated Malaysian Ice Cream Transformation. However, an arrow of ice headed towards the flower, almost hitting but jumping.

Qually throws a Pepper Powder Bomb towards Ice and Gopal, and Ice quickly summons Ice Shield to take cover from the explosion. But it seems that Qually's style arrives first at the Blue Apiru flower and is ready to pick, but the fox comes to interrupt by dropping Qually from the flower. Gopal converts the frozen pool water to Mixed Ice Water to immerse Qually, then Ice turns the pool back to ice with the Freezing Arrow so that Qually gets stuck.

BoBoiBoy asks Qually why he stole the ingredients, and Qually replies that he aspired since childhood to be a cook, but because his parents didn’t bless him, he ran away from home and traveled solely to learn from Guru Gaharum. Gaharum also requires Qually to find four ingredients, and after hearing about a group of young people looking for the same ingredients, namely the BoBoiBoy's gang, he comes with them.

Gopal was overwhelmed to hear the story even though it was hard to believe his words, but Qually took the opportunity to throw the Red Onion Bomb to hurt his opponent’s eyes and used the Fire Shovel to escape. Qually extended his shovel to be used as a catapult to throw it towards the Blue Apiru flower, and he even managed to pluck the bud head, then he escaped the material with a spaceship.

A few minutes later, BoBoiBoy and Gopal return to the spaceship while shedding tears from the pain of the Qually Red Onion Bomb. Suddenly, the fox speaks and grows large, introducing himself as the guardian of Snowasis (the frozen pond he visited earlier) who is responsible for protecting the Blue Apiru flower from falling into the wrong hands, even intending to gift the flower to BoBoiBoy for rescuing it.

At a time when the opportunity to complete the mission has faded, Yaya tries to raise the spirit of the team to try their best with the two remaining ingredients, namely Holy Chili and Crystal Salt. 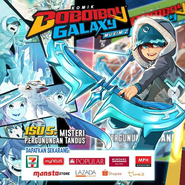