With the help of PasuBot, the Oakuat seed given by Master Gaharum is now growing fertile. Unfortunately, BoBoiBoy's joy doesn't last long when his best friend Gopal is kidnapped by a mysterious enemy.

What is the real goal of the mysterious kidnapper? Can BoBoiBoy defeat him and save Gopal?

Gopal’s father, Mr. Kumar was hawking ice cream at Rintis Island Park, when he was approached by a mysterious person wearing a red hat and coat who asked where BoBoiBoy was, and he replied that he was at the Kokotiam. When the person asked where Kokotiam was, Kumar told him to buy an ice cream if he wanted the answer. The person bought a red bean flavored ice cream. At the same time, Gopal appears and tells his father that he is going to the Kokotiam. Kumar was about to order Gopal to bring the person there, but the person had suddenly disappeared, leaving the payment for his ice cream using coins with a butterfly design. On his way to the Kokotiam, Gopal is mesmerized by a bright blue butterfly which perched on his face.

Meanwhile at the TAPOPS-U Greenhouse, BoBoiBoy is watering the Oakuat seedlings planted in PasuBot, while Yaya and Ying watched in amazement at how fast the tree grew. Yaya asked when the tree would bear fruit, and PasuBot replied maybe in a week or a month. Tok Kasa was also present, praising BoBoiBoy and his friends' ingenuity and ability to use common sense to solve seemingly impossible problems. When Yaya asked if it is true that Oakuat fruits can produce latent power, Tok Kasa replied, that according to legend it can, but no one has ever tried it because they have to wait a long time to grow.

Soon, BoBoiBoy rushes out to the Kokotiam to looking after the store. Accompanied by Fang while waiting for Gopal's arrival, he is approached by a blue butterfly that emits an image of Gopal wrapped in a cocoon with a voice message telling BoBoiBoy to go to the park alone to meet his friend's kidnappers.

BoBoiBoy obeyed the order and rushed to the Rintis Island Park. There, he meets the mysterious kidnapper who introduces himself as Maripos, a traveler who hunts for the amazing things found around the galaxy. He was summoned to Earth to see a child who once defeated the “ruler of the seven elementals”. While showing BoBoiBoy the condition of Gopal, who was hanging in a cocoon on a tree trunk, Maripos claims one of BoBoiBoy's elemental powers in exchange for the hostage.

BoBoiBoy stubbornly refuses to hand over any power, while Maripos throws a bat at Gopal's tree to reveal Fang, who was hiding among the foliage. As soon as Fang was seen, Maripos floated into the sky using Sky Step Jutsu. Fang chases after him by using Shadow Eagle Fusion and tries to do a Shadow Eagle Fusion Knock on Maripos, but is repulsed by the powerful blow of Maripos' bat. While Fang fights Maripos, BoBoiBoy takes the opportunity to release Gopal from the cocoon, but Maripos manages to detect BoBoiBoy and knocks him out of the tree. Fang became furious at Maripos' action and attacked again with a Shadow Wing Attack, but Maripos managed to dodge it.

Maripos was surprised to see that the group that had once beat Retak'ka wasn't as great as he thought they were, but Fang reminds him that Retak'ka lost because he was overconfident like Maripos is now, while removing his Shadow Trap that held Maripos' hands and feet so he can stab him with the Shadow Beak Stab. However, Maripos split half his body into a swarm of blue butterflies to avoid injury, and he re-merged and dropped Fang to the ground with his bat.

Meanwhile at the TAPOPS-U Canteen, Tok Kasa was served a Kangkong Goreng Tepung by Qually, when they received a warning signal regarding the match between BoBoiBoy and Maripos. Qually tries to enlist the help of Ying and Yaya, but Tok Kasa refuses and acts out on his own.

Ridiculed by Maripos for refusing to give in, BoBoiBoy turns into BoBoiBoy Thunderstorm and attacks him with a Thunder Blade Slash, but it was dodged. He also tried using Thunder Spear Rain and Double Slash, but it still didn't work. Maripos responded by turning his bat into a fan and used Libas Fan Jutsu to produce a strong wind to bring down BoBoiBoy.

Realizing that Maripos had wind-like powers, BoBoiBoy turns into BoBoiBoy Cyclone. Maripos is happy to see his opponent finally use the coveted power and asks him once again to surrender and comply with his request, but BoBoiBoy still wanted to fight. So they continued to fight, starting with Cyclone using a Typhoon Punch against Maripos. In a fairly fierce competition, Cyclone tries to buffer and retaliate against Maripos' attacks so that he can catch and throw his Libas Fan away.

Cyclone and Maripos continue to fight hand-to-hand. Cyclone uses a Hurricane Drill Attack on Maripos, but the nimble opponent splits, re-merges and unleashes his greatest ability, the Double Illusion Jutsu, using which he produces dozens of artificial images of himself to confuse Cyclone. Cyclone throws Air Disks towards all the images to find the real Maripos, but it was wasn't helpful. All the images counter-attacked Cyclone with repeated punches and kicks. Cyclone floated into the air and used a Double Vortex Strike to dissolve the images of Maripos while using his Hoverboard with the intention of striking Maripos.

Before Cyclone and Maripos could start fighting again, Tok Kasa arrived to break it up, assisted by a person in a dark blue robe. While the blue robed entity scolded Maripos, BoBoiBoy is upset with Tok Kasa’s actions and complained that Maripos had kidnapped Gopal. Tok Kasa explained that the situation before his eyes was not as expected. The robed person lowered her hood to reveal her face, and Tok Kasa introduced one of his old acquaintances, Kuputeri, the original owner of the elemental power of Wind who was presumed dead after being defeated by Retak'ka; and Maripos, who was Kuputeri's servant sent to guess BoBoiBoy's prowess. Tok Kasa asks Kuputeri to tell BoBoiBoy her true reason to visit Earth, and her answer was the same as Maripos' demand - to claim the power of Wind from BoBoiBoy. 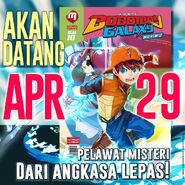 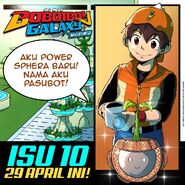 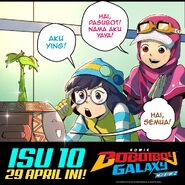 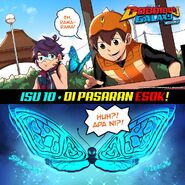 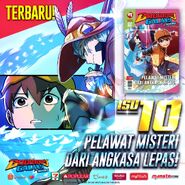 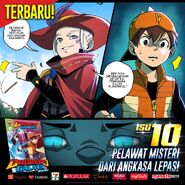 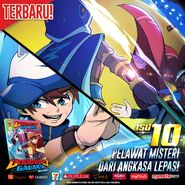