The Rampage of Cocoa Jumbo

Probe was dreaming about being attacked by PETAI from Season 2, Episode 12 and immediately woke up because of the nightmare. When Adu Du and Computer approached Probe, he forgot that his boss is Adu Du. Adu Du says that Probe is always delirious until he loses his memory. Suddenly, Probe saw something and uses Shrinking Pistol to shoot Adu Du but Adu Du replies back that he is his boss. To prove it, Adu Du gives an identification card of younger self to Probe but Probe said it is not the same and then transforms to Mega Probe, shooting Adu Du.

Computer states that Probe have shot Adu Du 21 times. To help recover Probe's memory, Computer contacted Bago Go and when Bago Go looked at Adu Du's face he was shocked because of his black face due from the attacks from Probe. So, Bago Go promotes his new weapon called "Homing Nuclear Weapon L9000" to help destroy Probe if he attacks his boss but Adu Du didn't want it. Probe states that the purpose for calling Bago Go is to recover his memory. Computer explained that Probe have lost his memory 39 times with 21 times accidentally attacking his boss. Bago Go has a solution to treat Probe's memory by purchasing the "Robey Robot XL 9000" (Season 3, Episode 3) but Adu Du rejected this because Bago Go had promoted that thing twice. Then Bago Go told Probe about the symptoms. Probe answered that he always imagined. Probe said that while strolling with his boss, he imagined that there was an evil robot that will follow him.

Bago Go also said that he is kind and sincere then Adu Du replied them that sincere can happen without payment. Then, Bago Go tells some symptoms about Probe such as delirious during midnight, lapthe se of memory, crazily imagined and raved and wander. Probe said that he did not wander but Bago Go states that it did not exist. Bago Go knows the disease which is chronic and lovesick but Adu Du became upset howabout his robot could have such kind of a disease and of course Ba,go Go is lying. Bago Go answered that he never lied, but Adu Du remembered that Bago Go bought Adu Du's Spaceship and exchanged it with the Electric Spatula (Season 1, Episode 12) before. Bago Go replied that by purchasing the spatula he would get the Mukalakus robot for free. Adu Du also lied to him that the converter could guarantee to resurrect Probe but resulted an in empty-minded Probe. Bago Go promotes the "Mind Raisins S900" to make the Probe's mind stronger. However, Adu Du became angrier when his lies to Bago Go by disconnecting the call, but Bago Go interrupts them. Then Bago Go suggested Adu Du his friend who is a memory loss specialist. Adu Du become vesry mad at him because of his tricks and he swears that he would never deal with him for a lifetime. Bago Go replied that his friend who is the "expert of all experts" of treating memory loss will come as soon as possible. Adu Du asks Bago Go what his friend looks like but Bago Go disconnects the conversation.

Immediately, there was someone was knocking on the base door, so Adu Du and Probe opens the door. It was Bago Go's friend, Wak Baga Ga. He came from a faraway place with his traditional clothes and has a Javanese accent to recover Probe's new memory. Adu Du was doubt with his appearance is similar to Bago Go, so Computer was doing a structure analysis about Bago Go and Baga Ga, with the results of 99% similarity to Bago Go and 1% similarity to Baga Ga. Baga Ga claimed that he is the "1%". Then Baga Ga states that every disease canbe reated with four steps, to ensure the disease exactly, perform early diagnosis and medicine, use the medicine and finally, payment.

Baga Ga inspects the Probe's body. He found something wrong in Probe's wires, and he lied to Adu Du that Probe's memory was in the 7th stage before the 8th stage which is chronic if not treated. So, Baga Ga was propose to do hypnosis by hypnotizing Probe using his chain pocket watch while Adu Du retelling his memories and relationships with Probe since first met from Sector 42 of Ata Ta Tiga. During hypnosis, Baga Ga hypnotized instead and immediately woke up. So the hypnosis continues with Adu Du remembered his past about his life were bored and unhappy but after he met with Probe, Adu Du became happier from him and becoming best friends. Suddenly, Probe interrupts the hypnosis that he is just Adu Du's vassal and stiff.

Baga Ga becoming mad to Probe by knocking his pocket watch until Probe hypnotized. Then Adu Du continued his story. Adu Du remembered that how he would get Ochobot and his old enemy relationships with BoBoiBoy and his friends, moreover when they nearly defeating his enemies by using Mukalakus from the tricker Bago Go, followed by the emergence of Ejo Jo who destoryed Probe and finally Adu Du working together with BoBoiBoy to defeat Ejo Jo, and the last one with the help of BoBoiBoy and (ironic) Bago Go, Adu Du have resurrected Probe. Adu Du concludes that Probe always loses his memory, and he will never willpower to lose his loyal friend anymore.

After the hypnosis session, Baga Ga claps his hands to wake up the hypnotized Probe, which means his conditions are becoming fine. Baga Ga also states that if Probe was not treated after "two Fridays" it will become more worse. Baga Ga suggests Pe to use his "Magiacl Scared Tongkat Bayam Wisdom Medicine". It can be used by applying to the affected area 30 times a day and it can be mixed with warm water and drops of limo be drink. This medicine was said to be very effective because it can treat the most common diseases including dengue fever, heartache, kidney pain, otitis, osteoporosis, pertussis, "oasis" and others and it was made from the rare ingredients including "the snow mushroom from the top of Wakakagewa Volcano, the tears of the 13th child of pregnant leopard, the broth of the giant spider web and the scared spinach leaves that plucked from the full-moon Tuesday night duthe ring second week of school holidays."

Probe was surprised with the medicine from Baga Ga and persuading Adu Du to buy this but Adu Du dousbt that this medicine was expensive. Luckily, Baga Ga told Adu Du that this medicine is free of charge because his life was ki,nd unlike Bago Go which is a cheater. Adu Du fesel relieved with the "free" part but Baga Ga explained that this medicine would be effective if they use the "magical cherry-brown wooden cup", using the steel cup would lose the effectiveness. Adu Du then tesll the price about the cup, Baga Ga answered that the cup price is RM80,000,000.80, making Adu Du topple with anxiety.

At outside, Baga Ga gave the medicine and magical cup to Probe. Baga Ga said to Probe to call him for the updates. Then Baga Ga give the receipt to Probe by opening Probe's hood and reconnect the wires, causing Probe's memory were restored. After Adu Du thanked taga Ga and flies away with his magical carpet, Bago Go wame. Immediately, Probe instantly transformed into Mega Probe and asked who is Baga Ga while arming the cannon. Bago Go persuades Probe that he is not Baga Ga but Adu Du accuse shim as ca heater. Bago Go havsdeclared that Baga Ga is a cheater and he only reconnect sthe wires in Probe's hood. This make sAdu Du angry and Probe was not satisfied with his explanation so Bago Go withdraewall credit charges from Baga Ga and returned the old spaceship to Adu Du. Finally, Bago Go pleading himself as Baga Ga so Mega Probe fired his laser cannon to Bago Go.

After that, Mega Probe pointed to Adu Du that he is Baga Ga's assistant. Immediately after Adu Du showed his identification card, Probe returned back to normal. Probe explained that he was pretending to lose his memory to claim back the money from Baga Ga. Adu Du became proud of Probe because he had reciprocated Bago Go's tricks. Suddenly, Baga Ga came back asking why the payment were withdrawn. Adu Du was shocked that Bago Go and Baga Ga are different persons so Probe immediately became Mega Probe and fired his laser cannon against them. 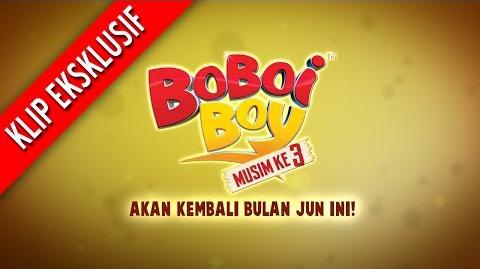 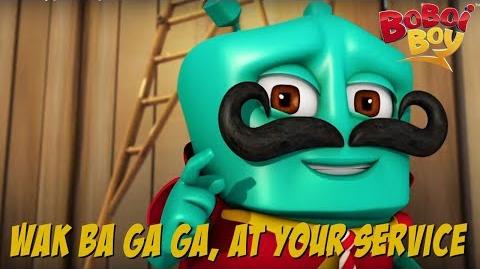 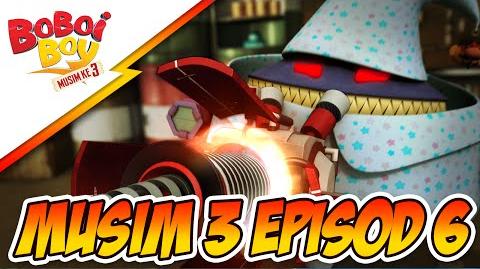