MotoBot is a character in BoBoiBoy Galaxy. He is part of the eighth generation of Power Spheres.

He is the Power Sphere found by Koko Ci. In Episode 1, he is hunted down by Space Pirates. Koko Ci contacts BoBoiBoy and escapes with MotoBot to Earth.

In Episode 2, while Koko Ci is still repairing the spaceship, MotoBot is kidnapped by Adu Du and Probe after they put Koko Ci, Gopal, BoBoiBoy and others (except for Tok Aba and Ochobot) to sleep. Koko Ci manages to track MotoBot down to an abandoned space station. He, BoBoiBoy and Gopal saved him from Adu Du and Probe.

MotoBot can produce high tech vehicles. The vehicles are designed to suit the driver's character, colour scheme and powers. The vehicles have glowing patterns and some can have cannons.

BoBoiBoy's Motorbike (side and back)

MotoBot: I am forced to join... 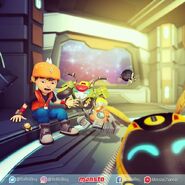 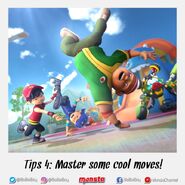