To protect the TAPOPS Space Station’s secrecy, BoBoiBoy and friends have to deliver a laundry package to one of the most dangerous planets in the galaxy.

The episode begins with Adu Du ranting to Probe and Computer about how BoBoiBoy is always interfering with his plans and how his clothes become dirty each time they are defeated. He sends Probe with the clothes to the laundromat.

At the TAPOPS station, Koko Ci is assessing the building for any damage done during Jokertu’s infiltration. He finds none, but worries that the true identity of the station has been compromised and there are not enough people to defend it since all but the new recruits have been turned into cards. He explains to BoBoiBoy’s gang that the station is actually known as a galactic laundromat to the public. TAPOPS utilises this guise to uncover any useful information from the many aliens that use the facilities, and can communicate with other TAPOPS members through laundry receipts.

As they talk, Probe arrives at the “laundromat” with the dirty clothes. Finding no staff at the reception, he goes further into the building and discovers BoBoiBoy‘s gang in the TAPOPS station’s control room. He listens as Koko Ci assigns BoBoiBoy, Gopal and Fang the mission of delivering three bundles of laundry to the dangerous Planet Dargha’ya. Probe deduces that this is the TAPOPS headquarters and slips away to inform Adu Du.

Koko Ci writes something onto a laundry receipt, sticks it onto one bundle and tells the boys to deliver them to the designated location. He sends them off without revealing who the receiver is, but gravely warns them to keep the bags spotless. Fang flies the three of them to Dargha’ya in his ship. Enroute, Gopal and BoBoiBoy theorise multiple nonsensical reasons as to what makes Dargha’ya so dangerous. Fang eventually snaps at them that it’s because it’s a dead planet reeking of decay. They don't notice Adu Du tailing them in order to stop their delivery, which he is certain will call for reinforcements to TAPOPS.

Both ships arrive at Dargha’ya in different locations, and Fang leads BoBoiBoy and Gopal to the drop-off spot. Adu Du, with a new weapon, rides off into the forest on Vehicle Probe. While the boys are traipsing through a forest, they hear a noise behind them. They continue without noticing a large figure they mistook for a tree leaving in the opposite direction. At the same time, Adu Du tests out his new weapon by firing it at the decaying trees until he realises they have strayed from the path as Probe forgot to bring the GPS. Blaming Probe for getting them lost, Adu Du hits him with the weapon until he loses control and they are flung over a drop into mud. The mud jams their communicator, leaving them unable to contact Computer to find them, much to Adu Du’s rage.

In the boys’ part of the forest they distantly hear Probe’s echoing plea for Adu Du to forgive him, which Fang blames on the wind. However, there turns out to be a huge tree-mimicking alien behind them that Fang recognises as a Tree Demon and runs for his life, calling for the other two to follow suit.

The Tree Demon pursues them and they briefly escape it by hiding behind a tree, which turns out to be another Tree Demon that tries to eat Gopal. Drawn by the noise, the first Tree Demon comes running to them, prompting BoBoiBoy and Fang to fight back. They win, but BoBoiBoy’s celebration is cut short when Fang reminds him that he accidentally threw Gopal into a tree when he rescued him and they run off to look for him.

A thoroughly exhausted Adu Du and Probe find Gopal just as the boys do. After requesting a 10 minute break, Adu Du brandishes his “super high-tech weapon” and fires it at them, only to have mud gush out. He takes advantage of his mud-clogged gun by shooting at the laundry bundles. The boys barely manage to protect bundles, so Fang takes them away on his Shadow Eagle with Mecha Probe in hot pursuit.

BoBoiBoy and Gopal ask Adu Du why he’s trying to stop them this time, and he reveals that he knows that their mission is to deliver a secret S.O.S. message on the laundry receipts. In the air, Probe is about to shoot a final mud blast at Fang when Gopal transforms his cannons and parts of his body into candy using his Food Sniper Blasts. Fang swoops in to break him apart, but drops the bundles in the process, allowing Adu Du a clear shot of them. BoBoiBoy rapidly transforms into Leaf and pulls the bundles away in time. Enraged, Adu Du aims at BoBoiBoy, but Probe falls on him and knocks him unconscious.

As Probe wheels Adu Du away, BoBoiBoy decides to let them go because they need to finish their delivery, the drop-off of which is nearby, according to Fang’s map. They make it to the location by nightfall where Fang contacts Koko Ci to let him know they succeeded. The commander asks if there were any complications and Gopal informs him that Adu Du and Probe were on the planet, much to his shock. In response to BoBoiBoy’s question, Koko Ci confirms that Adu Du was telling the truth about them delivering an S.O.S. and that since their mission has been compromised, they will need to deliver the message in person. Gopal wails in despair as their stay on Dargha’ya has been extended.

Gopal’s distant wail is enough to wake Adu Du. Upon realising that they have again been defeated, demands Probe turn around. Unfortunately, Probe hits something that looks like a tree, but are actually two Tree Demons that roar into the camera as the episode ends. 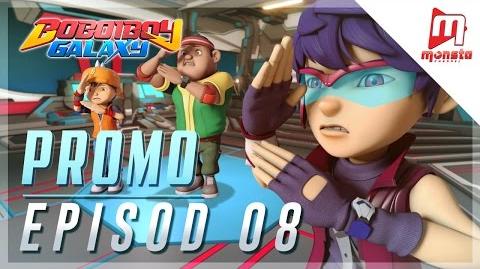 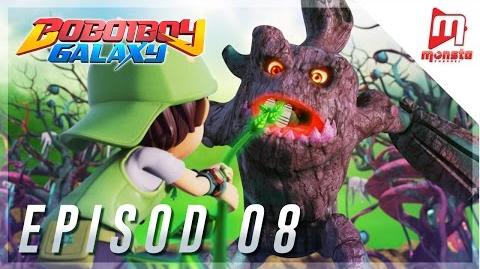