Melissa is one of the Rintis Island Primary School students. She has a twin sister named Melody.

She and her sister, along with Amy made a cameo when they are making fun of Fang as a weird boy as Gopal talked with them.

Every time the class starts a lesson, they are not seen in the classroom of 5 Honest, which means that they doesn't belong to that section at all.

Even though she doesn't belong to the 5 Honest class, she and her sister hide in the classroom of the 5 Honest when PETAI made an earthquake and damaged the school. She is also one of the students who was trapped by Ejo Jo in his spaceship and got shocked.

She is as tall as her sister. And like her twin sister, she is tan skinned, brown eyed, and chestnut-haired girl. She also wears the same uniform as her twin but they have a different color in their vest, rubber shoes and hairclip, her sister have pink while she have blue. 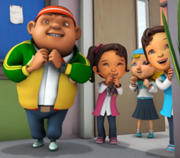