Maskmana is an admiral who is Captain Kaizo's mentor prior to the BoBoiBoy series.

Nothing is currently known about Maskmana’s early life, except that he is an admiral, a skilled swordsman and a “legendary hero” around the time Kaizo and Fang are children.

In response to an emergency signal sent from Planet GogoBugi, Maskmana arrives in time to save young Kaizo and Fang, and EnerBot from Bora Ra. Maskmana defeats Bora Ra in a brief battle by slicing one of his antennae off, allowing them flee to their spaceship. With the children and Power Sphere safe, Maskmana, he informs Kaizo of the signal he received, but is unable to tell him if his parents are safe after they sent it. Instead, he instructs Kaizo to let Fang grow up without any memory of the day's events. He's quick to agree with Kaizo when he berates himself for being too weak to defend his brother, clarifying that it was because he let his anger take over. Maskmana starts mentoring Kaizo in “The Way of the Mask”.

Maskmana makes his animated debut in the movie sequel, first as a member of the TAPOPS meeting on Kaizo's ship. Koko Ci explains that Retak'ka has been wreaking more havoc than they expected and they have to do something. Maskmana says that no one in the meeting can mitigate the calibre of his attacks, which Koko Ci admits to. He becomes furious when Kaizo reports during the meeting that Retak'ka has defeated the whole of Guruhan's Army.

Maskmana reappears when TAPOPS is evacuating the Cendawa Tribe from Planet Rimbara before Retak'ka can attack. He issues a command to deploy his Power Sphera ArmoBot to help Fang, Ying and Yaya so they can stand against Retak'ka.

He returns at the end of the movie alongside other TAPOPS members to congratulate BoBoiBoy on his victory against Retak'ka.

In a post-credits scene, Maskmana contacts another armoured hero named Amato to help him repair ArmoBot. When asked why he did not join the battle of TAPOPS against Retak'ka, Maskmana replies that he was not one of Retak'ka's opponent, and that Amato should have been the one to help BoBoiBoy. Amato disagrees, saying that he wants his son to be more independent in preparation for a bigger mission.

Maskmana contacted Amato and MechaBot to return to the ship after BoBoiBoy left for Rintis Island.

Maskmana is confident in battle, casually greeting Bora Ra upon entering the North Tower and calling him a coward for attacking children. His defeat of Bora Ra with a single strike proves he has the skills to back up his talk. His confidence may lend to his slightly theatrical nature, such as when he yelled out to make his sudden entrance even more dramatic.

In the comics, Maskmana wears a grey metal mask that looks to be split vertically in half. A cyan two-pronged pattern curves around its sides to the front, which may be eye spaces.

His appearance is similar to that in the comic except his mask and armor are silver instead of grey. The blue patterns on his mask glow and flicker when he speaks. 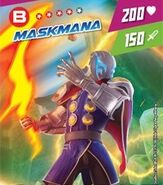 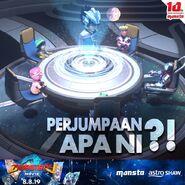 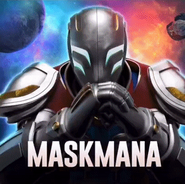