BoBoiBoy and his friends are planning to stop the attacks from Mama Zila where she becomes an OCD monster.

Continuing the previous episode, Mama Zila was evolved to the monster and made chaos around Rintis Island. Then she began put the car in color order so BoBoiBoy split into three. BoBoiBoy Thunderstorm and BoBoiBoy Cyclone go to stop Mama Zila while BoBoiBoy Quake stay behind. Then, he ask Papa Zola why Mama Zila is like that. He say that Mama Zila has OCD but the others don't know what it is and Papa Zola can't explain it properly so they call Yaya. She explains to them that OCD is Obsessive Compulsive Disorder and then tells them more about it. Gopal thinks that Yaya has OCD but that made her angry so he quickly ended the call.

Then, Mama Zila go to Rintis Mall parking lot and arrange all the cars in color order while Thunderstorm and Cyclone try to attack her. Their attacks have no effects, so Mama Zila proceeds to arrange the cars in the parking lot in colour order. Adu Du, Probe, Ochobot, Papa Zola and BoBoiBoy Quake show up. They see BoBoiBoy Cyclone trying to attack Mama Zila but instead she grabs him and turns his cap around the right way and zip up his jacket. Suddenly, she see the heights of the buildings are not the same so she goes to the town and makes the buildings either higher or lower. Papa Zola tries to talk to her but she steps on him instead. BoBoiBoy Thunderstorm tries to attack her with Thunder Blades but she straightens all blades and throws it back to them, electrocuting them all. Then, BoBoiBoy Quake uses his Earth Golem to hold Mama Zila, but Papa Zola asks him to stop. Then, they have idea to return her back to the game.

To bait her, they mess out the city and she was follow it. First, Cyclone made a sandstorm around her and the others move around some pot plants. When the wind stopped, Mama Zila began to put the pot plants back to the middle of the road. Next, Thunderstorm opened a lot of windows irregularly on buildings. Mama Zila quickly closed them and even arrange the pot plants on the window sills. Then, Gopal changed the streets to food and the cars started sliding around. This made Mama Zila very angry and she spent 1 hour putting the cars back in their proper places. After she finished that, Probe called her and showed her a row of trees on the sidewalk but one of them was shaped like Adu Du's head. Mama Zila used her sharp claws to prune all the trees to look like Adu Du's head. She follows the tree-line back to Gopal's house where Adu Du sucked her, BoBoiBoy, Gopal and Papa Zola back into the game to Mama Zila's castle.

They finally back to the game and shock to known that she was the real boss and not Gonohom Monster. They refused to fight by mess up the room and made chaos. But, Gopal tripped and Mama Zila stomped on him causing him to go back to the real world. Then Papa Zola got stomped on while he was mourning for Gopal. Now, BoBoiBoy must fight against Mama Zila. Realising he is alone, BoBoiBoy backs away from Mama Zila and accidentally knocks over a vase. That made Mama Zila extremely angry and she is about to stomp him too, then Ochobot quickly split him into three and the BoBoiBoys attacked Mama Zila directly with their powers. To finish her off, Cyclone slowly pushes over a flower vase which drains the last of her health. She then back to normal and the BoBoiBoys say "Awesome!"

Then they all go back to the real world while Mama Zila is still unconscious. Mama Zila wakes up in the real world and is reunited with Papa Zola. He explains that BoBoiBoy saved her and Mr. Kumar confirms this. She thanks BoBoiBoy and he says that the others helped too. Papa Zola also thank them and he gives them money but he only gives them 1 ringgit which makes them angry. Probe then takes Gopal's money and they fight over it until they rip it. Mama Zila became really angry again because they wasted the money and she chased Gopal and Probe down the street. Luckily she didn't become a monster again. The episode ends with Papa Zola being relieved about that and BoBoiBoy says "Awesome!" 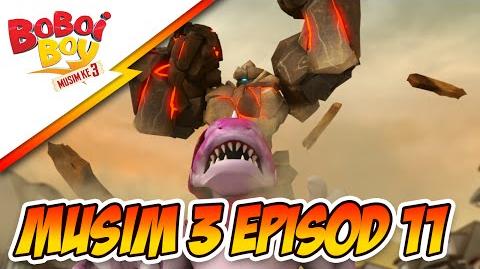